Warm floodwaters flow into the Arctic 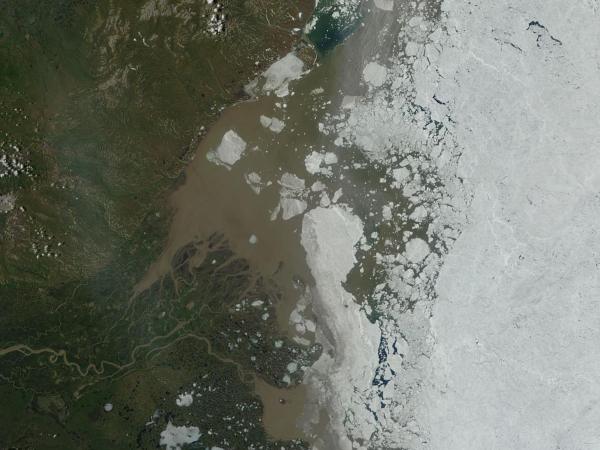 A record flood that inundated large regions of Canada last week is now sending a large pulse of silty water out through the Mackenzie Delta and into the Beaufort Sea. The pulse of floodwater is so large and bears so much silt that it has painted a wide section of the Arctic Ocean near the Mackenzie Delta brown.

You can see this major out-flow and brown coloration in the satellite image above, provided by NASA.

The fresh flood waters coming from the Mackenzie River are much warmer than the Arctic Ocean waters and the sea ice they contact as they push out from the continent. This flush of warmer water enhances sea ice melt even as it causes the local Arctic Ocean to heat up.

Large, warm flows of fresh water during spring and summer often initiate and enhance ice edge melt in the Arctic. They also rejuvenate the Arctic Ocean’s fresh water supply and, when combined with increasing glacial melt, serve to enhance the rate at which sea ice forms during fall and winter. The reason for this is that fresh water forms a protective layer keeping warmer, saltier water away from the ice even as it tends to freeze at a higher temperature than saltier ocean water. It is this combination of factors that is implicated in a temporary increase in sea ice coverage at the South Pole, even as atmospheric and ocean warming advance ice sheet melt there.

Since heat transfer to the Arctic Ocean from the continents via warm floods serves to increase ice melt rates in the summer season and since increasing flows of fresh water from both the continents (snow melt, increased summer storms) and glaciers (increasing rates of ice sheet melt brought on by human-caused warming) serve to enhance ice formation during the winter season, the Arctic is pushed to see-saw between record and rapid melt and rapid refreeze.

That said, an overall accumulation of heat in the Arctic Ocean has resulted in sea ice extent, area and volume decline during all seasons as the ice is unable to recover to past levels during winters. It’s just that the decline rate is fastest and most greatly amplified during summer.
The below graph, provided by Wipneus, displays this summer melt exaggeration: 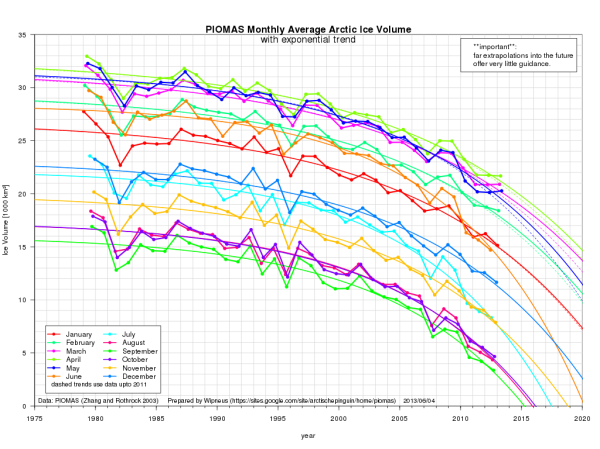 Note the faster rate of loss during June, July, August, and September when compared to months during other seasons.
New Ocean Circulation Transfers Most Fresh Water to Beaufort

Increasing flows of fresh water via snow, glacial melt, and more rainfall has now met with strange changes to Arctic Ocean currents, wind patterns and circulation that, according to NASA, is both preserving some of the thermohaline circulation in the Arctic and pulling more fresh water into the Canada Basin and Beaufort Sea.
A visual presentation of these changes is provided by NASA below:

In its press release, NASA noted:

Knowing the pathways of freshwater is important to understanding global climate because freshwater protects sea ice by helping create a strongly stratified cold layer between the ice and warmer, saltier water below that comes into the Arctic from the Atlantic Ocean. The reduction in freshwater entering the Eurasian Basin resulting from the Arctic Oscillation change could contribute to sea ice declines in that part of the Arctic.

NASA shows how changes in Arctic Ocean circulation have already re-distributed fresh water into the Beaufort Sea in the image below: 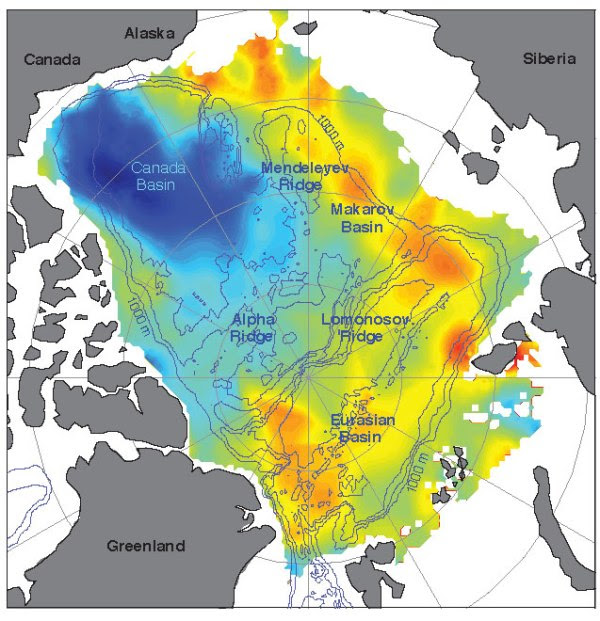 Higher concentrations of fresh water in the Beaufort would tend to preserve more sea ice there. Ironically, this ice is vulnerable to late-season melt due to its proximity to the North American Continent and away from the relative cool of Greenland. Higher salt water concentrations running from Greenland to the North Pole to the Laptev and then toward Wrangle Island would tend to enhance early season edge melt there.

Overall, this new distribution of fresh water combined with heat transfer into the Arctic Ocean via the continents makes it difficult to provide a case for long-term ice preservation under a regime of increasing human-caused warming. A fresh water cap near Greenland would have combined with cooler regional temperatures to preserve ice for longer periods there. Instead, we have the more resilient ice placed in close proximity to hot continental land rather than cold Greenland ice. Since these changes have yet to be fully understood, new reports will, hopefully, generate more clarity.

Emerging and amplifying flows of fresh water from both continents and glaciers along with changing Arctic Ocean circulation represent yet one more example of how human fossil fuel emissions are radically altering the Arctic. Though not quite as threatening as increasing releases from Arctic carbon stocks or as directly visible as an increasing number of heatwaves in the Arctic, these new pulses of fresh water, when combined with changing ocean circulation, are driving profound changes to the Arctic environment.

Posted by seemorerocks at 21:11