Syrian army, backed by jets, launches assault on Homs
Syrian President Bashar al-Assad's forces launched a major offensive on Saturday against rebels in Homs, a centre of the two-year-old uprising, in their latest drive to secure an axis connecting Damascus to the Mediterranean. 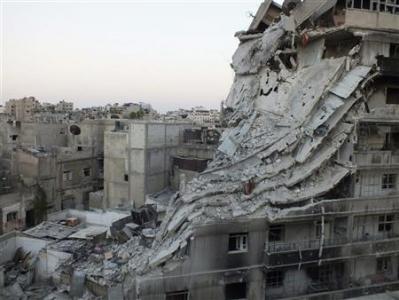 Activists said jets and mortars had pounded rebel-held areas of the city that have been under siege by Assad's troops for a year, and soldiers fought battles with rebel fighters in several districts.

"Government forces are trying to storm (Homs) from all fronts," said an activist using the name Abu Mohammad.

There were no immediate details of casualties but video footage uploaded by activists showed heavy explosions and white clouds of smoke rising from what they said were rebel districts. Loud, concentrated rounds of gunfire could also be heard.

One clip showed thick black smoke rising from a mosque identified as the 13th-century Khalid ibn al-Walid mosque, on the edge of the Khalidiyah neighborhood.

Syrian state media said the army was "achieving great progress" in Khalidiyah but the Syrian Observatory for Human Rights, an anti-Assad monitoring group, said there were reports that rebels had destroyed an army tank as troops tried to penetrate the Old City in the centre of Homs.

The attack on Homs follows steady military gains by Assad's forces, backed by Lebanese Hezbollah militants, in villages in Homs province and towns close to the Lebanese border.

Three weeks ago Hezbollah spearheaded Assad's recapture of the border town of Qusair, a former rebel bridgehead for smuggling in guns and fighters. Last week the rebels lost another border town, Tel Kalakh.

Those gains have consolidated Assad's control over a corridor of territory that runs from the capital Damascus through Homs to the traditional heartland of his minority Alawite sect in the mountains overlooking the Mediterranean.

They have also alarmed international supporters of the rebels, leading the United States to announce that it will step up military support. Saudi Arabia has accelerated deliveries of sophisticated weaponry, Gulf sources say.

The interventions by Sunni Muslim Saudi Arabia, a staunch backer of the mainly Sunni rebels, and Shi'ite Hezbollah highlight how the 27-month-old uprising has divided the Middle East along sectarian lines.

Gulf Arab States, Turkey and Egypt all support the rebels while Shi'ite Iran and Hezbollah are actively helping Assad whose Alawite community - an offshoot of Shi'ite Islam - has dominated Syria for more than four decades.

Sunni Islamist fighters from countries across the Middle East have also flocked to Syria, fighting for the rebels in a war that has killed more than 100,000 people, driven 1.7 million refugees abroad and displaced another 4 million within Syria's borders.

Hopes of holding a U.S. and Russian-backed peace conference have faded, with rebels reluctant to negotiate while they are on the defensive militarily and tensions between Moscow and Washington exacerbating their deep differences over Syria.

The violence has spilled over frontiers and stirred sectarian violence in neighboring Iraq and Lebanon. Two people were killed in Lebanon's northern city of Tripoli on Saturday, one in an explosion and another in sniper fire between the Alawite district of Jebel Mohsen and adjacent Sunni areas.

Despite losing ground around Damascus and Homs, rebels registered a symbolic victory on Friday when they overran a major military checkpoint in Deraa, the southern city where the uprising first erupted.

Rami Abdulrahman, head of the Syrian Observatory, said the fall of the army post was strategically significant and could change the balance of power in Deraa, where rebels control most of the old city.

The province of Deraa, on the border with Jordan, has been a conduit for arms supplies to the rebels.