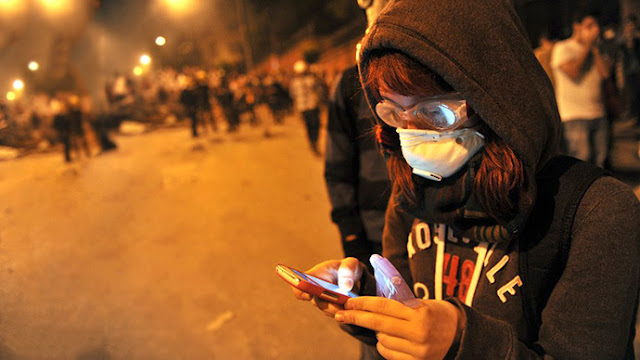 
In the latest attack on social media’s role in protests, the country’s Transportation and Communications Minister Binali Yildirim called on social media networks on Friday to cooperate with authorities in the probe.

"Yes to the Internet ... but an absolute no to its misuse as a tool for crimes, violence, chaos and disorder," Yildirim said quoted as saying by the local Dogan news agency.

Authorities have scoured social networks searching for protest leaders since national unrest began on May 28 at a rally in Instanbul's Taksim Square. Police have turned over at least 35 names to prosecutors in the city, according to Turkey's Aksam newspaper.

It is illegal to 'insult' public officials in Turkey.

Deputy Prime Minister Bekir Bozdag acknowledged the existence of the list, the Associated Press reported, only saying 'profanities and insults conducted electronically' had contributed to the protests.

'Crimes determined as such by the law don’t change if they are carried out through Facebook, Twitter or through other electronic means,' he said. 'No one has the right to commit crimes under the rule of law.'

Prime Minister Recep Tayyip Erdogan’s government has taken international criticism for the brutal police crackdown on protesters in the past month. The prime minister himself, when the rallies began, branded Twitter a 'troublemaker' used to spread 'lies.'

What began as a protest against the redevelopment of Istanbul's historic Gezi Park morphed into a national movement calling for a pluralistic society instead of Erdogan’s 'authoritarian' rule. The prime minister has also lost support for what critics say has been an attempt to impose Islamist values on a largely secular population.

He previously banned YouTube for two years beginning in 2008, citing the widespread presence of obscene material.

Erdogan’s deputies expressed hope that Facebook would allow them to comb through data and identify possible demonstration organizers. Facebook released a statement this week denying the disclosure, though, of any information to the government and expressing concern about future requests.

'We will be meeting with representatives of the Turkish government when they visit Silicon Valley this week, and we intend to communicate our strong concerns about these proposals directly at that that time,' Facebook said in a statement.

Turkish Minister of Transport, Maritime Affairs and Communications Binali Yildirim added that Twitter has not shown a 'positive approach' despite 'necessary warnings' from Turkey. He said that the Turkish government has asked Twitter, along with other social media sites, to set up a representative office inside the country.

'We have told all social media that...if you operate in Turkey you must comply with Turkish law… When information is requested, we want to see someone in Turkey who can provide this... there needs to be an interlocutor we can put our grievance to and who can correct an error if there is one,' he said.

'Twitter will probably comply too. Otherwise, this is a situation that cannot be sustained,' Yildirim stressed. His statement was presumably referring to social media’s role in the recent protests, though the social media companies themselves have had no role. He added that the government seeks only to 'turn down the volume of the social media,' rather than blocking it altogether.