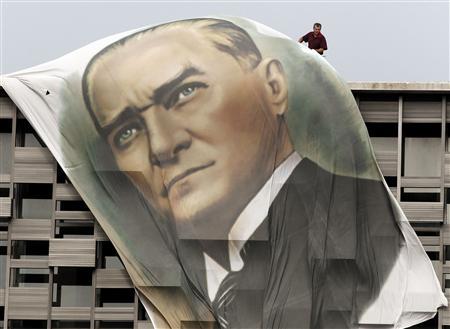 The incident, in Kayacik village in Diyarbakir province, appeared to be the most violent in the region since a ceasefire declaration by Kurdish rebel chief Abdullah Ocalan in March in the conflict between his Kurdistan Workers Party (PKK) and the Turkish state.

Hundreds marched in two central Istanbul districts to protest the event in Diyarbakir, a scene hardly imaginable in the city three weeks ago, before unprecedented anti-government demonstrations and riots in Istanbul. Those protests, unrelated to the 'Kurdish question', may have changed somewhat the attitude to protest in some sectors of society.

Turkey's main Kurdish party called earlier for marches in three major cities this weekend to launch a summer of protests to raise pressure on Ankara for reforms under a peace process with the PKK. Leaders said the rallies would be peaceful.

Diyarbakir Governor Cahit Kirac said around 200 protesters marched on Friday onto the construction site where the outpost was being built to replace an existing one, with some throwing petrol bombs and setting fire to workers' tents.

"At this point, the soldiers fired warning shots and a riot broke out. There were then reports of one person being killed and six people being wounded, two of them seriously. These reports are not confirmed, we are investigating," Kirac said.

"One citizen lost his life as a result of the shooting, ten people are wounded, three...heavily," the Kurdish Peace and Democracy Party (BDP) lawmaker and co-chairperson Gultan Kisanak said in a statement.

Kisanak called for the governor, mayor and the commander of the district to be removed as those "directly responsible for the attack."

PKK militants began withdrawing from Turkish territory to bases in northern Iraq last month as part of a deal between the state and Ocalan, imprisoned on an island south of Istanbul since 1999, to end a conflict that has killed 40,000 people.

There has been little evidence of progress this month with public attention focused instead on weeks of unrelated, broader and often violent anti-government demonstrations in cities across Turkey.

But the BDP said the withdrawal was continuing successfully and the process had entered a second stage during which Ankara needed to broaden the rights of Kurds, who make up some 20 percent of the 76 million population.

"The government must urgently take the necessary democratic steps, listen to the demands of the people and fulfill the requirements of the second stage," the BDP said in a statement declaring a summer of protest action.

It said it would start with marches on Sunday in Diyarbakir, Mersin and Adana, which were likely to attract thousands of demonstrators. Diyarbakir is the main city in the mainly Kurdish southeast. Mersin and Adana, in the eastern Mediterranean region, have large populations of Kurdish migrants.

Turkish authorities have had to deal with three weeks of street unrest in cities including Ankara and Istanbul this month in which riot police fired tear gas and water cannon to disperse demonstrators night after night.

The BDP protest on Sunday will call for a halt to the construction of military outposts in southeast Turkey, the release of political prisoners, education in Kurdish, lowering of the threshold of 10 percent electoral support required to enter parliament, and the release of Ocalan.

The BDP said it has presented to the government a 25-article proposal on which action needed to be taken urgently.

Turkish media said Prime Minister Tayyip Erdogan told a commission of "wise people" advising on the peace process this week that the peace process had still not entered the second stage as only 15 percent of PKK fighters had so far left Turkey.

BDP leader Selahattin Demirtas responded by saying that at least 80 percent of the militants had either left Turkey or were en route to their bases in northern Iraq.

The PKK, designated a terrorist group by Turkey, the United States and European Union, took up arms against the state in 1984 with the aim of carving out a Kurdish state, but subsequently moderated its goal to autonomy.