SEOUL - South Korea on Tuesday shut down two nuclear reactors and delayed the scheduled start of operations at two others as part of a widening investigation into a scandal involving fake safety certificates.

South Korea's nuclear power reactor in Gori near the southern port of Busan, is shown under construction February 5, 2013. South Korea on Tuesday shut down two nuclear reactors and delayed the scheduled start of operations at two others as part of a widening investigation into a scandal involving fake safety certificates.

The latest move means 10 of the South's 23 nuclear reactors are currently offline for various reasons, stoking fears of a possible energy shortfall this summer.

Nuclear power is meant to meet more than 35 percent of national electricity needs.

The Nuclear Safety and Security Commission (NSSC) said it had shut down two reactors -- one at the Gori nuclear complex and another at the Wolseong plant -- after learning that both had used parts supplied with forged quality warranties.

The scheduled resumption of another reactor under maintenance at Gori, and the start of a new reactor at Wolseong were postponed for the same reason, the commission said.

Parts used at all four reactors will have to be replaced, it added.

South Korea's nuclear sector has been dogged by a series of malfunctions, forced shutdowns and corruption scandals that have undermined public confidence already shaken by the 2011 Fukushima nuclear disaster in Japan.

All parts supplied for use in South Korean reactors require quality and safety warranties from one of 12 international organisations designated by Seoul.

Last year, officials said eight suppliers were found to have faked warranties covering thousands of items used in a number of reactors.

Although they were "non-core" components that presented no public safety risk, the authorities instigated an inspection of all reactors nationwide and ordered the replacement of any parts supplied with forged documentation.

Earlier this month, six nuclear power engineers and suppliers were jailed for their part in the scandal.

In May last year, five senior officials of the state-run Korea Hydro Nuclear Power Co. were charged with trying to cover up a potentially dangerous power failure at the country's oldest Gori-1 reactor.

Despite increasing public concern, the government has vowed to push ahead with its nuclear power programme, and plans to build an additional 16 reactors by 2030.

Many, if not all of our readers, saw the photo that was leaked out of the San Onofre Nuclear Generating Station to the press, which showed a massive pipe that had been leaking saltwater which had been directed into a floor drain using plastic, tape, and broomsticks.

“If that’s nuclear technology at work and that’s how we’re going to control leaks I think the public should know,” the inside source at San Onofre said. 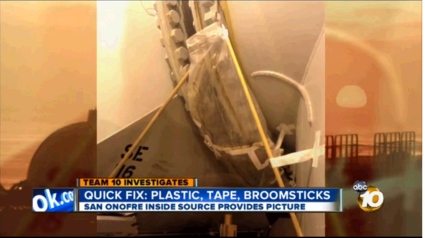 This week, TEPCO released their own version of this photo, which was taken inside of the crippled Unit 4 reactor building, showing a orange safety cone which has been flipped upside down to direct leaking materials into a hose which has been attached with duct tape. 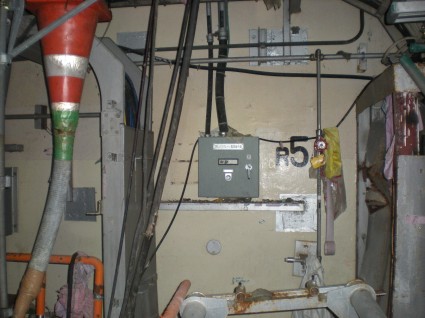 EPA: Radioactive waste at Bridgeton landfill poses no public danger
The Environmental Protection Agency says a March aerial survey of the West Lake Landfill in Bridgeton has determined radioactive waste buried there does not pose a danger to the public.

The agency scheduled a 2 p.m. press conference to focus on the results taken from the March 8 survey.

A plane was used during the survey to identify surface areas that emit gamma radiation. The aircraft was a specially equipped plane that can detect radiation and dangerous chemicals and has been used at the inauguration and the Super Bowl.

The 200-acre landfill contains two areas where waste from World War II-era nuclear weapons manufacturing was buried in the 1970s.

But the survey “determined that radiologically-contaminated wastes buried there in the 1970s remain contained within secure, fenced areas of the Superfund site, and do not pose public health risks,” according to the report issued by the EPA.

The agency said it would hold a public meeting at Pattonville High School on June 25 to further discuss the survey’s results, as well as future plans for the West Lake Landfill.

Area residents have long been concerned about the radioactive waste illegally dumped at the landfill and were encouraged by the initial testing in March.

“At the meeting they said that they were going to send a plane and they did and that’s encouraging,” said resident Dawn Chapman. “That shows that they’re not just giving lip service.”

But environmentalist group Missouri Coalition for the Environment responded with concern. According to spokesperson Ed Smith, the EPA only tested for one of three types of radiation.

"The concerns we have [are that] the alpha and beta radiation can attach to particles such as dirt and blow off site," he said.

The EPA responded by downplaying concerns.

"The state of Missouri did a radiation survey just this month which did not detect any radiation around the perimeter of the site, above background levels," said EPA project manager Dan Gravatt.

The report was released as operators of the landfill next door have been removing six pipes they believe will help eliminate a strong odor that is bothering residents who live nearby.

But a group of concerned citizens announced work being done to fix the smoldering deep within the site isn’t working.

The group, called Missouri Coalition for the Environment, said a fire continues to move toward the radioactive waste. They said it has moved 200 feet closer in the last three months.

The Missouri Department of Natural Resources has been monitoring the hot spots at the landfill, and posting the temperature readings online.

Organizers are now saying Republic Services has failed in taking the lead to fix the problem and it’s now time for the state and federal government to take over.
Republic Services responded to the concerns by releasing a statement.

“At currently measured rates of movement it would take more than 10 years (for the smoldering) to reach the edge of the north quarry,” the statement read.

The pipe-removal process, expected to last through mid-June, is also expected to make the smell worse for about two weeks. Eventually, the company will put a plastic cap over the landfill.

The company has offered to relocate about 270 households within a mile of the landfill while the work proceeds.

Still, others said they would remain in their homes for fear of theft.

A spokesperson for Republic Services said security should not be an issue. Bridgeton police officers have been be keeping an extra watch on the three neighborhoods involved in the voluntary evacuation.