Iranian statement in support of Syria

We have known this for about 3 years now. We are entering a dangerous phase right now 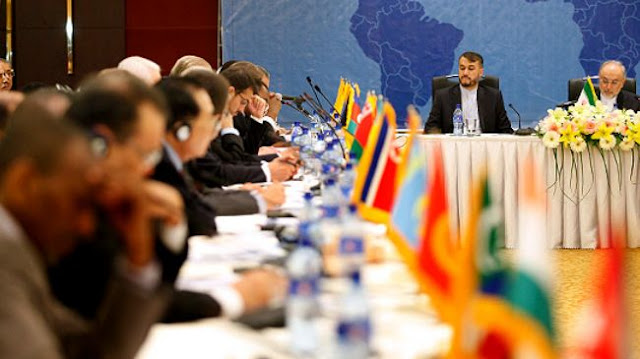 Hossein Amir-Abdollahian made the remarks on the sidelines of the Friends of Syria Conference in the Iranian capital, Tehran, on Wednesday. The international event was attended by representatives from around 40 countries with the aim of contributing to a political solution to the foreign-sponsored crisis in the Arab country.

“We will not allow the Syrian government to be overthrown. We strongly support the Syrian nation and government as well as the opposition that believes in a political resolution,” he added.

Amir-Abdollahian added that Iran will utilize its experiences in the region to prevent the collapse of the Syrian government.

Regarding Iran’s participation in a forthcoming international conference on Syria in Geneva, the Iranian diplomat said the Islamic Republic has been verbally invited to the meeting, but not in writing.

He said Iran will make a final decision on taking part in the conference after receiving a written invitation, adding, "During diplomatic talks, we have announced that because the focus of the Geneva conference is finding a political solution, we will consider any such invitation with a positive attitude."

On May 7, Russia and the United States agreed in Moscow to convene an international conference on Syria, which will serve as a follow-up to an earlier Geneva meeting held in June 2012. Russia has highlighted the need for Iran's presence in the forthcoming meeting.

Iran has repeatedly expressed its opposition to any foreign intervention in Syria's internal affairs, stressing that inclusive dialog and national reconciliation as well as free elections are the keys to resolving the unrest in the Arab country.

The crisis has gripped Syria since March 2011, and many people, including large numbers of Syrian security forces, have been killed in the unrest.
Posted by seemorerocks at 14:41