Good for exports. Aren't countries printing money in an effort to achieve this?

Australia's Dollar Slides to 19-Month Low gasoline demand at lowest since 2001
The Australian dollar tumbled to its lowest level since October 2011 in early Asia trade on Wednesday, extending this month's sharp slide against a broadly-stronger U.S. currency. 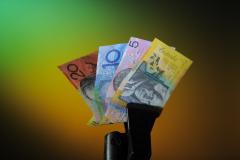 The latest catalyst for move in the Aussie dollar was stronger U.S. economic data overnight that pushed the greenback higher against all major currencies. Data published on Tuesday showed consumer confidence rose in May to its highest level in more than five years.

Analysts said the Australian dollar bore the brunt of the selling because sentiment has turned against the currency this month and traders were looking to see how far they could push the battered currency.

The Aussie dollar fell as low as $0.9570. It has shed some 8 percent so far this month, putting it on track to become the world's worst performing major currency. In May, the Aussie dollar has even underperformed the battered Japanese yen, which is down almost 6 percent.

"Over the last 24 hours the Australian dollar has been the weakest currency in the world and the sell-off is not just about a stronger U.S. dollar," said Nick Parsons, global co-head of currency strategy at National Australia Bank.

"People are asking themselves how far the Aussie dollar needs to fall to regain a degree of international competiveness and to look cheap again," he added.

The Aussie dollar, one of last year's best performing major currencies, has taken a beating this month amid weakness in commodities, signs of a slowdown in China, Australia's major trading partner and as talk of an early end to the Federal Reserve's asset purchase program lifts the U.S. currency.

"There is no doubt that sentiment towards Aussie remains highly negative, but with the pair so grossly oversold and so close to the 9500 cent level it now looks like a bargain to many reserve diversification officers across the world," said Boris Schlossberg, managing director of currency strategy at BK Asset