M7 slow release earthquake under Wellington
To the west of Wellington, the equivalent of a magnitude 7 earthquake is happening right now, 40 km below ground.

This would be Wellington’s largest earthquake in 150 years, yet nothing is felt at the surface. Even our sensitive earthquake recording instruments hardly notice a thing. This is because, unlike a normal earthquake, these plate movements happen very slowly in a process known as “slow-slip events”. This Kapiti slow-slip event is affecting an area spanning over 100 km from Levin to the Marlborough Sounds. Conventional earthquakes happen when one side of a fault moves past the other suddenly. A similar process occurs with slow slip, except it takes much longer for the fault to move and release energy, this is why slow-slip events are often called silent earthquakes.

GeoNet’s continuously-running GPS instruments in Wellington and Kapiti show that the Pacific and Australian tectonic plates are slipping past each other more rapidly than usual. This has been going on since January of this year, and will most likely continue for several months. These movements represent the equivalent of a magnitude 7 earthquake on the plate boundary, at 40 km depth.

Slow slip in New Zealand and the science behind it.

Slow-slip events are a relatively new discovery and are a very intriguing area of earthquake science. They are now recognised as a common occurrence at subduction zone plate boundaries around the world. Subduction is a process where one plate dives down or is “subducted” beneath another. In New Zealand subduction occurs at the Hikurangi Trough which is offshore of the east coast of the North Island, here the Pacific Plate subducts beneath the eastern North Island.

Plot of GPS stations over the last decade. The slow-slip events (SSE) are recorded on the three coloured stations but not on the black (Golden Bay) station as it's too far west. The general west-moving trend of the Kapiti stations is reversed during SSEs.

The GeoNet GPS stations are able to discern tiny land movements of millimetres over time. The stations show New Zealand deforming slowly as the Pacific and Australian Plates move past each other. During a slow-slip event, the GPS stations move more rapidly than normal over a period of weeks to several months or more. Recurring slow-slip events are seen in four regions in New Zealand: Kapiti, Manawatu, Hawke’s Bay, and Gisborne. The Kapiti and Manawatu events are characteristically different from the east coast slow-slip events. They are deep, larger events that occur over several months to a year, recurring every 5 years. In contrast, the Hawke’s Bay and Gisborne events are shallower at less than 10-15 km, are shorter (lasting only a few weeks), and occur every 1-2 years. The Kapiti and Manawatu slow slip events are the most regular, but are the least frequent of any in New Zealand.

If we can’t feel them, then why should we care about slow-slip events?

Slow-slip events sometimes interact with each other, as well as conventional earthquakes, and it is this relationship that has researchers so intrigued. There are numerous instances where earthquakes large enough to be felt have been accompanied or even triggered by slow-slip events and vice versa. A recent example is the earthquake swarm off the coast of Wairoa which was accompanied by a short-lived slow-slip event nearby beneath Hawke Bay.

The GeoNet GPS network also revealed that different parts of New Zealand’s subduction zone behave differently. Some areas are completely locked together and only move with an earthquake. In other areas, the plates move freely past each other without generating earthquakes. Slow-slip events take place in the transition between the areas that are “locked” and those that are freely slipping. Thus, it is also extremely important to map out the regions of slow slip in detail using continuous GPS, in order to help understand which portions of the plate boundary are prone to rupture in large earthquakes.

Substantial research efforts are underway by scientists in New Zealand and internationally to better understand why slow-slip events occur, and how they impact fault stresses and conventional earthquakes. It is important to know how similar we are to other regions of the world – such as Japan – that have recently experienced large earthquakes and damaging tsunami. What we do know is that the New Zealand slow-slip events accommodate about 40% of the tectonic plate movement in the North Island; this means that slow slip events are a huge part of the puzzle of New Zealand’s tectonic processes. 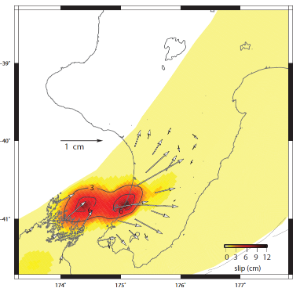 The Kapiti slow-slip event's movement from January to May. The most extreme movement, depicted by the darkest colour, is under Otaki and north of Marlborough Sounds.
Posted by seemorerocks at 19:45