Earthquakes have far-reaching effects on the Earth's crust

Big Earthquakes Create Global-Scale GPS Errors
Thirteen years of supersized earthquakes, such as today's (May 24) magnitude-8.3 in Russia, have contaminated GPS sites around the world, a new study finds. 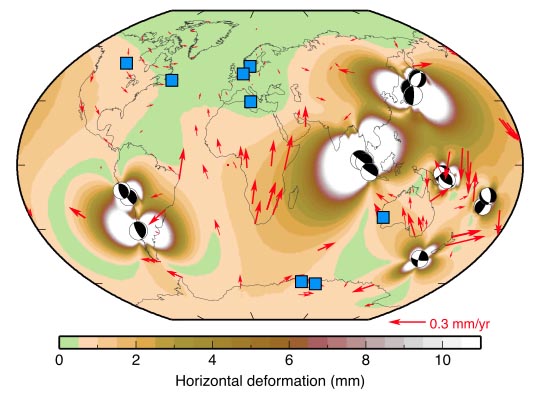 The Global Positioning System is a network of satellites and ground stations that provide location information anywhere on Earth. Except for spots in Australia, western Europe and the eastern tip of Canada, every GPS site on the ground underwent small but important shifts since 2000 because of big earthquakes, according to a study published May 6 in the Journal of Geophysical Research: Solid Earth.

The research confirms that great earthquakes, those bigger than magnitude 8.0, can have far-reaching effects on the Earth's crust. And because GPS is critical for everything from calculating satellite orbits to sea level rise to earthquake hazards, scientists can't ignore these tiny zigs and zags, the researchers conclude.


"We have to find a way to deal with it," said Paul Tregoning, lead study author and a geophysicist at Australia National University in Canberra. "The community needs to work out how to find all the offsets, estimate them accurately and get everyone to agree on how to correct them," he told LiveScience.

Tregoning and his colleagues modeled the sudden jolts in Earth's crust from each of the 15 biggest earthquakes since 2000. They discovered that crust thousands of miles away from the faults had moved horizontally by as much as a tenth of an inch (a few millimeters). The model was checked against a few spots around the planet. On average, the earthquakes deformed the crust by a hundredth of an inch every year (0.4 millimeters a year) — about the width of the lead in a mechanical pencil. [7 Craziest Ways Japan's Earthquake Affected Earth]

"It's quite amazing to us that we can see this and detect this," Tregoning said.

These tiny effects won't make a difference to the GPS in cars or phones, or the tough little units carried by hikers and mountaineers. But scientists who need precise measurements to calculate sea level rise or satellite orbits should be concerned, Tregoning said.

Here's why these seemingly small changes matter. Scientists who rely on GPS need to compare one place to another. There are a handful of stable spots around the world, usually in the interior of continents, called the terrestrial reference frame. For example, a geologist measuring the speed of the Pacific plate would compare it with the North American reference frame. But Tregoning's study shows these stable spots were shifted by the massive earthquakes.

Disturbing the reference frame will introduce errors into GPS measurements, Tregoning said. It could also throw off calculations of satellite orbits. "If the coordinates of the tracking stations are wrong, then the orbit isn't right either," he said.

"I think he's identified a good problem," said Don Argus, a principal research scientist at the Jet Propulsion Laboratory (JPL) in Pasadena, Calif., who was not involved in the study. Argus is part of a group that uses GPS to calculate satellite orbits and conduct research on the changing Earth.

"It's difficult to find a stable frame with these post-seismic transients," Argus said. "The earthquakes are making things a little hard for the people on our floor."

While Argus and his colleagues already account for the deformation caused by earthquakes, it takes computers at JPL 24 hours to churn through the calculations, Argus said. "I've got the best plate motion model out there," he told LiveScience.

Tregoning hopes that the next update to the International Terrestrial Reference Frame System, the internationally agreed upon reference for GPS research, will consider the wide-ranging effects of big earthquakes.

"We have to agree on how to improve the reference frame," he said. "People doing regional studies will find that they potentially get a different answer, and it will potentially be a more accurate answer."


Editor's note: This story was updated May 24 to include information about the May 24 Okhotsk earthquake.