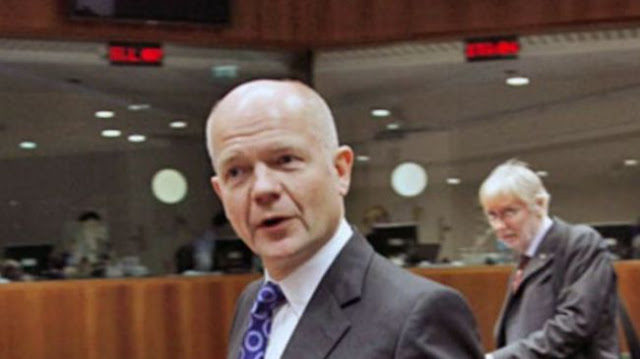 
William Hague was speaking in Brussels ahead of a meeting of EU foreign ministers, where he did his best to persuade his counterparts of the need to lift restrictions on the supply of weapons to Syrian rebels.

He claimed that extremism in Syria could flourish if the European Union refused to ease an arms embargo preventing the supply of weapons to rebels and mercenaries fighting the popular government of President Bashar Assad.


Hague added that the current state of affairs could not be allowed to continue.
This comes as the EU arms embargo against Syria officially expires at the end of the month.


Hague used the opportunity to warn his counterparts that if the status quo continued and the EU failed to agree on united front then each country would be able to adopt its own approach, which means the UK government would continue supplying heavy weaponry to the terrorists in Syria in their attempt to topple the legitimate government of the crisis-hit country.


The UK and France have led calls for the embargo to be relaxed, but Hague acknowledged their position did not have universal support within Europe.


"There is a difference over what it's appropriate now for the EU to do. In our view it's important to show that we are prepared to amend our arms embargo so that the Assad regime gets a clear signal that it has to negotiate seriously”, he claimed.


"Therefore for us amending the embargo is part of supporting the diplomatic work to bring about the political solution”.


This is while that the government of President Bashar al Assad has been calling for talks with the real opposition parties of the country from the beginning of the conflict, but rejecting negotiations with foreign-backed terror groups who are seeking to undermine the resistance front in the Middle East region, therefore propping up the Zionist regime of Israel.