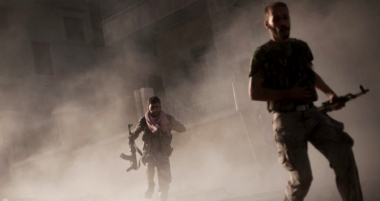 A spokesman for the primary rebel alliance in Syria, known as the “Free Syrian Army,” threatened that opposition forces could start implementing a broad ethnic-cleansing program aimed at Shia Muslims and especially the Islamic Alawite sect to which dictator Bashar al-Assad belongs. As Obama administration-led Western powers and a coalition of Sunni Arab dictators continue to fuel the increasingly ruthless conflict, the rebel FSA spokesperson said in a TV interview that minority communities would be “wiped off the map” if the regime’s forces managed to capture the city of Al-Qusair.

The genocide announcement came shortly after Sen. Rand Paul (R-Ky.) blasted his Senate Foreign Relations Committee colleagues for voting to arm the rebels, many of whom openly fight under the banner of al-Qaeda. “This is an important moment,” Sen. Paul said about the vote. “You will be funding, today, the allies of al Qaeda.” While the U.S. government has been supporting the opposition since before open warfare began, Obama has ramped up that support to unprecedented levels. And now, a Senate committee has expressed its backing for arming groups that openly threaten to exterminate minorities.

According to a report in Bloomberg, rebel Free Syrian Army “Colonel” Abdel-Hamid Zakaria made the threat to exterminate minority-denomination Muslims in Syria during an interview from Turkey last week with Al-Arabiya television. “We don’t want this to happen, but it will be a reality imposed on everyone,” Zakaria said during the interview, referring to his alliance wiping certain minority communities off the map if regime forces succeeded in taking Al-Qusair. “It’s going to be an open, sectarian, bloody war to the end.”

The city in question, located in central Syria’s Homs province, is seen as crucial due to its strategic location along a major highway connecting the capital Damascus to the coast. It is considered extremely important by rebel forces, which rely on it to obtain weapons and supplies from neighboring Lebanon. For the regime, the city’s value is obvious as it continues to wage war on foreign-backed Islamists described by officials as “armed terrorist groups.”

Regime-run media outlet SANA reported that most of the city was captured last week, with troops loyal to Assad reportedly seizing vast weapons stockpiles and destroying tunnels used by rebel forces. Dozens of opposition fighters were reportedly killed in the battles. More than 20 members of the U.S. government-designated terror group Hezbollah, a Lebanese militia that has joined Assad in the effort to stop the rebels, were also killed, according to news reports.

Opposition spokesmen said the fight for Al-Qusair was ongoing, though everyone acknowledges that government troops had at least made very significant inroads in re-capturing the city. “The Syrian Coalition warns about the outcome of these distressing developments, which come as part of an organized and predetermined military campaign,” read a statement released by the Western-backed Syrian National Coalition, an opposition umbrella group dominated by the Muslim Brotherhood and other Islamist forces.

Despite the reported near victory of regime troops in Al-Qusair, it remains unclear whether the ethnic-cleansing plot outlined by the Free Syrian Army spokesman in the TV interview has been formally put into effect. As The New American has documented extensively, minority communities — especially Christians — have long been targeted by rebel forces throughout the ongoing war. However, if the brazen threat of extermination is officially implemented, the results will be unimaginable bloodshed and horror beyond even what has been witnessed so far, experts say.

Sunni Muslims, who dominate domestic rebel forces, make up a significant majority of the population in Syria, possibly as much as three-fourths or more of the 22 million people. Minority groups, however — Shiites, Christians, Jews, and others — represent an estimated 20 to 30 percent of Syrians. Members of virtually all minority communities have been targeted by one rebel group or another due, at least in part, to their perceived support of the secular regime, which largely protected minorities from Islamist violence despite Assad’s iron-fisted rule.

It is not the first time that foreign-backed Sunni Islamist rebels have threatened to exterminate minorities in Syria. In fact, earlier this month, an opposition brigade commander ate a body organ from a dead government soldier in front of a video camera and promised to do the same with others, boasting about slaughtering — and eating — members of the Alawite community to which Assad belongs.

“I swear to God, soldiers of Bashar, you dogs — we will eat your heart and livers! Takbir! God is Great!” commander Khalid al-Hamad with the “Independent Omar al-Farouk Brigade” says in the video, words that he later defended in interviews with Western media outlets. “Oh my heroes of Baba Amr, you slaughter the Alawites and take their hearts out to eat them!” After the brief speech, the Sunni rebel took a bite out of the organ in a video that drew international condemnation.

The Free Syrian Army and other rebel groups promptly distanced themselves from the cannibal commander, saying cannibalism was against Syrian values. FSA spokesmen and the SNC called on the rebel leader to be held accountable, and human rights groups around the world said the video was yet more evidence of the exploding horror now being felt throughout much of Syria. Despite strongly worded statements against cannibalism issued by other rebel leaders, the monstrous video was hardly the first example of the barbaric sectarianism that has reared its head in the nation amid the ongoing conflict.

As The New American has been reporting virtually since the start of the war, the ethnic cleansing of Christians by rebel forces began quickly after open hostilities broke out. In April of last year, for example, multiple churches, aid organizations, and human rights groups reported that the Christian minority — estimated at about 10 percent of the population before the war started — was being massacred and driven from its homeland in growing numbers.

At the time, the Syrian Orthodox Church, which represents over half of Syrian Christians, issued a statement saying revolutionary fighters had expelled some 50,000 Christians from the embattled city of Homs. That figure was estimated to account for about 90 percent of the Christian community in the city. Hundreds more Christians — including women and children — were slaughtered, according to charitable organizations operating in the area.

The Orthodox Church referred to the persecution as the "ongoing ethnic cleansing of Christians" by Muslim militants linked to al Qaeda. According to its report, the so-called “Brigade Faruq” was largely to blame, with Islamic extremists going door to door and forcing followers of Christ to leave without even collecting their belongings. Their property was then stolen by rebels as "war-booty from the Christians."

Christians in Homs were reportedly told by rebels that if they did not leave immediately, they would be shot. Then, pictures of their brutalized dead bodies would be sent to the pro-Syrian-regime-change Al Jazeera — a media broadcaster controlled by the dictatorship ruling Qatar, which is arming and funding the rebels — with a message claiming that forces loyal to Assad had murdered them. It would hardly be the first time opposition fighters perpetrated atrocities and blamed the regime.

Aid agencies also documented the terror aimed at minorities, especially among the church. "Christians are being forced to flee the city to the safety of government-controlled areas,” noted a spokesman for the Christian relief agency Barnabas Fund, which reported that over 200 Christians had been murdered by insurgents at the time. “Muslim rebel fighters and their families are taking over their homes."

Other reports noted that Christians were being kidnapped by rebels for use as human shields. "Some Christians who tried to escape a week ago were stopped from leaving by the rebels and were instead forced to go to a mosque to act as shields," a Syrian priest from Hamidiya was quoted as saying by the U.K. Daily Telegraph. "They thought that, because Christians support Assad, the government would not attack them."

According to reports from sources on the ground, Muslim militias also used churches to attack government forces. “Most of the time militiamen were using the churches and the Christians as shields to protect themselves from shelling,” explained regional director Issam Bishara with the Catholic Near East Welfare Association (CNEWA). “It is also important to mention that some icons inside the churches were damaged on purpose by the militias.”

Since then, the brutality has only gotten worse, and countless numbers of Christians have been forced to flee into neighboring countries to avoid the brutality and slaughter. The ancient Christian communities, which were protected by the secular Assad regime, feared genocide if the dictatorship were to eventually fall and be replaced by a Sunni Muslim theocracy — as rebels hope. Analysts said those concerns were well founded.

Such a development would also be in line with what has occurred in other nations where the U.S. government has intervened. In Iraq, for example, the ancient Christian communities were all but eradicated following the American-led, United Nations-approved military invasion and occupation. Many fled to Syria. Following the Obama administration-backed so-called “Arab Spring,” Christians are also under fire in Egypt, Libya, and other nations. President Obama’s unconstitutional war on Libya led to ethnic cleansing of blacks by U.S. government-backed “rebels” as well.

The U.S. and Russian governments are currently planning to host an international conference about the Syrian war in Geneva next month, and the Assad regime has agreed “in principle” to participate. Of course, the Obama administration and its allies, including European powers and ruthless Muslim dictators, have been bankrolling, arming, and training rebel forces for “regime change.” On the surface, Russian authorities have been publicly backing the Assad regime, supplying weapons and international support.

While foreign powers continue to pour fuel on the already-blazing inferno raging in Syria, estimates suggest as many as 100,000 people have been killed. An estimated 1.5 million have already fled abroad. The number of tragedies and the ferocity of the human rights abuses, meanwhile, continue to soar, with innocent civilians paying the heaviest price.

Whether rebel forces will openly begin an ethnic cleansing program to eradicate non-Sunni Muslims, as threatened by the FSA spokesman last week, remains to be seen. However, it appears that minority communities in Syria are already the most vulnerable, and if rebel forces do eventually seize power, the future of Christians, Jews, Shias, and Alawites in Syria is uncertain at best.

Alex Newman, a foreign correspondent for The New American, is currently based in Europe. He can be reached atanewman@thenewamerican.com.