Geoengineering: Our Last Hope, or a False Promise?
We should not try to play God with the planet 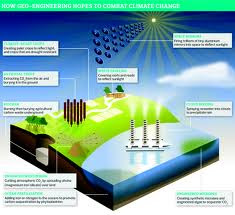 CANBERRA, Australia — THE concentration of carbon dioxide in the earth’s atmosphere recently surpassed 400 parts per million for the first time in three million years. If you are not frightened by this fact, then you are ignoring or denying science.

Relentlessly rising greenhouse-gas emissions, and the fear that the earth might enter a climate emergency from which there would be no return, have prompted many climate scientists to conclude that we urgently need a Plan B: geoengineering.

Geoengineering — the deliberate, large-scale intervention in the climate system to counter global warming or offset some of its effects — may enable humanity to mobilize its technological power to seize control of the planet’s climate system, and regulate it in perpetuity.

But is it wise to try to play God with the climate? For all its allure, a geoengineered Plan B may lead us into an impossible morass.

While some proposals, like launching a cloud of mirrors into space to deflect some of the sun’s heat, sound like science fiction, the more serious schemes require no insurmountable technical feats. Two or three leading ones rely on technology that is readily available and could be quickly deployed.

Some approaches, like turning biomass into biochar, a charcoal whose carbon resists breakdown, and painting roofs white to increase their reflectivity and reduce air-conditioning demand, are relatively benign, but would have minimal effect on a global scale. Another prominent scheme, extracting carbon dioxide directly from the air, is harmless in itself, as long as we can find somewhere safe to bury enormous volumes of it for centuries.

But to capture from the air the amount of carbon dioxide emitted by, say, a 1,000-megawatt coal power plant, it would require air-sucking machinery about 30 feet in height and 18 miles in length, according to a study by the American Physical Society, as well as huge collection facilities and a network of equipment to transport and store the waste underground.

The idea of building a vast industrial infrastructure to offset the effects of another vast industrial infrastructure (instead of shifting to renewable energy) only highlights our unwillingness to confront the deeper causes of global warming — the power of the fossil-fuel lobby and the reluctance of wealthy consumers to make even small sacrifices.

Even so, greater anxieties arise from those geoengineering technologies designed to intervene in the functioning of the earth system as a whole. They include ocean iron fertilization and sulfate aerosol spraying, each of which now has a scientific-commercial constituency.

How confident can we be, even after research and testing, that the chosen technology will work as planned? After all, ocean fertilization — spreading iron slurry across the seas to persuade them to soak up more carbon dioxide — means changing the chemical composition and biological functioning of the oceans. In the process it will interfere with marine ecosystems and affect cloud formation in ways we barely understand.

Enveloping the earth with a layer of sulfate particles would cool the planet by regulating the amount of solar radiation reaching the earth’s surface. One group of scientists is urging its deployment over the melting Arctic now.

Plant life, already trying to adapt to a changing climate, would have to deal with reduced sunlight, the basis of photosynthesis. A solar filter made of sulfate particles may be effective at cooling the globe, but its impact on weather systems, including the Indian monsoon on which a billion people depend for their sustenance, is unclear.

Some of these uncertainties can be reduced by research. Yet if there is one lesson we have learned from ecology, it is that the more closely we look at an ecosystem the more complex it becomes. Now we are contemplating technologies that would attempt to manipulate the grandest and most complex ecosystem of them all — the planet itself. Sulfate aerosol spraying would change not just the temperature but the ozone layer, global rainfall patterns and the biosphere, too.

Spraying sulfate particles, the method most likely to be implemented, is classified as a form of “solar radiation management,” an Orwellian term that some of its advocates have sought to reframe as “climate remediation.”

Yet if the “remedy” were fully deployed to reduce the earth’s temperature, then at least 10 years of global climate observations would be needed to separate out the effects of the solar filter from other causes of climatic variability, according to some scientists.

If after five years of filtered sunlight a disaster occurred — a drought in India and Pakistan, for example, a possible effect in one of the modeling studies — we would not know whether it was caused by global warming, the solar filter or natural variability. And if India suffered from the effects of global dimming while the United States enjoyed more clement weather, it would matter a great deal which country had its hand on the global thermostat.

So who would be turning the dial on the earth’s climate? Research is concentrated in the United States, Britain and Germany, though China recently added geoengineering to its research priorities.

Some geoengineering schemes are sufficiently cheap and uncomplicated to be deployed by any midsize nation, or even a billionaire with a messiah complex.

We can imagine a situation 30 years hence in which the Chinese Communist Party’s grip on power is threatened by chaotic protests ignited by a devastating drought and famine. If the alternative to losing power were attempting a rapid cooling of the planet through a sulfate aerosol shield, how would it play out? A United States president might publicly condemn the Chinese but privately commit to not shooting down their planes, or to engage in “counter-geoengineering.”

Little wonder that military strategists are taking a close interest in geoengineering. Anxious about Western geopolitical hubris, developing nations have begun to argue for a moratorium on experiments until there is agreement on some kind of global governance system.

Engineering the climate is intuitively appealing to a powerful strand of Western technological thought that sees no ethical or other obstacle to total domination of nature. And that is why some conservative think tanks that have for years denied or downplayed the science of climate change suddenly support geoengineering, the solution to a problem they once said did not exist.

All of which points to perhaps the greatest risk of research into geoengineering — it will erode the incentive to curb emissions. Think about it: no need to take on powerful fossil-fuel companies, no need to tax gasoline or electricity, no need to change our lifestyles.

In the end, how we think about geoengineering depends on how we understand climate disruption. If our failure to cut emissions is a result of the power of corporate interests, the fetish for economic growth and the comfortable conservatism of a consumer society, then resorting to climate engineering allows us to avoid facing up to social dysfunction, at least for as long as it works.

So the battle lines are being drawn over the future of the planet. While the Pentagon “weaponeer” and geoengineering enthusiast Lowell Wood, an astrophysicist, has proclaimed, “We’ve engineered every other environment we live in — why not the planet?” a more humble climate scientist, Ronald G. Prinn of the Massachusetts Institute of Technology, has asked, “How can you engineer a system you don’t understand?”


Clive Hamilton, a professor of public ethics at Charles Sturt University, is the author, most recently, of “Earthmasters: The Dawn of the Age of Climate Engineering.”