Collapse of concensus over arms shipments

EU fails to agree deal over Syrian rebel weapons embargo
Austrians blame collapse of sanctions consensus on UK, which, along with France, had been pushing to arm rebel 'moderates' 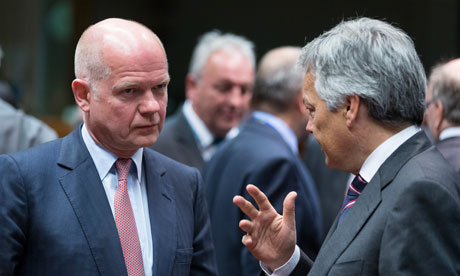 
Europe's sanctions regime against Syria collapsed on Monday night, the Austrian government said, after William Hague, the foreign secretary, failed to secure a lifting of the EU arms embargo.

Michael Spindelegger, the Austrian vice-chancellor and foreign minister, voicing anger at the outcome, directly blamed the collapse on the UK, with the sanctions regime ending at midnight on Friday.

"It has failed," he said. "I'm a little annoyed … It's regrettable that we have found no common position."

He added that France joined Britain in demanding a lifting of the arms embargo, in order to supply weapons to what they identify as call the "moderate" opposition to Bashar al-Assad's regime, but that the other 25 member states were opposed.

The ministers continued talks late on Monday but, Spindelegger said, merely to formulate a public statement that would paper over the deep divisions.

Laurent Fabius, the French foreign minister, had earlier said that Paris supported a decision that would maintain an EU consensus, but would allow "the rebels to have the necessary arms and that the arms could be monitored".

The UK foreign secretary, William Hague, joined the French in arguing that supplying arms to "moderate" opposition forces would lead to less killing in Syria. Others argued the opposite; that arms supplies would only escalate the conflict.

Several countries – notably Austria, the Czech Republic, Finland, the Netherlands and Sweden – opposed it for fear that weapons might fall into the hands of Islamic extremist groups such as Jabhat al-Nusra. Germany has been trying to fashion a compromise.

Guido Westerwelle, the German foreign minister, said ahead of the meeting he would try to "build bridges", but consensus looked elusive, with participants delivering contradictory statements.

Both Westerwelle and Hague had warned that the EU could fail to agree a common position on the sanctions package, which expires automatically on Friday if there is no consensus – a situation that now appears to have come to pass.

Hague added that if the negotiations collapsed, individual EU states would have to mount their own national sanctions against the Assad regime. Britain and France have been pressing for a partial lifting of the arms embargo to moderate sections of the Syrian opposition since November.

Hague has argued that lifting the arms embargo would complement rather than contradict a peace process, since a militarily strengthened Syrian opposition can force the Syrian president, Bashar al-Assad, to the negotiating table.

Fabius returned early to Paris to meet John Kerry, the US secretary of state, and Sergei Lavrov, the Russian foreign minister, to try to organise Syrian peace talks in Geneva next month. No date has been set for the talks. It is not clear who will attend. Any agreement on easing the arms embargo would be likely to delay future weapons shipments until after the Geneva talks.

In Brussels, Turkey's foreign minister voiced strong support for the Anglo-French position. But last week in the US, Ankara was strongly rebuffed by the White House over its hawkish position against Assad.

Oxfam's head of arms control, Anna Macdonald, said: "Allowing the EU arms embargo to end could have devastating consequences. There are no easy answers when trying to stop the bloodshed in Syria, but sending more arms and ammunition clearly isn't one of them.

"Transferring more weapons to Syria can only exacerbate a hellish scenario for civilians. If the UK and France are to live up to their own commitments – including those set out in the new Arms Trade Treaty — they simply must not send weapons to Syria."

The UK-French attempt to lift the arms embargo has not been made any easier by the continued lack of unity within the rebel movement. Talks failed on Sunday to end a factional dispute over proposals to dilute Qatar's influence on rebel forces, with Saudi Arabia angling to play a greater role now that Iranian-backed Hezbollah is openly fighting for Assad.

The dispute over how to respond to the civil war in Syria has exposed deep divisions in Europe. Senior European officials say much of the debate is "hypocritical" because some of the countries calling for a lifting of the embargo do not have the weapons to deliver or have no intention of taking part. They also point out that the White House and the State Department appear to be similarly split between hawks and doves.

"There is very strong opposition to a complete lifting of the embargo," said a senior official.

If the meeting agreed to a slight easing of the arms ban, it remained to be seen if it would be enough for Britain and France to accept.
Posted by seemorerocks at 12:05