Officers in balaclavas detain man near Highbury Corner, the ninth arrest in relation to murder of Drummer Lee Rigby 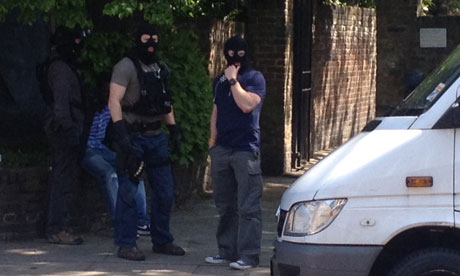 Police investigating the murder of drummer Lee Rigby made a ninth arrest on Sunday afternoon when armed officers in balaclavas seized a 22-year-old man on a north London street.

The man, who was arrested on suspicion of conspiracy to murder, was detained by detectives from the Met's counter-terrorism command and specialist firearms officers.

According to witnesses, the officers got out of a silver car and a white van to arrest the man on St Paul's Road near Highbury Corner at around 2.45pm.

Five officers stood over the man, who sat on a wall until uniformed police took him to a van and drove him away.

One witness, who did not wish to be named, said: "The guy was on a push bike when the police came out of nowhere and wrestled him to the ground." Two other plain clothes officers – identifiable only because one was wearing a Metropolitan police cap – were nearby. A Scotland Yard spokesman said: "A 22-year-old man was arrested by officers from the MPS Counter-Terrorism Command investigating the murder of Lee Rigby. He has been taken to a south London police station where he remains in custody."

The spokesman confirmed that no shots were fired.

Detectives made three arrests on Saturday detaining two men, aged 24 and 28, at an address in south-east London, while a 21-year-old man was arrested in the street in Charlton Lane, Greenwich. All three were arrested on suspicion of conspiracy to commit murder and Tasers were used on the 21-year-old and the 28-year-old. The Met said on Sunday night that the three had been released on bail to return pending further inquiries.

The two men suspected of murdering Rigby – Michael Adebolajo, 28, and Michael Adebowale, 22 – remain in custody in separate London hospitals after being shot by police on Wednesday. The Met said they "will be formally interviewed when it is possible to do so".

The Met said officers were working "tirelessly and painstakingly" to uncover the full circumstances surrounding the attack and repeated an appeal for anyone with information to come forward.

Speaking outside Scotland Yard, deputy assistant commissioner Stuart Osborne said: "We have been undertaking a complicated and often rapidly developing round-the-clock investigation since the horrific murder of fusilier Lee Rigby in Woolwich on Wednesday afternoon.

"The Metropolitan police service counter terrorism command, supported by national counter-terrorism officers and the security service, continue to work tirelessly and painstakingly to uncover the full circumstances relating to this attack.

"We are pursuing a significant amount of CCTV, social media, forensic and intelligence opportunities and have active lines of inquiry."

Osborne said that while the investigation was going well, much remained to be done and repeated appeals for information. "The public have been very supportive in relation to our appeals for help. I now ask that anyone who knew the two men who carried out this attack to consider if they have any information which may be useful to contact us in the strictest of confidence." A few hours before the latest arrest, Rigby's widow, Rebecca, visited the scene of his death with the soldier's mother and stepfather. Clutching a Peppa Pig soft toy, she pinned a balloon bearing the words "dad in a million" close to the spot where her 25-year-old husband was killed last Wednesday. The card attached read: "In memory of my wonderful husband."

One of Rigby's sisters left a bottle of his favourite HP sauce among the cards, candles and flowers, while a card written on behalf of the couple's two-year-old son read: "My Daddy, my hero. Your memory will live on in me. You made me proud and I will miss you for eternity. Love always, Jack." The soldier's mother Lyn, who held a teddy bear, and his stepfather, Ian, consoled each other as they walked along the wall of flowers, while dozens of passers-by lined the street in silence.

Lyn Rigby collapsed on to the edge of the pavement as she wept, and sat on the kerb while other family members wrapped their arms around her. Some of the group appeared too overcome with emotion and got back inside the row of cars that had taken them to the scene.

Others then crossed back to the other side of the road, which had been closed by police, where they continued to examine some of the many tributes. They put their arms around one another and hugged before all getting inside the cars just after 1pm.

The vehicles then drove off in the direction of the entrance to Woolwich barracks, just a few hundred yards up the road from the murder scene. The emotional scene was watched by hundreds of members of the public who had also gone to pay their respects to the soldier. They were held back by police while the soldier's family visited, and looked on in respectful silence during the 20 minutes they were there.