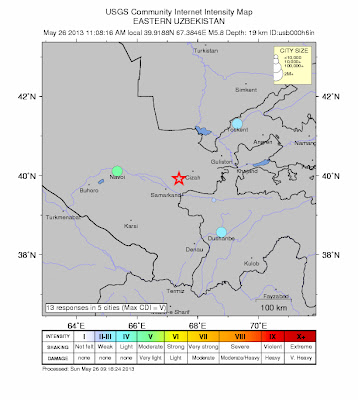 Update 16:38 UTC : According to news from Tajikistan, the quake caused small cracks in walls of buildings in Tashkent.
Update 12:07 UTC : One person from Bulungur (Uzbekistan) has just written at the EMSC site in russian language, that the shaking was very strong, all the objects fall down, there are big cracks in the walls, a lot of chimneys collapsed, windows are broken, people are afraid to return home. Bulungur is 44 km South from the EMSC epicenter. The local press is however in Sunday rest as the reports from them are very limited.
Update 09:24 UTC : We can bring you an amateur video posted on YouTube from todays earthquake as it was witnessed in Tashkent (200 km from the epicenter)

Update 08:39 UTC : Preliminary Focal Mechanism for this earthquake shows a reverse faulting (2 plates pushing upon another and breaking). No more news at this moment. We continue our search for more details.

Update 07:56 UTC : The data update is giving the following changed shaking impact on the population (the VII and VI ares can generate damage / injuries, especially on older buildings) :

Update 07:38 UTC : Samarkand reports that the cellular network went down, but no damage known as yet. This is good news, and probably means a different hypocenter and magnitude to that being calculated.
Update 07:30 UTC : Although USGS and other Uzbek newspapers are defining this quake as an intensity 5 (V) earthquake, this is not the case, as the depth and magnitude, if correct, will create at least an intensity VII, and possibly worse.
Update 07:28 UTC : In Navoy, picture frames fell, and it was felt around V (this is also 125km from the epicenter). Not good news.
Update 07:24 UTC : Using Tashkent as IV-V, it appears as though the shaking at the epicenter could be around VIII.
Update 07:18 UTC : Data arriving from our readers are telling us that there might be serious damage near the epicenter as this earthquake was well felt inTashkent and even more in Dushambe , both at 200 km distance from the epicenter
Update 07:10 UTC : A ER reader writing us from Touristic (Historic) City Samarkand (approx. 40 km to the South West) writes us :
Lots of people panicked, cellular network was down and unresponsive for about 15 mins, no damage yet known
Update 07:06 UTC : The village below is at only 2 km from the epicenter as reported by the USGS and is surely at risk for eventual damage. We have no name of it.

Lets hope for the sake of the people living in the epicenter area that USGS is right with his data and expectations.
Update 06:55 UTC : The earthquake was felt as far as Almaty
Update 06:52 UTC : The depths of the epicenter are varying seriously in between the different reporting agencies. 26 km (USGS) – 10 km (also a value as “we are not sure” by EMSC) and 16 km (Geofon)
Update 06:50 UTC : The current earthquake is (luckily) far away from yesterday’s epicenter which was close to Tashkent.
Update 06:45 UTC : We expect at least damage in the settlements around the epicenter, but as far as we get reports at the moment it is still too soon the know where  the exact epicenter is situated. At this moment we conclude away from the bigger cities
Update 06:42 UTC : Maximum shaking as expected by USGS is MMI VI = strong shaking
Update 06:37 UTC : USGS indicates far better numbers than the preliminary data from EMSC and Geofon – A Magnitude of M6.0 at a preliminary depth of 26 km.
Update 06:32 UTC : The main cities at risk are Koytash and Gallaorol.
Jyzzakh, a city with a population of 150,000 people being just out of our dangerous perimeter which we call at this moment at approx. 20 km. As there is still uncertainty about the perimeter this conclusion is still very temporary.