Earthquakes in California and UK


A magnitude-4.6 earthquake struck off the Santa Barbara coast Wednesday morning, according to the U.S. Geological Survey.

The temblor struck at 7:38 a.m. about three miles west of Isla Vista, the USGS reported. Initial reports indicated that the quake had a magnitude of 4.9, but that was later adjusted to 4.6.

The Santa Barbara County Sheriff's Department said there were no immediate reports of damage or injuries.

Dozens of people stretching from Bakersfield to Manhattan Beach reported feeling the quake on the USGS "Did you feel it?" site. Others weighed in on social media.

"That was a shaker!" @Larsonomics tweeted.

"It has definitely been a while since I was woken up by an earthquake. Thanks Santa Barbara,"@SnsetStripLocal wrote.

An earthquake on the North Wales shoreline has been felt over an area of 140km. 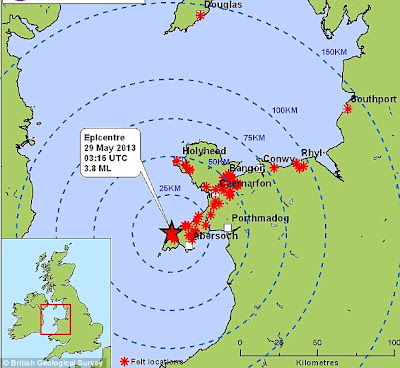 The Independent,
29 May, 2013
People were woken by the quake which happened at around 4.15am and was felt as far away as Southport in Merseyside.

The epicentre was 13km north west of the town of Abersoch, Gwynedd, on the Lleyn Peninsula and measured a magnitude of 3.8, the British Geological Survey (BGS) said.

Some 180 reports from people who felt the earthquake have been made to the BGS, who said the majority were within a 50 to 75km radius.

"An earthquake of 3.8 magnitude might occur once every 12 to 18 months.

"It was felt in the Isle of Man to the north, Southport to the north east, and the east coast of Ireland to the west."

Mr Bukits said the quake, the epicentre of which was at a depth of 8km, was not big enough to cause damage.

The epicentre was 20km south west of the 5.4 Lleyn Peninsula quake in July 1984, which did cause some minor damage.

Tom Coleman, of Talysarn, Gwynedd, told the BBC: "I was awoken at about 4.15am this morning by what sounded like a deep rumble of thunder then strong shuddering, some of the bedroom furniture rattled. It must have lasted for about half a minute. At first I thought it was just a loud clap of thunder but when the furniture started shaking I realised it must be some sort of earth tremor.

And Janet Bord, of Ruthin, Denbighshire, told the BBC: "I was woken around 4.15am by a sensation like the bed was 'rippling'. It was over very quickly and I put it down to imagination - until I heard there had been an earthquake. When I checked the time and found it had happened at 4.16, I realised that that is what I must have felt."

The Irish National Seismic Network (INSN) said tremors were felt in counties in south-east Ireland and its seismic stations in Valentia off the south-west coast, Donegal and Galway all recorded the earthquake.

Tom Blake, INSN director and from the school of cosmic physics in the Dublin Institute for Advanced Studies, said there has been a significant increase in seismic activity in the area in recent months.

"It is unlikely that the magnitude of today's earthquake will be exceeded in the Irish Sea in the coming days but aftershocks can be expected in the hours and days ahead, although many will be too weak to be felt," he said.

The BGS later reported that the earthquake had also been felt in Liverpool, Mold, Cardigan, and Wicklow, Ireland.