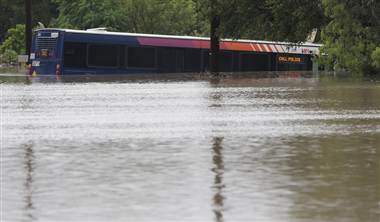 Two people are dead and more than 100 were rescued Saturday after heavy rain pummeled the Texas city, causing flash flooding.

The majority of rescues were people trapped in their vehicles in low-lying areas of the city, San Antonio Fire Department spokesman Christian Bove told NBC News.
Bove said a 29-year-old woman was trapped in her vehicle and tried to escape the rising water by climbing onto the car's roof. She was washed away, and her body was found down the road against a fence.

A woman in her mid-60s was found dead hours after her car was swept away in Leon Creek, Bove said. He said a rescue boat had just reached her car when the car rolled over, knocking the firefighters into the water. By the time they were able to get back into the boat, the car was submerged and they last sight of it, Bove said.

Bove said about 130 people had been rescued, most in vehicles. He said dozens of homes suffered flood damage and part of the roof of an apartment building collapsed.

Flooding along the San Antonio River in Bexar County outside the city forced evacuation of more than 60 people, county spokeswoman Laura Jesse said. She said at least 16 people were rescued from vehicles but there were no reports of injuries or fatalities in the county.

A small tornado touched down in the suburb of Live Oak, causing minor damage to homes, a hospital and a medical building, the National Weather Service confirmed.

Weather Channel Meteorologist Nick Wiltgen said San Antonio received 12.16 inches of rain in the 24 hours ending at 11 a.m. Central Time on Saturday. That is just shy of the 24-hour record for the city of 13.35 inches in October 1998.
Bove said the city was expecting more rain overnight.