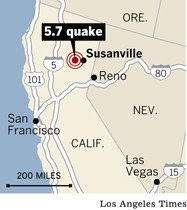 After fifty earthquakes struck Northern California in the last 24 hours, and a massive quake in eastern Russia measuring 8.2 on the Richter scale, reports are emerging that some high profile individuals on the U.S. west coast have begun evacuating their families. Unidentified international dignitaries have likewise been reportedly flown out of the San Francisco area.


The reasoning is that there may be a suspected massive “plate fracture” occurring off of the Oregon/California coast.


Something HUGE is going down….

Just had Two 5.7 earthquakes just north of Sacramento near Lassen Volcanic National Park. Don’t normally post this kind of thing just giving you a heads up…

All I can say is someone was given the word that California is about to get a big one. Moving their family out right now. They are in San Jose. Not someone who would joke around unless they knew something…

I really don’t want to freak anyone out but this is legit info… I’m sorry, just knew when this guy said something that he was worried. He was given the word to move VIPs then told to get out of Cali. Like NOW!

Key dignitaries from SanFran consulates have been flown out.