Escalation of the Syrian conflict 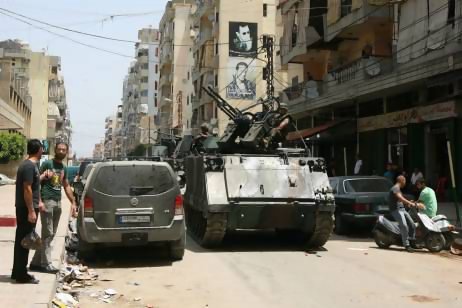 Such attacks would mark a significant escalation and spread of what is fast developing into a highly sectarian, regional war.

"It is really a question of when, not if, Hizbollah gets attacked on its home territory," said a Syrian opposition activist involved with armed rebel factions and rebel groups working out of Lebanon, made up of Syrian members.

Plans were being devised to carry out guerrilla strikes against Hizbollah in the Bekaa Valley and in the Beirut neighbourhood of Dahieh, he said.

The activist, who is part of a secretive network of rebels - not with the Syrian National Coalition or any other publicly recognised opposition faction - would not go into details about which group would be involved in any attacks.

Planning has been taking place for several weeks, he said, since before the start of the latest assault on Qusayr, a town close to the Syrian-Lebanese border.

Fighters from Hizbollah, which is armed and supported by Iran - Syria's principal ally - are playing a central role in the strategically and symbolically important battle in Qusayr, according to analysts and rebels.

Hizbollah's experienced guerrillas have helped Syrian regime troops advance into areas they have not held for more than a year, underlining the importance of their expertise in reinforcing Mr Al Assad's army.

France and Britain have said they want Hizbollah added to the EU's list of terrorist organisations over its role in Syria, and a bombing that killed five Israelis in Bulgaria last year. The US already classifies Hizbollah as a terrorist group.

"We have known for a long time about Hizbollah's involvement, it has been fighting in Homs and Damascus and if they continue to fight in our homes in Syria then it is only natural that the war will arrive at their homes too," the activist said.
No precise timeline for any attacks had yet been set, he said.

"It depends on the circumstances: if Hizbollah pull out now then maybe it will not happen, otherwise when things are in place and the opportunity is there, the attacks will happen," he said.

This week at least 18 people have been killed and more than 170 wounded in Lebanon during an outbreak of fighting in Tripoli between Sunni supporters of the Syrian rebels and Shiite supporters of Mr Al Assad.

Syria's ruling elite, including the Assad family that has ruled the country for more than four decades, is dominated by Alawites, a Shiite sect, while Syria's majority Sunni Muslims are playing an increasingly dominant role in the uprising against the regime.

In Lebanon, the Alawite enclave of Jabal Mohesin and the neighbourhing Sunni area of Al Qobba in Tripoli have long been flashpoints for sectarian violence.

Lebanese Alawites from the Arab Democratic Party have said Sunni Islamist militants from Jabhat Al Nusra, a group linked to Al Qaeda, prominent in the insurgency against Mr Al Assad, are leading the fighting in Tripoli.

Plans by Syrian rebels to assault Hizbollah strongholds would open a new front, particularly if they were to take place in zones where the Shiite militant group has faced no real challengers.

The Syrian Observatory for Human Rights, a UK-based organisation monitoring the death toll in Syria, said it believed 104 Hizbollah fighters had been killed in Syria since last autumn.

Hizbollah does not openly report on its casualties. However, the Agence France-Presse cited a source close to the group as saying 75 fighters had been killed.

Funeral announcements posted by Hizbollah online and in sympathetic media outlets suggest dozens of the group's fighters, including some prominent commanders, have been killed in the battle for Qusayr, although Hizbollah says the dead were killed "doing their jihadist duty" without specifying where.

The Syrian opposition activist, who spoke on condition of anonymity, did not rule out the possibility of Syrian rebels clashing with the Lebanese army if it tried to intervene in attacks on Hizbollah.

Lebanese government forces, outgunned by Hizbollah and hamstrung by a paralysed and deeply sectarian political system, have a limited ability to stop militants fighting.

Another Syrian opposition figure based in Lebanon, involved with supplying weapons to anti-Assad rebels in Syria, said Sunni hardliners had been pushing to take the war with Hizbollah into Lebanon for months, in response to the Shiite group's growing direct support for the Syrian regime.

"We have been holding them [Islamist rebels] back as best we can and advising them that it is not the right thing to do but our argument looks weaker and weaker all the time," he said.

"In the end Al Nusra and these groups will want to attack Hizbollah in Lebanon and there won't be anything we can do about it," he said.

Some Syrian opposition activists fear that fighting Hizbollah on its home front would only fuel support for the group among Lebanese Shiites, convincing them they are under sectarian attack by Sunni extremists. Media reports suggest there is concern among Lebanon's Shiite community over Hizbollah's involvement in Syria.

"This is a danger but Hizbollah is already involved in Syria and they will only realise what the true consequences are when they are hit in their homes as we are hit in ours," said the activist involved in the secretive Syrian rebel group.

On Monday an obscure Syrian opposition group's Facebook page posted a notice claiming that a 300-strong Islamist rebel group was preparing military operations against Hizbollah inside Lebanon "in response to the crimes it committed against people in Syrian cities".

The notice said Syrian "jihadists" commanded by Abu Abdullah Al Hashemi were inside Hizbollah's southern suburbs waiting for orders to begin attacks, and blamed the Syrian regime and its supporters for turning the uprising into a "sectarian war".

More than 94,000 people have been killed since the Syrian uprising began in March 2011, according to the Observatory. It started as a peaceful political uprising, but morphed into a violent revolution after thousands of unarmed demonstrators were shot and killed by Syrian security forces trying to suppress demands for reform.

It has increasingly taken on a sectarian tone, pitting Shiites against Sunnis, although many opposition groups have sought to work against that narrative.
The war has also begun to spread, with sectarian or Syrian-linked violence on the rise in neighbouring Lebanon, Turkey and Iraq. Middle East and international powers, among them the US and Russia, are also increasingly involved in the Syrian conflict.

Hizbollah - the names means "party of God" - was widely respected in the Middle East after its 2006 war with Israel, earning a reputation as the only organisation in the region capable of standing up to the Jewish state.

It always insisted it was first and foremost a force for defending Lebanon, and fighting for Arab rights, not a sectarian group, despite the fact it would only accept Shiites as members.

That wide popularity has now evaporated, with Sunnis sympathetic to the uprising in Syria calling Hizbollah "the devil's party".

Though they officially won’t even acknowledge that the strikes took place, recent Israeli attacks on Syria have been done with hushed tones surrounding the prospect of Hezbollah acquiring hugely powerful offensive weapons from the Assad government’s arsenal, and chemical weapons are usually at least implicitly included in the fretting.

The reality is much different, however, and reports that the targeted weapons supposedly ear-marked for Hezbollah were anti-aircraft and defensive weapons don’t make sense in the context of Israel’s official statements on the matter. Yet analysts say that defensive weapons very much are the target, and it stems fromIsrael’s constant expectations of an imminent region-wide war.

Though Israel hasn’t fought a major regional war since 1967, their political leadership is always playing to fears of the entire Arab world united in an effort to drive them into the sea. The reality is that Israeli military leadership has been taught to expect major attacks, and in this case it spans the Shi’ite world, with an assumption that they will be fighting a multi-front war with Hezbollah, the Assad government in Syria, and Iran all at the same time.

It is in this context that Israel is constantly talking up its “military superiority” needs, andexpecting the US to pony up aid to maintain. Not merely defensive superiority against any single opponent in the region, but overwhelming superiority over the entire region at once.

That’s why Hezbollah acquiring defensive weapons is a big problem from Israel’s perspective, not only because Israeli military officials envision a token invasion of southern Lebanon every few years, but because if Hezbollah becomes less convenient to attack, the rest of their prospective enemies become harder in the bargain. For Israel, a Hezbollah armed with anti-ship weapons means Israel can’t part its Navy off the Lebanese coast and just shell away at their cities with impunity, and a Hezbollah with decent anti-aircraft weapons means Israel can’t constantly have warplanes violating Lebanese airspace, which they do even in peacetime.

Indeed the old WMD canard isn’t really at play here, except as a rhetorical tool. Former Israeli military intelligence chief Amos Yadlin dismissed the threat posed by chemical weapons, saying Hezbollah would be even less likely to try to use them than Syria, and that they are simply too difficult to use to be operationally practical.