Flooding grips Norway
Flooding has forced hundreds of people to evacuate from their homes in eastern Norway. 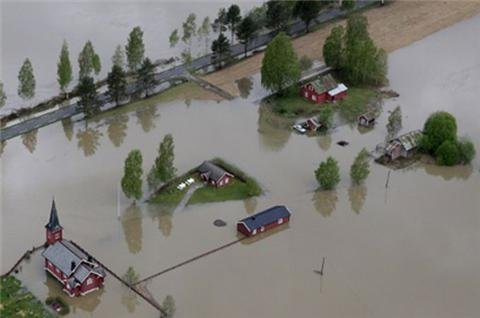 
The weather has been unsettled across the region over recent weeks, and in just the last couple of days the rain has turned very heavy. Lillehammer reported 64mm of rain on Wednesday, which is more than is expected in the entire month.
Melting snow has also added to the problems.

On 18 and 19 May, the temperatures in Lillehammer soared to 29C. In the surrounding mountains, this sudden rise in temperature caused the snow to suddenly melt.

As the water poured down the mountainside, some of the rivers burst their banks.
One of the worst hit towns was Kvam, which is situated along the Gudbrandsdalslagen River.

Diggers were being used to try and alter the path of the flood water, but work had to be abandoned because the conditions became too hazardous. 250 people had to be evacuated from the town.

Jens Stoltenberg, Norwegian prime minister, visited the town on Thursday to inspect the damage for himself.

The flooding and landslides forced dozens of roads and two major railway lines to shut, but fortunately there have been no reported injuries.