The illusion of a functioning economy

Is anyone familiar with Potemkin villages? 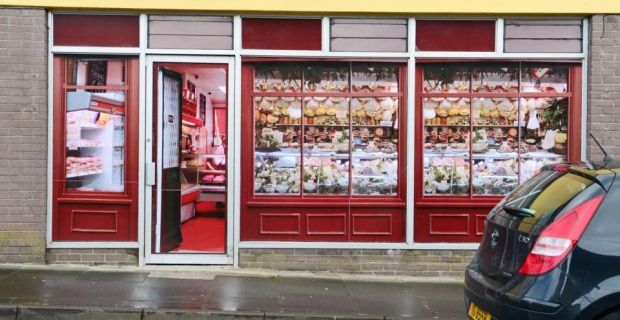 Stickers applied to the windows of a former butcher’s shop in Belcoo, Co Fermanagh, give the premises the superficial appearance of a thriving business. Photograph: Bryan O’Brien

Hundreds of thousands of pounds have been spent on a Fermanagh facelift as the county prepares for the G8 summit in just under three weeks’ time, but locals complain the work paid for by the local council and the Stormont Executive is little more than skin deep.

More than 100 properties within range of the sumptuous Lough Erne resort which hosts the world’s wealthiest leaders, have been tidied up, painted or power-hosed.

However, locals say the makeover only serves to hide a deeper malaise which US president Barack Obama, German chancellor Angela Merkel, French president François Hollande and others will not get to see.

Two shops in Belcoo, right on the border with Blacklion, Co Cavan, have been painted over to appear as thriving businesses. The reality, as in other parts of the county, is rather more stark.

Just a few weeks ago, Flanagan’s – a former butcher’s and vegetable shop in the neat village – was cleaned and repainted with bespoke images of a thriving business placed in the windows. Any G8 delegate passing on the way to discuss global capitalism would easily be fooled into thinking that all is well with the free-market system in Fermanagh. But, the facts are different.

Jim Sheridan, director of Belcoo Enterprises Limited, welcomes any attempt to tidy the area but laments the wrecking effects recession and the demise of the Celtic Tiger have had locally.

“That work happened just a few weeks ago,” he said. “The council got that place painted but it went under sometime last year. A lot of people round here worked in construction and that work has gone now.”
Picture business

Elsewhere in Fermanagh, billboard-sized pictures of the gorgeous scenery have been located to mask the occasional stark and abandoned building site or other eyesore.

All is paid for by so-called dereliction funding. About £300,000 was made available by the Department of the Environment and the Department for Social Development. A second round of funding is expected. Late last year the council wrote to the owners of properties in need of a facelift seeking permission for the work. The scheme was put together with the greatest haste to make sure the properties, mostly in Enniskillen itself, were authorised for improvements.
Council chief executive Brendan Hegarty said at the time the initiative was “a phenomenal opportunity”.

“We want to present the county as best as we can and promote it in terms of industry and tourism,” he said.
Spruce-up

The short-term beneficiaries were local builders and painters who were called in for the spruce-up. Even Enniskillen’s Clinton Centre, opened by the former US president on the site of the IRA Poppy Day bombing, has been given a cream makeover.

For one local Assembly member, the cash injection is welcome but is no substitute for the investment the area needs.

“I’ve no problem with that, but some people are putting out the idea that there’s no such a thing as a closed-down business in Fermanagh . . . It’s a huge lie and a false economy.”