Is Australia the Face of Climate Change to Come?
Extreme weather Down Under may foreshadow events on a global scale 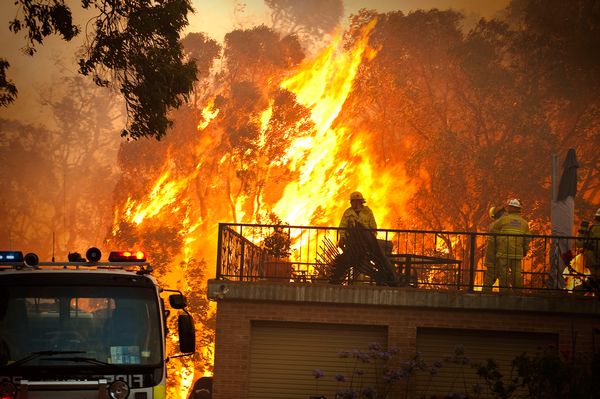 
In early 2012  once-in-a-century floods submerged swaths of Great Britain and Ireland, causing some $1.52 billion in damages. Then in June record-high temperatures in Russia sparked wildfires that consumed 74 million acres of pristine Siberian taiga. Months after that, Hurricane Sandy pummeled seven countries, killing hundreds and running up an estimated $75 billion in damages. Just this week, a tornado of virtually unheard of size and ferocity tore through a small city in Oklahoma, leaving 24 people dead.


Each of these one-off traumas was bad enough, wreaking havoc, but in Australia such events seem to be becoming commonplace.

The Lucky Country has experienced a major spike in extreme weather in the past few years, with a string of devastating incidents just since January.

That has people wondering if the island continent is somehow a perfect bellwether for the Earth's changing climate. So scientists are bearing down on the problem with intensity, investigating Australia's increasingly violent weather patterns and trying to figure out what they might portend for the rest of the world as our climate changes.

So Hot Even the Summer Got Angry

The rough-hewn sandstone buildings perched atop Observatory Hill have been keeping an eye on Sydney Harbor since 1858. They've pretty much seen it all—from the installation of the city's first gaslights to the construction of the now iconic Sydney Opera House and Harbor Bridge.

Much of the continent was languishing in the grip of a heat wave that would break 123 heat and flood-related records in 90 days—among them, the hottest summer on record and the hottest seven consecutive days ever recorded.

At the time these statistical dramas, and their possible significance, paled against the imperative of not self-combusting on your walk from office to car.

At the Pink Roadhouse in the outback town of Oodnadatta—whose locals are legendary for the stoicism with which they have long dealt with living in Australia's hottest town—temperatures pushed so high that gasoline vaporized before it even made it into the fuel tank.

"The ground, the building, everything is so hot, you walk outside and you feel it's going to burn you," Lynnie Plate, the exhausted owner of the establishment, told a reporter at the time.

Australians love their summer heat. They take particular joy in mocking British tourists for the magenta hue they often acquire after even a mild day at the beach.

Because winter and summer temperature variations aren't all that great in much of Australia, Aussies, unlike the Brits, are habitually accustomed to heat that might melt lesser mortals.

The anomaly stood out. Numbers like those break through what climate scientists like David Jones, manager of climate monitoring prediction at theAustralian Bureau of Meteorology, call the "signal to noise" ratio.

"One of the first places on the planet where the global warming signal is easy to discern is actually Australia, because of this low temperature variability," Jones said. "And that's exactly what we're seeing. The Australian warming trend is very clearly apparent in our records. It pops out quite quickly from the background noise of weather patterns."

But just what does that breaking through the noise tell us? Apparently, it says not to expect things to calm down any time soon.

On January 26, before the heat wave was even over, the second round of devastating flooding since 2011 was battering Queensland.

The remnants of Tropical Cyclone Oswald lashed the country's east coast, killing six people and costing about $2.5 billion in damages. Military helicopters were sent into the city of Bundaberg to evacuate stranded residents as the streets churned with water, debris, and sewage.

A wallaby stands on a hay bail, trapped by rising flood waters in Queesland. Photograph by Anthony Skerman, AP Photo
It could have been worse—in 2011 similar floods killed more than 30 people and chalked up a $2.4 billion tab.

Tropical cyclones have always been a reality of life here, but the sheer intensity of these storms shocked the country.

Once upon a time, once-in-a-century flooding meant just that, but these days the term seems to be shorthand for a really bad flood.

Climate scientists have long been reluctant to link individual extreme weather events to climate change—something that's impossible to do with any scientific rigor.

They've also been loath to speak in the aggregate about a connection. That reluctance, however, is starting to disappear.

In early March the Australian government's climate change watchdog, the Climate Commission, released a bombshell of a report called "The Angry Summer."

Will Steffen, executive director of the Australian National University Climate Change Institute and the report's author, reckoned that there was a one-in-five-hundred chance that natural variation had caused the recent extreme events.

Although Steffen still isn't willing to say that individual weather occurrences are the result of climate change, he suggests that collectively they do demonstrate a rapidly changing climate.

He believes Australia is a unique environment in which to watch the change because it is already such a naturally extreme place.

"We have such a range of different types of extreme events and climatic patterns that affect people," Steffen said. "Examples being obviously sea-level rise, because we're a coastal country; high-temperature events; bush fires; droughts and floods all at the same time.

"So you've got the basket of the worst types of extreme weather events all being fairly prominent in Australia."

The blistering 2013 heat wave started out in the parched, largely empty, red center of the continent and spread to the east coast.

Roughly 80 percent of Australians live within 30 miles of the coast, which means that all its major population centers are susceptible to sea-level rise, powerful storms, and flooding.

A man rescues a friend’s surfboard from a flooded home in Newmarket, a suburb of Brisbane. Photograph by Patrick Hamilton, AFP Photo
If the death tolls we've already seen from the 2011 and 2013 floods are any indication of things to come, there will be no shortage of suffering as sea levels creep ever higher and megastorms batter the populated coastlines.

"We seem to be on the firing line for a lot of this stuff," Steffen said. "I think in terms of what actually matters for people and infrastructure, we could be the canary in the coal mine."

This is the main reason so much scientific brainpower in research institutes across Australia is being directed at studying weather and climate there, with massive funding support from the federal government.

The Future Could Be Grim

If Australia's average temperatures rise by 0.6 to 1.5°C by 2030, and then by 1.0 to  5.0°C by 2070, as predicted by the Commonwealth Scientific and Industrial Research Organization (CSIRO), extreme weather events may become the norm.

To Steffen, the lineup reads like a shopping list for an Australian apocalypse: blistering heat waves spanning the entire continent, less rainfall and more droughts in the south and southwest, uncertain rainfall in the north, less snow, many more fires, more storms with heavy rainfall, and more frequent and intense cyclones.

"The one-in-a-hundred-year flooding event is going to happen every year, or even a bit more often," Steffen said.

In the next ten years, it warns, Australians should expect more heat, bush fires, rainfall, droughts, and sea-level rise.

It's hard to think of another country on Earth that has to deal with such a range of extreme weather events.

Even the United States, the place that scientists say is most comparable to Australia, has the twin saving graces of having neither a vast interior desert to trap heat nor ocean waters all around it to intensify the impact of rising seas and superpowered storms on population centers.

Unfortunately for Australians, the Climate Commission fully expects to have a decade of extreme weather events to study on their behalf. "Stabilizing the climate," the commissioners wrote, "is like turning around a battleship—it cannot be done immediately given its momentum.

"When danger is ahead you must start turning the wheel now. Any delay means that it is more and more difficult to avert the future danger."