Another major earthquake on New Madrid is inevitable, geologists say it’s only a matter of time
By Michael Fitzgerald CNH 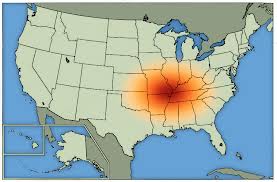 It’s a bleak scenario. A massive earthquake along the New Madrid fault kills or injures 60,000 people in Tennessee. A quarter of a million people are homeless. The Memphis airport — the country’s biggest air terminal for packages — goes off-line. Major oil and gas pipelines across Tennessee rupture, causing shortages in the Northeast. In Missouri, another 15,000 people are hurt or dead. Cities and towns throughout the central U.S. lose power and water for months. Losses stack up to hundreds of billions of dollars.

Fortunately, this magnitude 7.7 temblor is not real but rather a scenario imagined by the Mid-America Earthquake Center and the Institute for Crisis, Disaster and Risk Management at George Washington University. The goal of their 2008 analysis was to plan for a modern recurrence of quakes that happened along the New Madrid fault more than 200 years ago, in 1811 and 1812.

No one alive has experienced a major earthquake in the Midwest, yet geologists say it’s only a matter of time. That puts a lot of uncertainty on disaster officials. Their earthquake precautions — quake-resistant building codes, for example — have never been reality tested. Some question if enough has been done to strengthen existing buildings, schools and other infrastructure. It is difficult to prepare for a geological catastrophe the public cannot see and has never experienced.

“We mostly react to disasters, and it’s been extremely rare that we get ahead of things,” said Claire Rubin, a disaster response specialist in Arlington, Va. “A lot of hard problems don’t get solved. They get moved around and passed along.”

Steven L. Lueker is among disaster response officials who worry about the New Madrid fault and another fault to the north, in the Wabash Valley. He’s the emergency management coordinator for Jefferson County in Southern Illinois, and he rattles off likely impact statistics. One of the most important: The New Madrid fault is expected to generate a large-scale earthquake within the next 50 years. 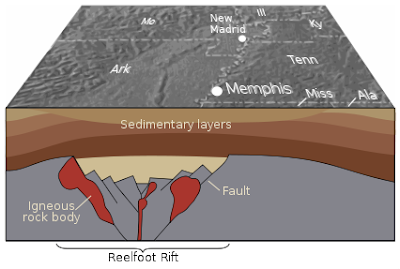 “I may not be here when it happens,” said Lueker. “Or it may happen while we’re talking. You don’t know.

”  When it does happen, Lueker said Mount Vernon, the Jefferson County seat, likely will be a staging area for support flowing into Tennessee and Missouri — unless the Mount Vernon airport itself is too damaged. He doesn’t — can’t — know.

Uncertainty is the maddening aspect of earthquakes. They can’t be predicted, even very big ones. We know they happen frequently along the Earth’s tectonic plates. We also know there are no such plates in the central United States, yet that part of the country has had major earthquakes in three zones: the New Madrid fault, which on computer models looks like Harry Potter’s scar slashing across Arkansas, Missouri and Tennessee; the Wabash Valley fault in Illinois and Indiana; and the East Tennessee Seismic Zone that runs into Alabama.

These are not like the faults in California, which last had a major earthquake in 1994, when the magnitude 6.7 Northridge temblor killed 57 people and caused $20 billion in damages. The mid-continent faults rupture less often; New Madrid gets the shakes maybe 200 times a year, about a tenth the number in California. And earthquakes in the central United States tend to be smaller. The New Madrid fault appears to have a big rupture every 300 years or so; the Wabash Valley has one perhaps every 500 years.

But when quakes do hit the central United States, geology means they are felt much farther away, because the Earth’s crust in the region does not absorb the shock waves in the way it does in the Western United States. “The Northridge earthquake was barely felt in Las Vegas, 250 miles away,” said Gary Patterson, director of education and outreach at the Center for Earthquake Research and Information at the University of Memphis. “Here, a large quake would be felt 1,200 miles away in Canada.

”  Not everyone thinks the New Madrid fault will produce another big earthquake. Seth Stein, a geologist at Northwestern University, has argued that the small quakes occurring along the fault are not the kind that suggest the Earth is gathering energy for a large one.

“He’s a smart guy,” said Patterson. “But it’s interesting that you have to go 500 miles away from the fault to find a scientist who disagrees with the consensus” that another New Madrid quake is inevitable.

At the same time, Patterson and others concede it is difficult to explain why the faults in the central United States are active at all.

Disaster preparedness officials — encouraged by the federal and state governments — are getting ready for a large quake anyway. The Federal Emergency Management Agency (FEMA) sponsors events like the Great Shake-Out and Earthquakes Mean Business, instructing communities and businesses the protective mantra of “Drop, Cover and Hold On.”  Disaster officials also collaborate on regional drills. The Mid-America Earthquake Center’s 2008 scenario is one example. Another is the Central United States Earthquake Consortium, a planning agency that represents eight states, which is scheduling a large-scale exercise next year.

Earthquake preparedness is not always widely embraced, however, at least as a matter of policy. Developers in Memphis and Shelby County, Tenn., for example, are engaged in a protracted debate over whether to update the local building code to require tougher material standards such as framing clips that help secure a house’s frame to its foundation. Engineers say the costs of including this hardware in homes would be minimal. The developers think otherwise.

What’s not in dispute is that the region’s building codes are untested. Almost every state that would be affected by a quake on the New Madrid fault has a building code. But building codes have only been earthquake-oriented for 20 years or so. And there hasn’t been a magnitude 6 or greater earthquake in the area since 1895, when a 6.7 hit in Charleston, Mo.

Even people uninitiated in earthquakes are somewhat prepared, according to FEMA, based on experience with other disasters including tornadoes, hurricanes, floods and wildfires.

That may be true, but earthquakes present their own complications, said Amr S. Elnashai, outgoing director of the Mid-America Earthquake Center at the University of Illinois. Earthquakes have aftershocks and cause landslides, for example.

For all its planning, said Elnashai, “the Midwest is more aware but it is not better prepared.” There has not been much work to improve and retrofit pipelines, most buildings, or critical facilities like schools, banks and chemical plants.

The region is also unprepared for the politics of response. A large-scale New Madrid earthquake could devastate portions of Alabama, Arkansas, Illinois, Indiana, Kentucky, Missouri, Mississippi and Tennessee. These states are members of the consortium that is preparing for a major disaster in the Midwest.

The clear problem will be allocating resources. Would Memphis and St. Louis get most of the attention after a major earthquake, while small towns and vast rural areas are just as badly affected?  “

For a small community like Marion, Ill., versus a Bloomington, Ind., versus a Paducah, Ky., who gets those resources? Who makes the decision?” said James M. Wilkinson Jr., the consortium’s executive director. The consortium has started to address those questions.

In the end, preparedness only gets us so far, said Lueker, the emergency management director in Jefferson County, Ill. He noted what happened in 2011 on the northeast coast of earthquake-prone Japan, where some who heard sirens going off after a magnitude 9.0 quake still stood and watched an approaching tsunami.

“They’re the best-trained people in the world, and they still died,” he said. “As well trained as those people are, it makes me wonder how well we can be prepared.”