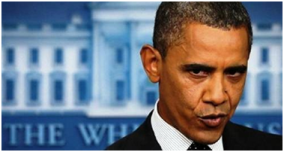 His doublespeak duplicity reflects the last refuge of a scoundrel. He’s the worst in recent memory. Perhaps the worst ever. Forked tongue rhetoric can’t disguise it.
Throughout his tenure, he governed lawlessly. He’s done so at home and abroad. He spurns rule of law principles and other democratic values.

Nothing suggests change. Business as usual continues. War on humanity is policy. Rogue leaders govern that way. Obama threatens everyone.

On May 23, he spoke at Washington’s National Defense University. He defended what he urged changing four years earlier. More on his Thursday address below.

On May 21, 2009, he spoke at the National Archives. He addressed national security. He said America can’t be safe “unless we enlist the power of our most fundamental values.”

“The documents that we hold in this very hall – the Declaration of Independence, the Constitution, the Bill of Rights – these are not simply words written into aging parchment.”

“They are the foundation of liberty and justice in this country, and a light that shines for all who seek freedom, fairness, equality, and dignity around the world.”
“(O)ur government made a series of hasty decisions.”

“(W)e set (aside fundamental) principles as luxuries that we could no longer afford.”

“In other words, we went off course. (Americans) called for a new approach – one that rejected torture and one that recognized the imperative of closing the prison at Guantanamo Bay.”

We must act, he said, “with an abiding confidence in the rule of law and due process; in checks and balances and accountability.”

“(D)ecisions that were made over the last eight years established an ad hoc legal approach.”

He called doing so “neither effective nor sustainable.”

He pledged change. He said he took steps to prohibit torture. He ordered Guantanamo closed, he claimed.

He made other high-minded promises. He “swore an oath to uphold the Constitution,” he said. He systematically spurned it. He did so across the board. He represents the worst of rogue leadership.

His Thursday address reflected same old, same old. It was beginning-to-end demagogic boilerplate. We’ve heard it throughout his tenure. He repeats it ad nauseam.

She interrupted his speech. She did so several times. She called on him to close Guantanamo, release cleared detainees, and stop killer drone attacks.

“Will you apologize for the thousands of Muslims that you killed,” she asked? “Will you compensate the families of innocent victims?”

“Can you tell the Muslims that their lives are as precious as our lives?”

“Can you take the drones out of the hands of the CIA?”

“Can you stop (drone) strikes that are killing people on the basis of suspicious activity?”

“You are commander in chief! You can close Guantanamo today! You can release” all cleared detainees.

“It’s been 11 years. Abide by the rule of law. You’re a constitutional lawyer.”

Speaking truth to power has a price. Benjamin was forcibly removed. She was detained. She was interrogated by Secret Service, military and FBI personnel. She was then released.

Asked why she challenged Obama, she said:

“We have been so disappointed with Obama. We expected him to to make serious changes like taking drones out of the hands of the CIA, stopping the signature strikes, apologizing to innocents who have been killed, families of the innocent, and announcing that he, as Commander-in-Chief, would close Guantanamo, so when he did not I felt compelled to speak out.”

Obama defended drone strikes. He did so disingenuously. Extrajudicial killing is lawless. Weasel words fell short of explaining his failure to close Guantanamo. What he said didn’t wash.

He lied. He blamed Congress for his own transgression. He bears full responsibility. He can close Guantanamo today. He can do so with a stroke of his pen.

As president and commander in chief, he’s fully authorized to do so. Congress has no say. He can order all uncharged prisoners released. Indefinite detention is lawless.

He claimed a nonexistent terror threat. The only ones are those he and complicit allies invent. They’ve done so throughout his tenure. They continued what Bush officials began.

In 2009, Obama promised change. He spurned what he pledged to uphold. He did what core supporters thought impossible. He exceeded the worst of his predecessor.

He turned truth on its head. He claimed extrajudicial murder is legal. On 9/11, America was attacked, he said. Doing so was state-sponsored terrorism. Bin Laden and Al Qaeda were wrongfully blamed.

Days later Authorization for Use of Military Force (AUMF) was introduced. Congress passed it near unanimously. Bush signed it into law. America’s “war on terror” began.

Rule of law principles don’t matter. Diktat authority is policy. Obama’s weasel words belie his actions. His promises aren’t worth the paper they’re written on. He broke every major one made.

Nothing ahead suggests change. Straightaway in office he promised Guantanamo closure. Nothing whatever’s been done to do so.

Drone killing is prioritized. More of the same is planned. No one’s secure anywhere. US citizens are vulnerable. Summary judgment is policy. Attacks can occur anywhere. US soil is unsafe. There’s no place to hide.

Obama reflects the worst of rogue leadership. War on terror policy continues. It does so when no threat exists. It’s lawless and unconscionable.

Following his address, the Center for Constitutional Rights responded as follows:
“(U)nless (Obama) takes immediate steps to resume transfers and ultimately close (Guantanamo), his administration will not escape the ‘harsh judgment’ of history.”

Lifting the ban on Yemeni transfers fell short. So far it’s rhetoric, not policy. “(W)e are disappointed by (Obama’s) comment that cleared men will only be released ‘to the greatest extent possible.’ “

Obama’s “equivocation is troubling. After eleven years of detention without charge or trial, all of the men President Obama does not intend to give fair trials should be released and reunited with their families.”

“Anything short of that threatens to worsen a potentially deadly crisis unfolding at Guantanamo.”

“Whether or not the United States can use lethal force under the laws of war is not a matter of policy preference – it is a matter of law and facts.

Continuing current policy in any forms “sets a dangerous precedent for future administrations and other countries.”

Hundreds of activists endorsed a New York Times ad. It called on Obama to “Close Guantanamo Now” and “stop the torture.”

“Presidents cannot be allowed to arrogate to themselves the power of judge, jury and executioner.”

“Fundamental civil liberties have been eviscerated.”

“It is up to the people to stand up for principle and morality when their institutions and public officials refuse to do so.”

“End the War Crimes and Violations of Fundamental Rights!”

New world order harshness threatens everyone. It’s a clear and present danger. It’s much too great to ignore.

Stephen Lendman- BFP Contributing Author & Analyst
Stephen Lendman was born in 1934 in Boston, MA. He received a Harvard BA in 1956 and a Wharton MBA in 1960. Since 2005, Mr. Lendman has been writing on vital world and national topics, including war and peace, American imperialism, corporate dominance, political persecutions, and a range of other social, economic and political issues. He hosts The Progressive Radio News Hour on The Progressive Radio Network. Visit Mr. Lendman’s blog site here. He can be reached atlendmanstephen@sbcglobal.net