US orders the seizure of Iranian tanker released by Gibraltar


US unseals warrant to seize

The US has ordered the seizure of newly-freed Iranian oil tanker Grace 1, charging the ship with illegally using the US financial system to sell oil to Syria to support the IRGC after Gibraltar released the vessel.
The Justice Department has unsealed a warrant ordering the seizure and forfeiture of the Iranian tanker, all of the oil it is carrying, and $995,000, claiming the Iranians illegally used the US banking system to finance the shipment of oil to Syria to support the IRGC, which the US designated a terror group earlier this year as Washington’s “maximum pressure” campaign against Tehran ramped up.
Accusing the ship of violations of bank fraud and money laundering laws, the International Emergency Economic Powers Act, and terrorism statutes, the US complaint alleges “multiple parties affiliated with the IRGC” used voyages like that of Grace 1 to support illegal activities and claims “a network of front companies” laundered millions of dollars through these shipments.
Gibraltar released the Iranian tanker after claiming to receive a written assurance from her captain that the vessel was not bound for Syria as the UK Royal Marines who seized it last month had alleged, though Iran has denied providing such an assurance. Despite multiple formal US requests and attempts to hold up the departure in court - which Iran’s ambassador to the UK called “desperate, last-minute efforts” - Grace 1 was finally permitted to leave the UK territory.
The ship has been renamed “Adrian Darya” and fitted with an Iranian flag for its onward journey at its owner’s request, according to Iranian state media. Meanwhile, the US has warned of “serious consequences” for its crew - though those consequences appear to be limited to barring them from travel to the US.
Gibraltar lifted the detention order for the vessel on Thursday, affirming in a statement that there are “no longer any reasonable grounds for the continued legal detention of the Grace 1 in order to ensure compliance with the EU Sanctions Regulation.” 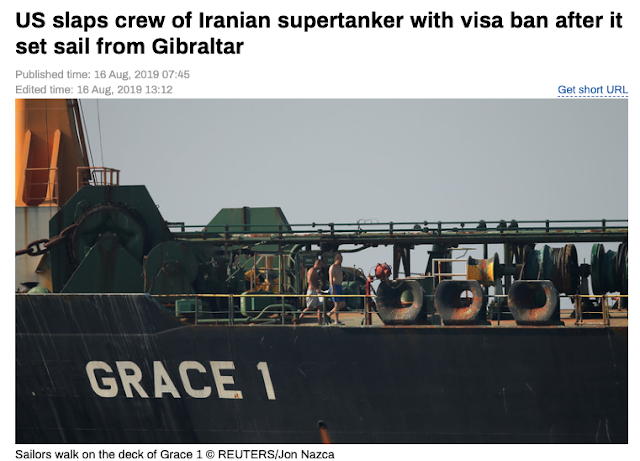