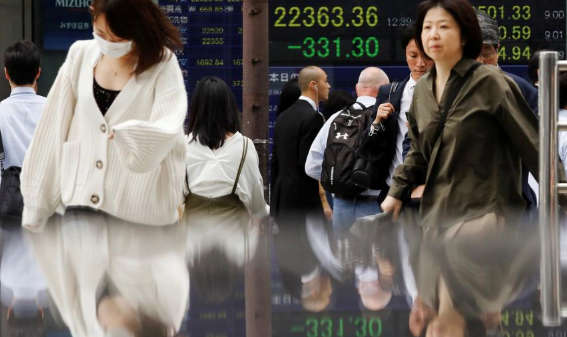 
SYDNEY (Reuters) - Asian shares sank on Monday as the latest salvo in the Sino-U.S. trade war shook confidence in the world economy and sent investors steaming to the safe harbors of sovereign bonds and gold, while slugging emerging market currencies.

People walk past an electronic board showing Japan's Nikkei average outside a brokerage in Tokyo, Japan, October 15, 2018. REUTERS/Toru Hanai
Yields on benchmark 10-year Treasury debt dropped to their lowest since mid-2016, while gold hit its highest since April 2013 as risk was shunned.

There was some relief that China fixed the yuan’s midpoint at a relatively steady 7.0570 per dollar when it had been trading as weak as 7.1850 offshore, countering concerns Beijing would let the currency slide to keep exports competitive.

At the G7 meeting in France over the weekend, Trump caused some confusion by indicating he may have had second thoughts on the tariffs.

But the White House said on Sunday that Trump wished he had raised tariffs on Chinese goods even higher last week, even as he signaled he did not plan to follow through with a demand that U.S. firms close operations in China.

“There is an uneasy feeling that the very fragile negotiations are spiraling out of control,” wrote analysts at ANZ in a note.

“The escalation suggests uncertainty will continue to weigh on global trade, industrial production and investment, with no sign of a resolution.”

The latest broadside overshadowed a pledge by Federal Reserve Chair Jerome Powell to “act as appropriate” to keep the U.S. economy healthy, although he stopped short of committing to rapid-fire rate cuts.

The markets clearly believe, however, the Fed will have to act aggressively and are fully priced for at least a quarter-point cut in September and more than 110 basis points of easing by the end of 2020.

“Central banks can’t fully ameliorate the downside of a global trade war,” he added. “Companies will enter lockdown mode in terms of spending, and eventually hiring, until at least the November 2020 election amid all the uncertainty.”

A woman counts Japanese 10,000 yen notes in Tokyo, in this February 28, 2013 picture illustration. REUTERS/Shohei Miyano/Illustration/File Photo
YIELDS RACE LOWER
Yields on 10-year Treasury notes were down at 1.48%, having dived from a top of 1.66% on Friday, leaving them almost matching two-year yields.

“We continue to remain long 10’s, targeting 1.3% due to a combination of weakness in the global economy and trade war uncertainty filtering through into a weaker U.S. economy,” said Priya Misra, head of global rates strategy at TD Securities.

“This will force the Fed to ease beyond a ‘mid-cycle adjustment to policy’,” he added. “We believe that the market is underpricing the risks of additional rate cuts in 2020.”

The drop in yields initially swept the legs out from under the dollar, which slid 0.5% on Friday against a basket of currencies and was last trading at 97.654.

It took an early hit on the yen to touch 104.47, but pared the losses as the session wore on and was last at 105.21. The next major chart point is a low around 104.10 briefly touched during the “flash-crash” of early January.

The euro was firm at $1.1143, having climbed 0.6% on Friday, although restrained somewhat by speculation the European Central Bank will also have to ease aggressively next month.

The dollar fared better elsewhere, making inroads on most emerging market currencies. The Turkish lira briefly tumbled as far as 6.4700 per dollar at one stage.

Oil prices went the other way on worries the tariffs dispute would crimp world demand. [O/R] 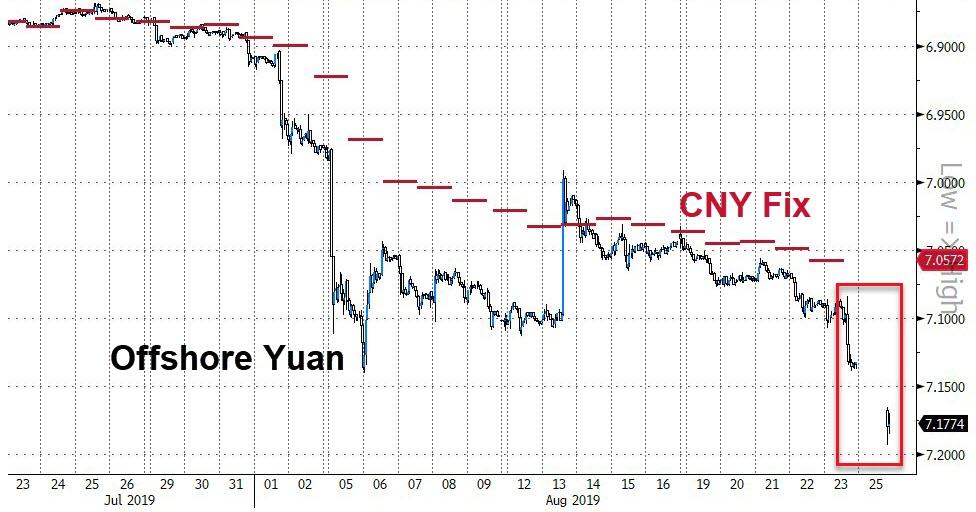 Pressuring the weaker end of the Yuan peg band... 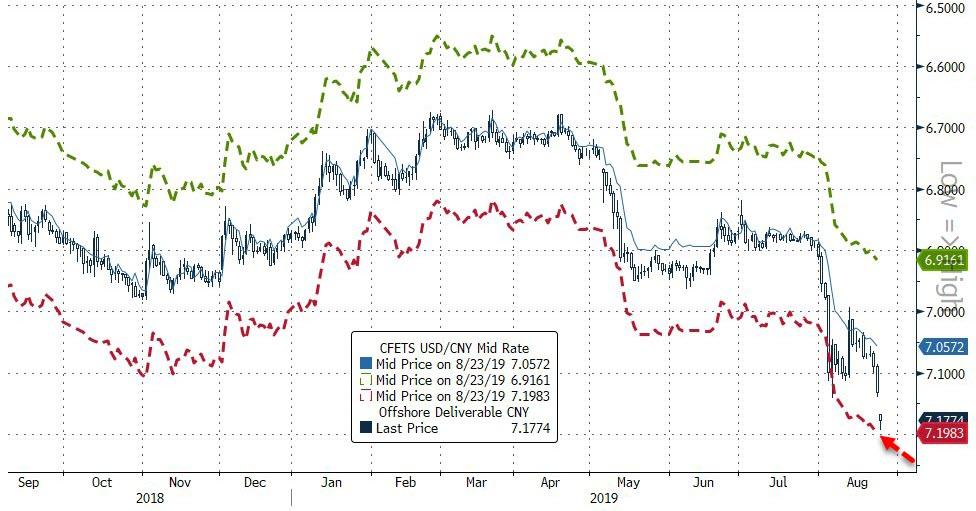 Source: Bloomberg
At the same time, USDJPY is tumbling (Yen strength), testing the lows of the flash-crash from early January... 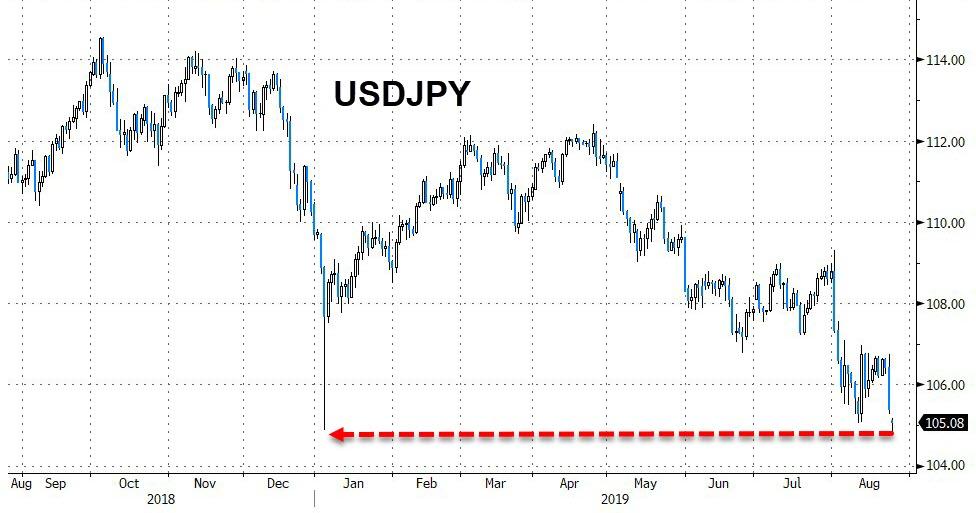 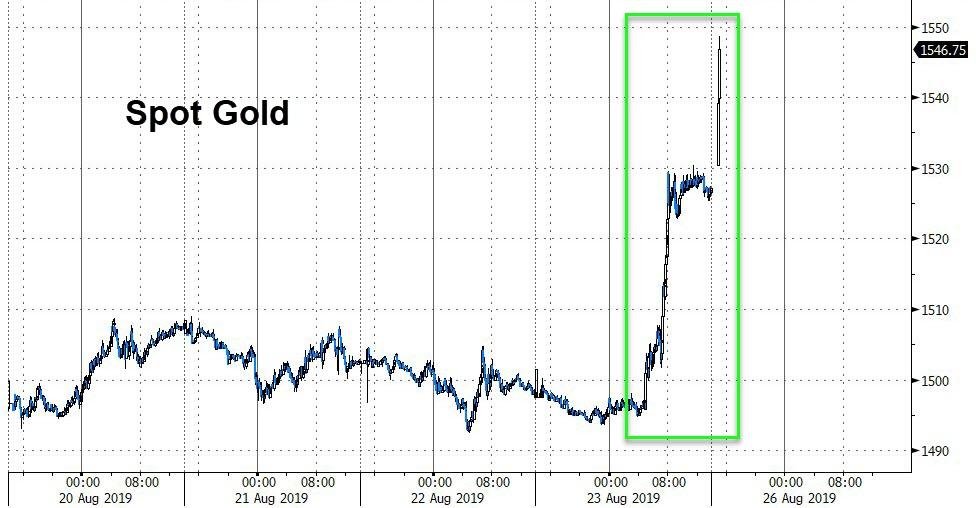 Source: Bloomberg
With gold rising and yuan plunging, the Chinese currency is at its weakest against the precious metal since 2012... 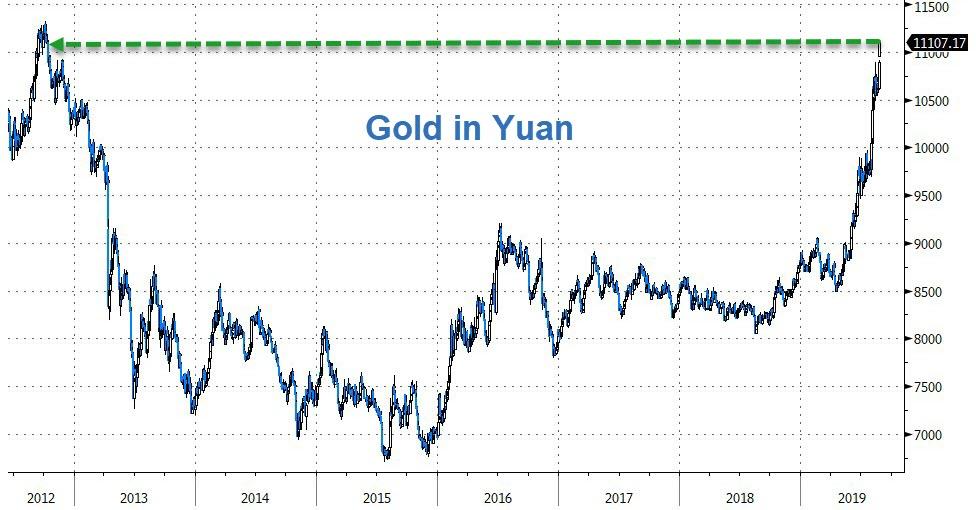 Source: Bloomberg
US Equity futures are reeling with Dow Futures down over 400 more points...

Treasury futures opened up dramatically, implying a 10Y yield of around 1.36% (around 8bps lower in yield). 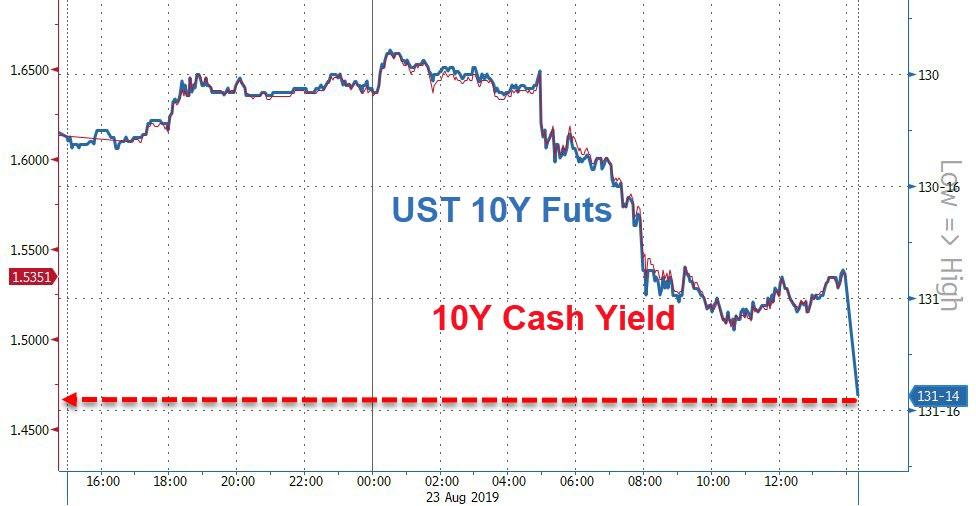 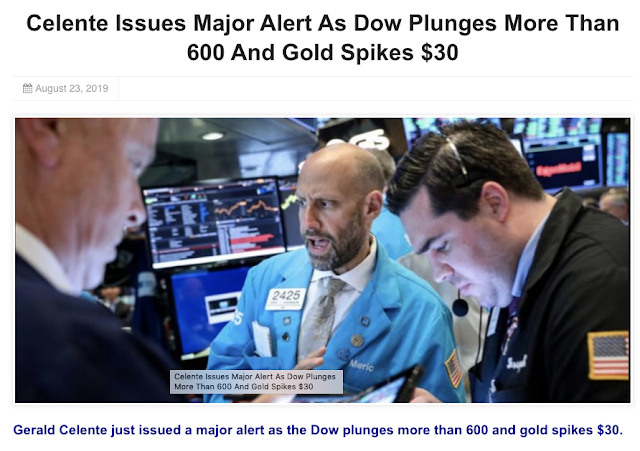 August 23 (King World News) – Gerald Celente:  After a relatively strong market rebound late last week and earlier this week in the U.S. following last Wednesday’s 800-point Dow dive – the worst is yet to come.
Indeed, yesterday, the CNBC morning headline was: “Stocks fall, giving up earlier gains as recession fears rise.”
But, in a clear factual demonstration of the Wall Street Bull’s addiction to cheap money injections and delusional belief of infinitely rising equities, just three days earlier, following the close of Monday’s markets, the CNBC headline read: “Dow rallies more than 200 points as Wall Street continues rebound from August sell-off.”
Why? “Stocks rose sharply on Monday as Treasury yields rebounded, quelling fears of a possible recession,” their economic experts concluded.
“Quelling fears,” on Monday, “recession fears rise” on Thursday?
What a difference a few days make in the make-believe world of mainstream news.
What pushed the markets up following last Wednesday’s worst market sell off of the year?
Doing what is in his Presidential power, the Commander-in-Chief made a call to the CEOs of America’s biggest banks as the stock market plunged. Why? According to the mainstream media, the President asked the bank chiefs to give him a read on the health of the U.S. consumer.
As if he didn’t know! This is the same President who has been bragging about the health of the U.S. economy, that consumers are “doing tremendously well…our consumers are rich,” and as a result of his tax cuts, for which the Tax Policy Center estimates 83 percent of the benefits went to the one percent… average Americans “are loaded up with money.”
Could it possibly be, that with bank shares down as interest rates across the globe dive and treasuries plunge into negative territory, the actions of the President and the Bankster Dons pressured the Plunge Protection Team to artificially prop up the sagging markets?
Indeed, the same market rigging game was played last December when the Dow was having its worst month since the Great Depression.
On the night before last Christmas, with the Dow having its worst week in a decade, and still diving, U.S. Treasury Secretary Steve Mnuchin said the purpose of his call to the six major bank CEOs was “to confirm that they have ample liquidity available for lending to consumers, business markets and all other market operations.”
When the markets opened the day after Christmas, was it assurances there was money to lend – which was not an issue as to why the markets were tanking – or was it the Plunge Protection team that artificially pushed the Dow up 1086 points?
TREND FORECAST:At the time you receive this Trend Alert, the Dow closed down over 600 points and Gold spiked nearly $30 per ounce at $1,528 per ounce, up from $1,332 an ounce since my 6 June Gold Bull Run forecast.
Rest assured, central banks, over 30 of which have already lowered interest rates this year, will continue to lower them, even as they dip lower into negative territory in many nations. And governments across the globe will continue to announce aggressive “stimulus measures” to boost sagging economies.
The monetary methadone cheap-money injections to prop up the addicted equity Bull and stimulus measure to lift sagging economies will push governments deeper in debt, further worsening economic conditions when the Greatest Depression hits.
I maintain my gold forecast of over $2,000 per ounce on the upside, and $1390 on the downside.
https://kingworldnews.com/celente-issues-major-trend-alert-as-dow-plunges-more-than-600-and-gold-spikes-30/
Posted by seemorerocks at 14:38