No media coverage of fires in Central Africa

Out of sight, out of mind.

This seems to be the ONLY coverage of fires in Congo and elsewhere in Africa.

On further perusal THIS COVERAGE IS FROM PREVIOUS YEARS!

This is what the search engines produce... 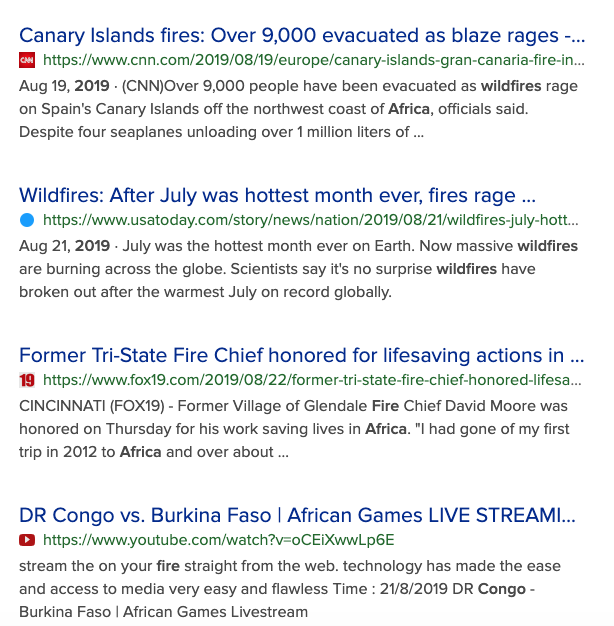 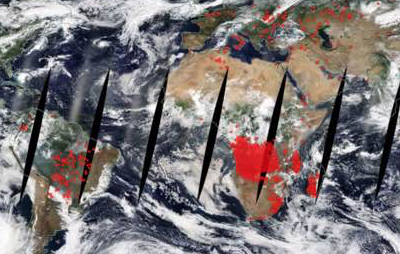 
Description: Hundreds of fires are set every year during the dry season in Central Africa. This true color image from the Sea-viewing Wide Field-of-view Sensor (SeaWiFS) shows dozens of smoke plumes in the Democratic Republic of the Congo on June 29, 2000. Residents burn away scrub and brush annually in the woody savanna to clear land for farming and grazing.

Unless otherwise specified, this article was written by Rhett A. Butler [citation]

Rainforests absorb 20% of emissions annually
(02/19/2009) Undisturbed tropical forests are absorbing nearly a fifth of carbon dioxide released annually by the burning of fossil fuels, according to an analysis of 40 years of data from rainforests in the Central African country of Gabon. Writing in the journal Nature, Simon Lewis and colleagues report that natural forests are an immense carbon sink, helping slow the rise in atmospheric CO2 levels.


Mountain gorilla population in DR Congo increases 12.5%
(01/27/2009) The population of critically endangered mountain gorillas in Democratic Republic of Congo's Virunga National Park increased 12.5 percent in the past 16 months according to a census conducted by the Congolese Wildlife Authority (ICCN). 81 gorillas now live permanently in the park, up from 72 in August 2007.


Commercial bushmeat trade is devastating wildlife
(09/15/2008) Commercial killing of rainforest wildlife is putting biodiversity at risk and reducing sources of protein for rural populations, warns a new report from the Center for International Forestry Research (CIFOR) and the Secretariat of the Convention on Biological Diversity (CDB).


Markets could save rainforests: an interview with Andrew Mitchell
(08/17/2008) Markets may soon value rainforests as living entities rather than for just the commodities produced when they are cut down, said a tropical forest researcher speaking in June at a conservation biology conference in the South American country of Suriname. Andrew Mitchell, founder and director of the London-based Global Canopy Program (GCP), said he is encouraged by signs that investors are beginning to look at the value of services afforded by healthy forests.


Britain, Norway commit $210 million towards Congo rainforest conservation
(06/24/2008) The governments of Britain and Norway last week announced a $211 million (108 million) initiative to conserve rainforests in the Congo Basin. The plan calls for the use of an advanced satellite camera to monitor deforestation in the region and funding for community-based conservation projects.


Does logging contribute to AIDS deaths in Africa?
(06/14/2008) Logging activities in tropical Africa may pose hidden health risks to wildlife and humans according to a veterinary pathobiologist speaking at a scientific conference in Paramaribo, Suriname.


Congo pygmies use GPS to map eco-certified timber concession
(05/29/2008) Loggers have teamed with indigenous Pygmies to establish the largest ever eco-certified logging scheme.


Forest carbon credits could guide development in Congo
(05/28/2008) An initiative to reduce greenhouse gas emissions by offering carbon credits to countries that reduce deforestation may be one of the best mechanisms for promoting sustainable development in Central Africa says a remote sensing expert from the Woods Hole Research Center (WHRC). Dr. Nadine Laporte, an associate scientist with WHRC who uses remote sensing to analyze land use change in Africa, says that REDD could protect forests, safeguard biodiversity, and improve rural livelihoods in Democratic Republic of Congo (DRC) and other Central African nations.


Biochar fund to fight hunger, energy poverty, deforestation, and global warming
(03/10/2008) Biopact, a leading bioenergy web site, has announced the creation of a "Biochar Fund" to help poor farmers improve their quality of life without hurting the environment.


Returns from carbon offsets could beat palm oil in Congo DRC
(12/04/2007) A proposal to pay the Democratic of Congo (DRC) for reducing deforestation could add 15-50 percent to the amount of international aid given to the warn-torn country, reports a new study published by scientists at the Woods Hole Research Center (WHRC). The funds would help alleviate rural poverty while cutting emissions of greenhouse gases and protecting threatened biodiversity.


Logging roads rapidly expanding in Congo rainforest
(06/07/2007) Logging roads are rapidly expanding in the Congo rainforest, report researchers who have constructed the first satellite-based maps of road construction in Central Africa. The authors say the work will help conservation agencies, governments, and scientists better understand how the expansion of logging is impacting the forest, its inhabitants, and global climate.


Illegal logging threatens Congo's forests, global climate
(04/11/2007) Despite government and World Bank assurances to the contrary. a new report from Greenpeace finds that illegal logging is rampant in the Democratic Republic of Congo (DRC). The report, Carving up the Congo, reveals that in spite of a 2002 moratorium on new logging, over 15 million hectares of rainforest have been concessioned to loggers with little regard to the environmental impact or compensation to affected communities.

For this year, this may be the sum of it. 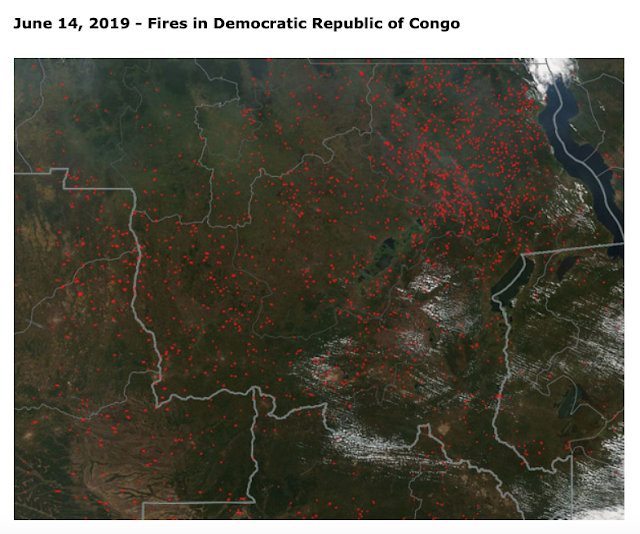