The latest from Brexit

But Some Britons Are Screaming ‘Off With Her Head’ To Queen Elizabeth II. 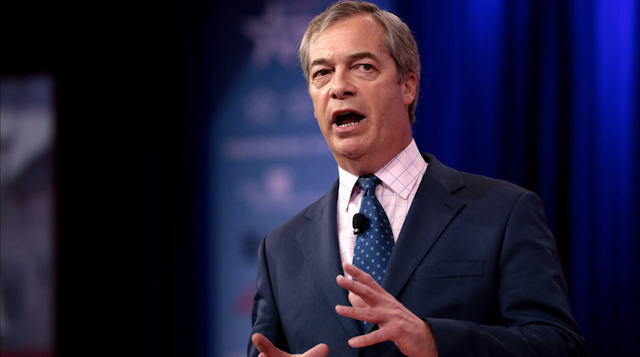 
“The honeymoon’s over.” That’s the message Brexit Party leader Nigel Farage has for Prime Minister Boris Johnson, who he says is willing to “sell out his own people” by putting the UK in a position of weakness in Brexit negotiations with the European Union.

During his podcast this afternoon, Farage repeated the claim, stating:

“Be very careful when you hear Boris Johnson talking about ‘no deal’ and all the big white noise. The real story, I said 10 days ago here, is he’s going back to [former Prime Minister Theresa] May’s withdrawal agreement. He just wants to get the grammar changed, a few words changed, on the [Irish] Backstop.”

“All these people who are wailing and gnashing of teeth know that there are two ways of doing what they want to do. One, is to change the government and the other is to change the law. If they do either of those, that will then have an effect.

“If they don’t have either the courage or the gumption to do either of those then we will leave on the 31st of October in accordance with the referendum result. No party should be afraid of the British people.

"If they have a vote of confidence, let’s see if they can win it.”

Protesters have stormed Rees-Mogg’s home in Bath and North East Somerset—where he lives with his wife and six young children—after he was doxed by former Labor Party politician Howard Simpson. The demonstrations are all part of a group of Labor Party supporters known as Momentum.

With Opposition Leader Jeremy Corbyn’s blessing, they are now calling for a nationwide “Stop the Coup” protest in all major UK cities on Saturday. Another mass demonstration is also planned for Tuesday, at which time MPs will return to the Palace of Westminster following their summer break.

Momentum’s national coordinator, Laura Parker, has vowed to “occupy Parliament,” if necessary, to prevent the prorogation of Parliament that TruNews reported on Wednesday. She also railed against Queen Elizabeth II for granting the suspension order:

“Real power doesn’t sit with the Queen or in Parliament. It’s with us the people—and that’s why we need to take action. Our message to Johnson is this: if you steal our democracy, we’ll shut down the streets.”

But another pro-EU group—this time, one that is allegedly funded by billionaire socialist George Soros—Best for Britain, is suggesting the UK should take things to an even more dangerous level. Referencing the 1649 beheading of King Charles I, who exerted royal prerogative over Parliament, the group put out a tweet that implied Queen Elizabeth II should face a similar fate.

Former Shadow International Development Secretary Kate Osamor has called for the UK monarchy to be abolished in response to Queen Elizabeth II’s decision to grant the prorogation order. She said the queen should remember what happened to her cousin, King Constantine of Greece, in the 1970s after he “enabled a right-wing coup.”

Several other Labor Party MPs have vowed they will “defend democracy” and would have to be dragged out of the House of Commons by police. Others are seeking emergency injunctions from the courts to countermand the queen’s decision.

In the meantime, Speaker of the House John Bercow is vowing he will do whatever he can to prevent the prime minister from suspending Parliament. As TruNews reported Wednesday, he has said he believes the move prevents the House of Commons from doing its job. Today, he added:

“If there is an attempt to circumvent, to bypass or—God forbid—to close down Parliament: that is anathema to me and I will fight it with every bone in my body to stop that happening. We cannot have a situation in which Parliament is shut down—we are a democratic society.”

The Commons leader also dismissed the current protests. He noted that perhaps a million Britons have signed a petition calling for yet another delay to Brexit, but he reminded the press that 17 million “went out to the ballot box to vote to leave” the EU.

Is this man Stalin or Hitler?  He is according to the Guardian 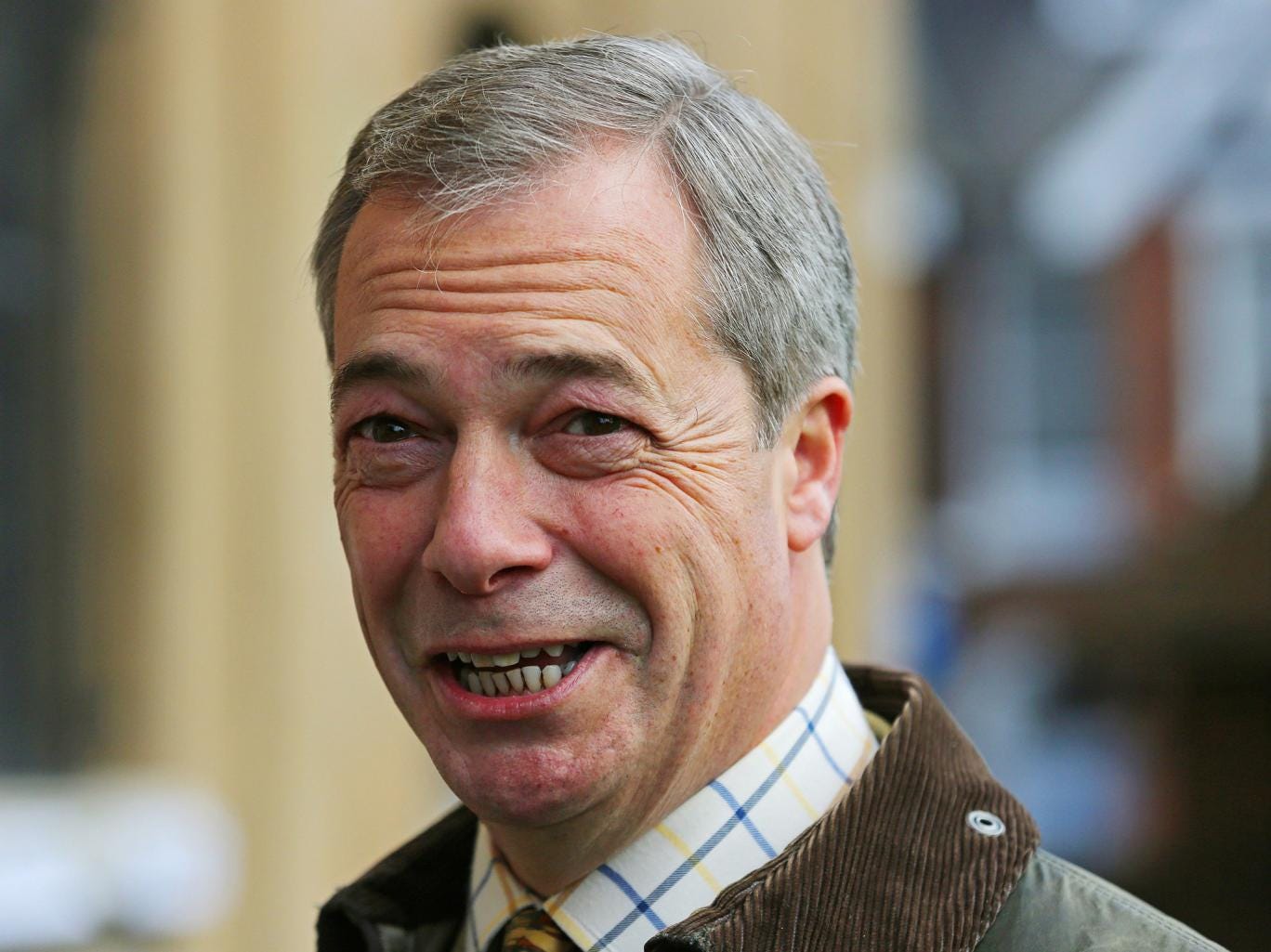 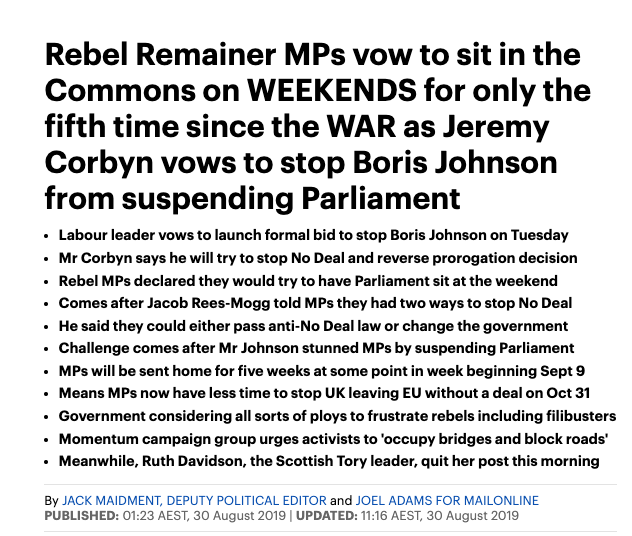 "How to stop a no-deal Brexit" - Coverage by the Independent is more propaganda than news. 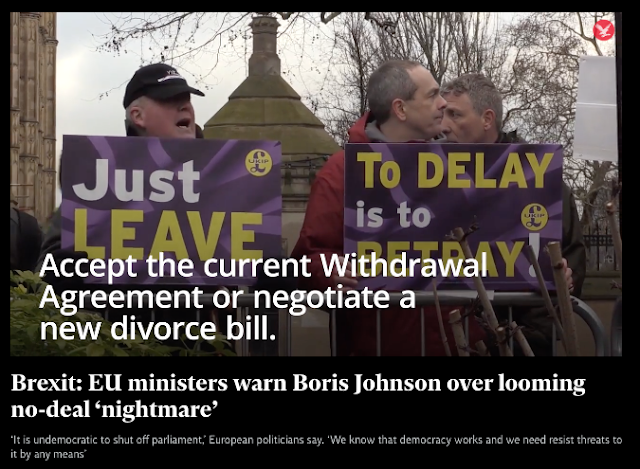 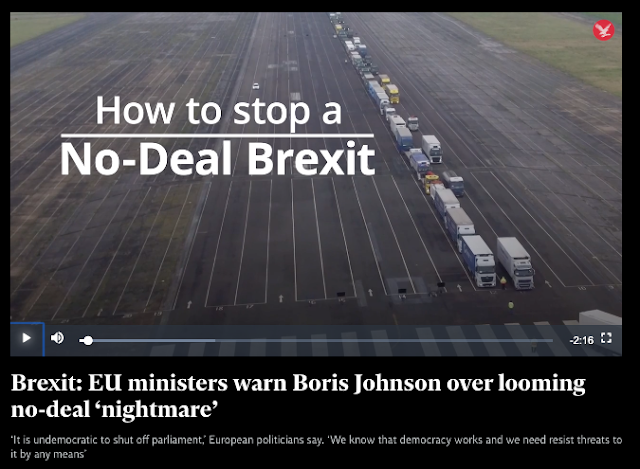