Heat in Antarctica could be driving stormy weather in New Zealand

Exceptionally rare warming above Antarctica may be affecting NZ's weather

One of the southern hemisphere's rarest phenomena may be under way in the skies above Antarctica and could be driving New Zealand's stormy August weather.

Meteorologists are debating whether a sudden stratospheric warming (SSW) began earlier this month, putting a wobble into the polar vortex of westerly winds around the Antarctic and allowing freezing air to escape more easily and head towards southern New Zealand.

Whether one is or isn't already occurring, computer models are showing a much more significant winter stratospheric warming could begin in about 10 days or a fortnight.

Scientists are unsure what is happening in the stratosphere - the second layer of the Earth's atmosphere - this month. In this 2018 photo, the Fiordland College Space Programme's crew, led by teacher Christoph Zink, prepare to launch a helium balloon to rise 33km into the stratosphere from Manapouri.

Only two SSWs have ever been recorded in the southern hemisphere - a major event at this time of year in 2002 and a minor one in 2010. SSWs are more frequent in the northern hemisphere in winter due to land masses close to the North Pole.

Blue Skies Weather forecaster Tony Trewinnard told Stuff that an SSW forecast late last month had begun early this month and had now probably peaked, with temperatures in the stratosphere 20km or more above the Antarctic as much as 20 degrees Celsius warmer than the long-term average. Nacreous ("mother of pearl") clouds high in the stratosphere above Scott Base in the Antarctic play a role in the formation of the ozone hole (file photo).
PETER WALKER

National Institute of Water and Atmospheric Research meteorologist Ben Noll told Stuff he was unconvinced that event was particularly significant, given the temperature rise was still short of the 25C threshold for a minor SSW determined by the Japan Meteorological Agency.

A major SSW is defined as a warming of 30 to 50C at those heights, which is large enough to cause a reversal of prevailing winds through the atmosphere from westerlies to easterlies.

"Something potentially more interesting is signalled in the next 10 to 15 days, showing a warming of 40-50 degrees. If this were to occur, it would be more impressive than what has occurred so far this month in the stratosphere. The March 2018 "Beast from the East" snowstorm blankets London. The reversal from normal westerly winds to bitterly cold easterlies across Europe was linked to a sudden stratospheric warming event over the North Pole.
SUPPLIED

The March 2018 "Beast from the East" snowstorm blankets London. The reversal from normal westerly winds to bitterly cold easterlies across Europe was linked to a sudden stratospheric warming event over the North Pole.

"It is worth keeping an eye on over the next week or two. [But] being a keen watcher of winter in the northern hemisphere, I have seen a number of occasions where the forecast 10 to15 days in advance was too aggressive."

The winter 2002 SSW came ahead of an unusually warm and windy September, followed by the coldest October in 20 years.

The stratosphere is the second layer of the Earth's atmosphere, in which temperatures generally increase with height due to the concentration of ozone. It extends to about 50km above the surface, and starts at altitudes of between 7 and 10km over the poles and about 17km above the equator.

Major SSWs in the northern hemisphere have percolated down through the atmosphere and reversed winter wind directions, leading to frigid easterly winds and very cold, snowy winters across Europe, including the "Beast from the East" in February and March 2018.

Trewinnard said the current SSW appeared to be driving the country's unsettled weather.

"The impact of sudden warming high in the polar atmosphere is to 'knock' the polar vortex out of shape. Over time - it takes two to six weeks - the polar vortex gets a wobble, like a spinning top, and this allows cold air from the Antarctic continent to 'leak' out into the weather systems of the southern ocean.

"Eventually this affects New Zealand as depressions and troughs of low pressure, and cells of very cold air. This can make our weather colder and stormier for a period of a month or two.

"Generally this is looking like a stormy couple of months ahead, with frequent rainfalls, cold outbreaks, and windier than normal weather for the whole country.The periods likely to see the most impact from intense weather systems are the last few days of August and the very beginning of September, and again mid-September." 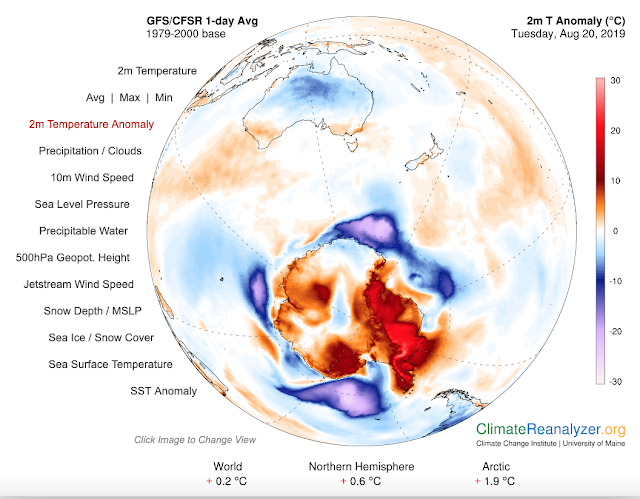 The freezing weather conditions dubbed the "Beast from the East" brought snow and sub-zero temperatures to many parts of the UK and Europe.

Noll said stormier than normal conditions were expected into September, "and it might even last longer than that".

But even with an SSW, it didn't necessarily mean New Zealand would "feel the full impact".

"That could be over South America, or even out over the oceans."