Leaked Documents Show Brazil’s Bolsonaro Has Grave Plans for Amazon Rainforest
DemocraciaAbierta had access to PowerPoints from a meeting between members of the Bolsonaro government. The slides show that the current government intends to use the president's hate speech to diminish the power of minorities living in the region and to implement predatory projects that could have a devastating environmental impact for the Amazon.
By Manuella Libardi

Leaked documents show that Jair Bolsonaro's government intends to use the Brazilian president's hate speech to isolate minorities living in the Amazon region. The PowerPoint slides, which democraciaAbierta has seen, also reveal plans to implement predatory projects that could have a devastating environmental impact.

The Bolsonaro government has as one of its priorities to strategically occupy the Amazon region to prevent the implementation of multilateral conservation projects for the rainforest, specifically the so-called “Triple A” project.

"Development projects must be implemented on the Amazon basin to integrate it into the rest of the national territory in order to fight off international pressure for the implementation of the so-called 'Triple A' project. To do this, it is necessary to build the Trombetas River hydroelectric plant, the Óbidos bridge over the Amazon River, and the implementation of the BR-163 highway to the border with Suriname," one of slides read.


One of the tactics cited in the document is to redefine the paradigms of indigenism, quilombolism and environmentalism through the lenses of liberalism and conservatism.


In February, ministers Gustavo Bebianno (Secretary-General of the Presidency), Ricardo Salles (Environment) and Damares Alves (Women, Family and Human Rights) traveled to Tiriós (Pará) to speak with local leaders about the construction of a bridge over the Amazon River in the city of Óbidos, a hydroelectric plant in Oriximiná, and the expansion of the BR-163 highway to the Suriname border.

During the meeting, the ministers used a PowerPoint presentation that detailed the projects announced by the Bolsonaro government for the region. The presentation, which was leaked to democraciaAbierta, argues that a strong government presence in the Amazon region is important to prevent any conservation projects from taking roots.

The slides are clear. Before any predatory plan is implemented, the strategy begins with rhetoric. Bolsonaro's hate speech already shows that the plan is working. The Amazon is on fire. It's been burning for weeks and not even those who live in Brazil were fully aware. Thanks to the efforts of local communities with the help of social networks, the reality is finally going viral.

The online reaction is far from being sensationalist. This year alone, Brazil had 72,000 fire outbreaks, half of which are in the Amazon. The National Institute for Space Research (Inpe) reported that its satellite data showed an 84% increase on the same period in 2018.

Attacking non-governmental organizations is part of the Bolsonaro government's strategy. According to another of the PowerPoint's slide, the country is currently facing a globalist campaign that "relativizes the National Sovereignty in the Amazon Basin," using a combination of international pressure and also what the government called "psychological oppression" both externally and internally.

This campaign mobilizes environmental and indigenous rights organizations, as well as the media, to exert diplomatic and economic pressure on Brazilian institutions. The conspiracy also encourages minorities – mainly indigenous and quilombola (residents of settlements founded by people of African origin who escaped slavery) – to act with the support of public institutions at the federal, state and municipal levels. The result of this movement, they say in the presentation, restricts "the government's freedom of action".


Those are, according to a slide, "the new hopes for the Homeland: Brazil above everything!"

So it is unsurprising that Bolsonaro's response to the fires comes in the form of an attack on NGOs. On Wednesday, August 21, Bolsonaro said he believed non-governmental organizations could be behind the fires as a tactic "to draw attention against me, against the government of Brazil.".

Bolsonaro did not cite names of NGOs and, when asked if he has evidence to support the allegations, he said there were no written records of the suspicions. According to the president, NGOs may be retaliating against his government's budget cuts. His government cut 40 percent of international transfers to NGOs, he added.

Part of the government's strategy of circumventing this globalist campaign is to depreciate the relevance and voices of minorities that live in the region, transforming them into enemies. One of the tactics cited in the document is to redefine the paradigms of indigenism, quilombolism and environmentalism through the lenses of liberalism and conservatism, based on realist theories. Those are, according to a slide, "the new hopes for the Homeland: Brazil above everything!" 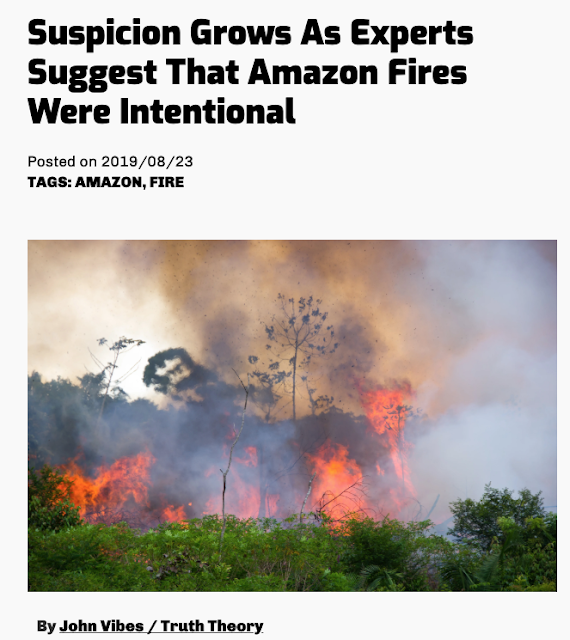 Truththeory,
23 August, 2019
As news reaches around the world that the Amazon rainforest is burning at an unprecedented rate, people are beginning to ask questions about who is responsible. In the past week, since August 15, over 9,500 new forest fires were reported in Brazil, most of them spread across the Amazon basin.
According to Brazil’s National Institute for Space Research, over 74,000 forest fires were started in Brazil this year, which is more than double the 40,000 fires that were recorded in 2018. This represents an 83 percent increase in wildfires when compared to the same time last year, making it the most fires recorded in a single year since the Brazilian government started tracking such matters. 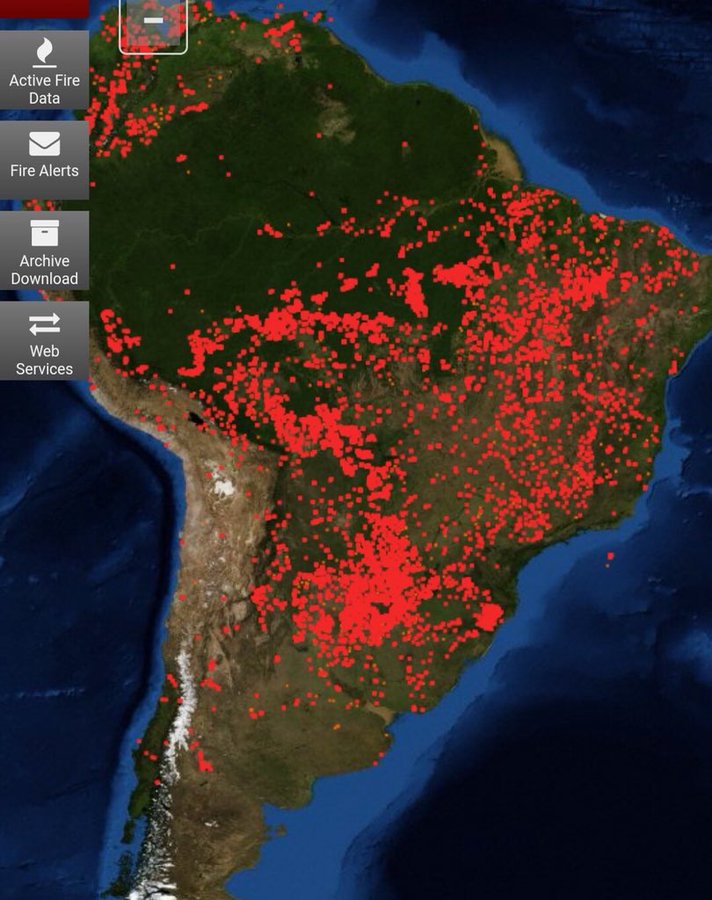 
1,631 people are talking about this
Even before this ominous development, things were looking pretty bleak for the Amazon. Last month, Truth Theory reported on new data from the National Institute for Space Research in Brazil, showing that the region’s rainforest saw an 80% reduction between 2006 and 2012. The report also noted that last year, deforestation increased to the highest levels seen in a decade, with a 13% increase that year alone.
Experts and activists have suggested a variety of reasons for the recent burning, but the common theme is that the government is allowing the rainforest to be ravaged by farmers and corporations for their own personal gain.

The Amazon rainforest provides 20% of the world's oxygen. People are deliberately starting fires in effort to illegally deforest land for cattle ranching. President Bolsonaro is letting this slide!! #AmazonRainforest #PrayforAmazonas


143K people are talking about this
Christian Poirier, program director for the conservationist group, “Amazon Watch,” believes that these fires were started intentionally for the purpose of clearing space for cattle ranchers.
“The unprecedented fires ravaging the Amazon are an international tragedy and a dangerous contribution to climate chaos. This devastation is directly related to President Bolsonaro’s anti-environmental rhetoric, which erroneously frames forest protections and human rights as impediments to Brazil’s economic growth,”Poirier said in a statement.

Worldwide pleas to save the Amazon as fires decimate rainforest.@annenbcnews reports. 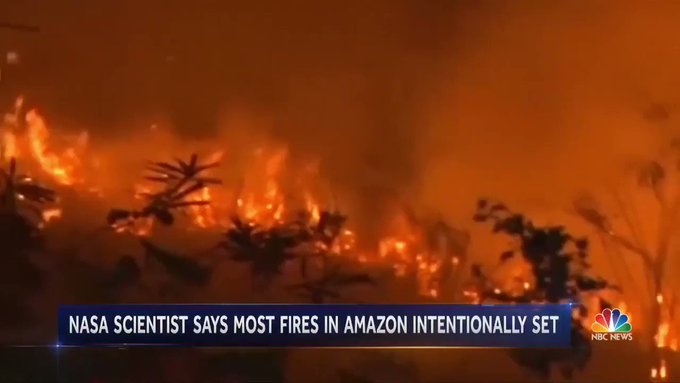 
238 people are talking about this
The newly elected president Jair Bolsonaro campaigned on a misguided platform of stimulating economic growth by opening up the Amazon to industry. Since coming into office, his administration has significantly scaled back environmental protections, essentially giving a green light to loggers, miners, and ranchers to violently expel native tribes from their lands and destroy the local ecosystem.
Poirier believes that the current president’s rhetoric encourages ranchers  “to commit arson with wanton impunity.”
According to a Yale study, cattle ranching is responsible for roughly 80% of the Amazon’s deforestation, and much of the beef that is produced in the region is eventually shipped off to Europe and North America.
Amazon Watch believes that ranchers organized a coordinated “Fire Day” to set the Amazon on fire, CBS News reported.

Just a gentle reminder that the fires in the amazon are intentional. It’s not a forest fire type situation. It’s an intentional setting ablaze of the forest by the fascist brazilian govt + agrobusiness & ranching oligarchs. Wording matters. Don’t hide who is doing this & why.


87.7K people are talking about this
Amazon Watch is not alone. Amnesty International secretary-general Kumi Naidoo also made a statement blaming the current condition of the Amazon on the controversial president.
“The responsibility to stop the wildfires that have been raging in the Amazon rainforest for several weeks now lies squarely with President Bolsonaro and his government. They must change their disastrous policy of opening up the rainforest for destruction, which is what has paved the way for this current crisis,” Naidoo said.
Ane Alencar, the scientific director of Brazilian NGO IPAM (Institute of Environmental Research in Amazonia), told Mongabay that these fires were exacerbated by the deforestation that had already taken place. This is because with fewer trees, the dry season in the Amazon become dryer, and thus more dangerous.
“The fire that we’re seeing today is a fire that’s directly related to deforestation,” Alencar said.
Bolsonaro has responded to the crisis by blaming NGO’s and “Indians” for the fires, and insisting that the problem is not important enough to deserve government resources.
“There aren’t the resources,” Bolsonaro told reporters, adding that, “This chaos has arrived.”
In another interview about the recent fires, Bolsonaro compared himself to the Captain Planet villain, “Captain Chainsaw.”
“I used to be called Captain Chainsaw. Now I am Nero, setting the Amazon aflame,” Bolsonaro said sarcastically.
Furthermore, documents leaked from the Brazilian government show that the current administration planned on building infrastructure projects through the Amazon as way of pushing back against international pressure to put protections on the forest.
A PowerPoint slide leaked from a government presentation about these infrastructure plans said that, “Development projects must be implemented on the Amazon basin to integrate it into the rest of the national territory in order to fight off international pressure for the implementation of the so-called ‘Triple A’ project. To do this, it is necessary to build the Trombetas River hydroelectric plant, the Óbidos bridge over the Amazon River, and the implementation of the BR-163 highway to the border with Suriname.”
One of the tactics listed in the document was framing the Amazon crisis as a wedge issue to divide liberals and conservatives. If the destruction of the Amazon can be reduced to a simple “political opinion,” the legitimate concerns from activists and experts can be easily dismissed as nothing more than a dissenting political opinion. 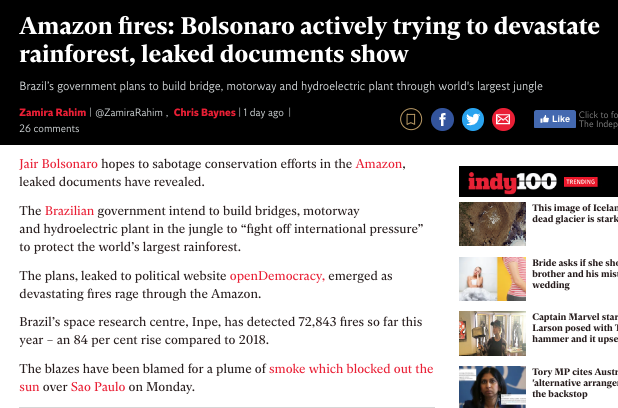