'Beast from the East' aka Sudden Stratospheric Warming (SSW) event

Chilly start to spring on the

cards for New Zealand as

'Beast from the East' nears

New Zealand is in for a "particularly unsettled" start to spring with below average temperatures forecast over the first few weeks.
There was also an elevated risk of sharp cold snaps for September and early October, according to NIWA's spring outlook released this week.
It comes as Auckland experiences one of its wettest Augusts on record. It broke the record today with 29 days of rain in a row.
And it doesn't stop there - tomorrow is also likely to bring patches of light showers meaning the new record will likely reach 30 rain days by the time the month is over.
It also means Auckland has now had two record months in a row after there was 28 days of rain in July - a feat of Mother Nature that broke an earlier record dating back 10 years.
The previous rainiest month was August 2010 with 27 rain days.


The main driver of the current unsettled weather is a Sudden Stratospheric Warming (SSW) event that started to unfold in the polar stratosphere, about 30km above Antarctica, this week.
These events involve a dramatic warming of the air at the stratospheric level by at least 25C, and have the potential to mess with a ring of stormy and freezing weather that encircles Antarctica, which is at its strongest at this time of year – and which we know better as the polar vortex that's been dubbed the "Beast from the East".
The flow-on impacts to weather on the ground could take several days to weeks, but Niwa was forecasting an elevated risk for periods of unusually active weather during spring 2019, including sharp cold snaps, especially in the first half of the season.

An unusual atmospheric phenomenon is amassing in the stratosphere above Antarctica, called a Sudden Stratospheric Warming.

There have only been

such events on record & number

is possible next week!

It may contribute to unsettled, chilly weather across NZ in Sep-Oct 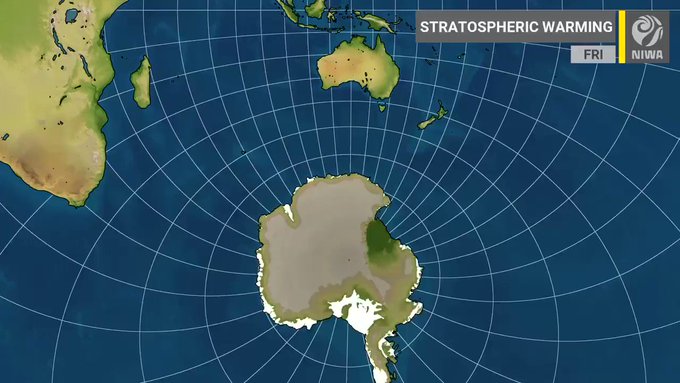 Niwa meteorologist Chris Brandolino said while this weekend would provide a warm, fine start to spring, by late next week and the following week the SSW would start to impact bringing below average temperatures.
Those involved in the country's primary sectors such as agriculture should pay close attention to weather forecasts to assist with mitigating potential impacts.
Overall spring would bring mostly average temperatures, with potentially slightly cooler than usual weather for the north and west of the South Island.
Rainfall and soil moisture was forecast to be near normal for most regions.
There have only been two SSWs on record in the Southern Hemisphere: a major one in September 2002 and a minor one in September 2010.
SSWs were more common in the Northern Hemisphere.
For New Zealand, the 2002 SSW event resulted in a significant cold outbreak in October while the 2010 event was associated with record rainfall during September.

NIWA - These are the people paid to obfuscate and lie about abrupt climate change in this country.