Worst market in Hong Kong since 2008

Hong Kong stocks remain in a bear market (-20% from 1Q18 peak). They're poised to record the worst corporate earnings since at least 2008 as the local political situation and trade war continue to deepen in 2H19.

Data compiled by Bloomberg show a 19% slump in operating income for Hong Kong stocks, would be the most significant contraction for Hang Seng Index companies since the financial meltdown in 2008. 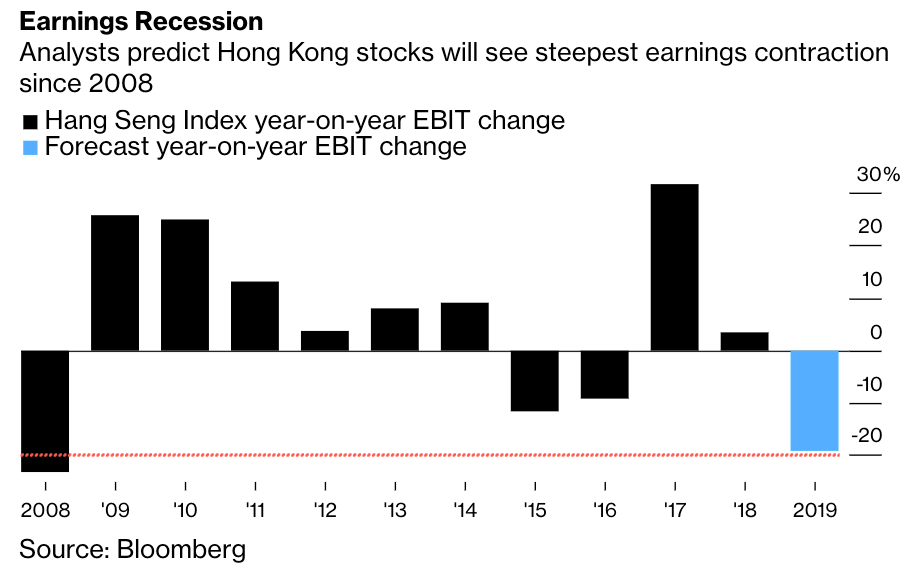 "The third quarter could be even worse given the local political situation and the trade war escalation," said Jackson Wong, asset management director at Amber Hill Capital Ltd. "Potential downside surprises have not been fully reflected in share prices."*chart

Shangri-La Asia Ltd. fell 7.4% on Thursday and 2.7% on Friday after telling investors "political events" in Hong Kong depressed business at its hotels in the city, while a weaker yuan hurt revenues in mainland China.

Cathay Pacific, the leading airliner in Hong Kong, said political and social turmoil would have a "significant impact" on revenue for August.

The Hong Kong and China Gas Company has seen its shares dive nearly 10% since Tuesday after it said the local business environment is "full of challenges."

Last week we reported on a hotel crisis that was developing. Here's what we said:

"Hong Kong might not be able to avoid a financial crisis this year or next despite possible stimulus packages to shore up its faltering economy amid violent protests across the city. This has led to a rapid decline in tourism, forcing major hotel chains in the city to substantially slash room prices."

The escalation of the trade war and at least 11 weeks of protest are also damaging the property market and retail sales.
HSBC Holdings Plc and BOC Hong Kong Holdings Ltd have seen their shares down significantly this month with the risk of capital flight building as there is no end in sight to the turmoil in Hong Kong.
And perhaps the global economy has opened up a cycle of vulnerability where a shock could trigger a worldwide recession. That shock could be the events playing out in Hong Kong at the moment. Investors should be on high alert for possible spillover effects into international markets in the coming quarters.
Posted by seemorerocks at 19:37