"Coalition Of The Willing" 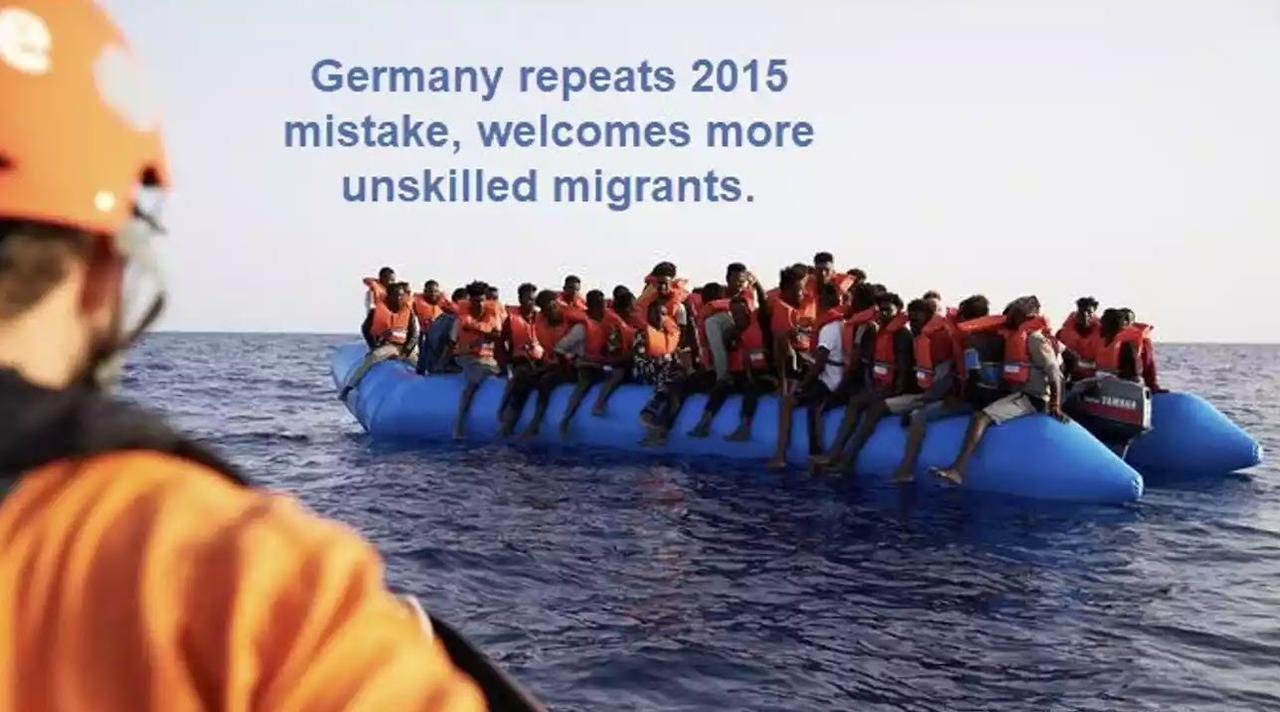 Germany should promote a "coalition of the willing" among European Union countries that are prepared to accept refugees saved in the Mediterranean Sea, Foreign Minister Heiko Maas said Saturday.
"We must now move forward with those member states that are ready to receive refugees — all others remain invited to participate," he told the RND media group.
Germany would be willing to make a substantial contribution to the alliance and accept a set share of refugees as part of a "binding" redistribution system, he added. Maas, a Social Democrat, said that disputes between EU countries about redistributing refugees "must no longer" impede an agreement on saving migrants from drowning in the Mediterranean. "This blockade must finally come to an end," he said.
Maas's proposal was immediately rejected by Austria's former chancellor, Sebastian Kurz. Kurz, whose conservative People's Party is the frontrunner to win Austria's parliamentary vote in September, dubbed the common refugee policy a failure, adding that all Mediterranean migrants should be sent back to their home countries.
"The distribution of migrants in Europe has failed," Kurz said on Saturday. "We are once again discussing ideas from 2015 that have long proved impractical."

Hello foreign minister.
Please consider the idea that the EU is puking on both more migration and more Europe. 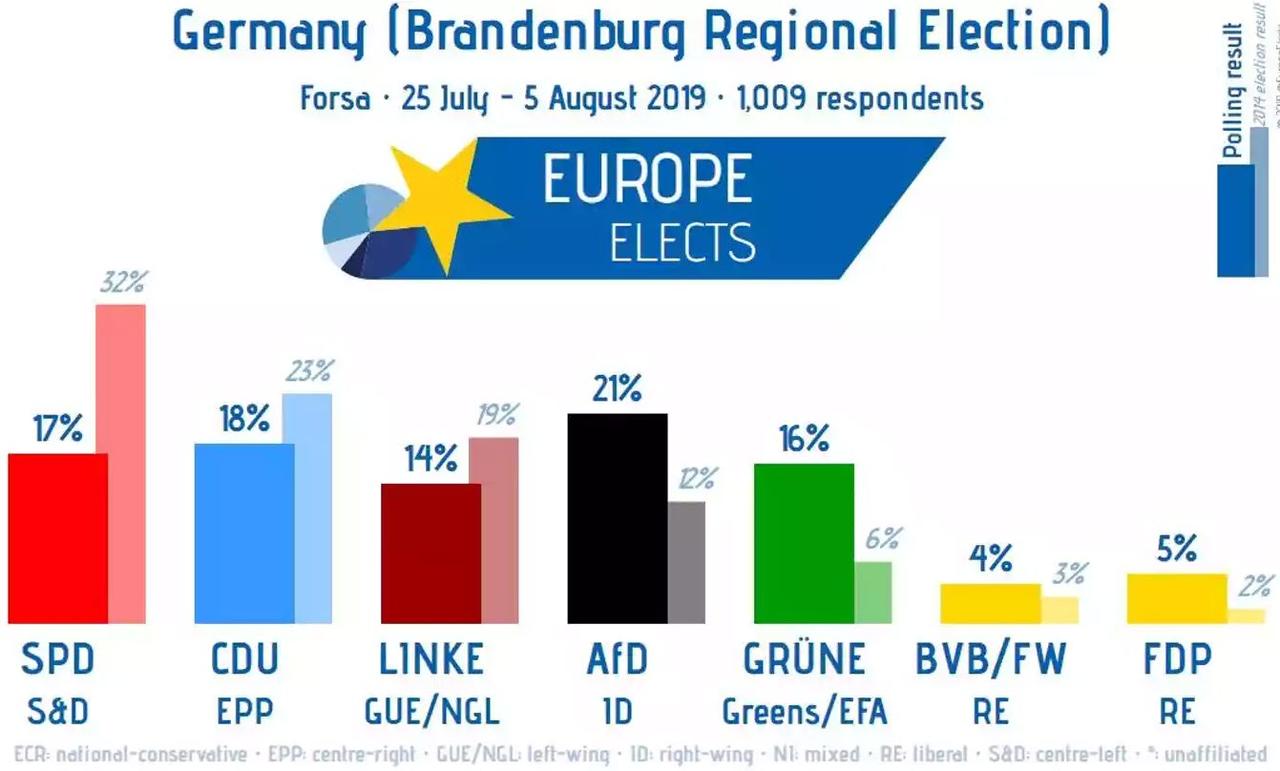 Excuse me for pointing out that the anti-immigration, anti-Euro AfD party is currently poised to win the Brandenburg Election on September 1.

Not Just One Poll

Polls are just that. And while I freely admit 21% is not a majority, I would also point out that FDP and much of CDU is against "more Europe", especially more immigration.

On May 15, 2019 The Local reported 'Germany's Future Depends on Immigration and Integration’: Merkel
If you "depend" on low-skill immigration, what the hell does that say about your current population?
Yeah, let's welcome millions of unskilled migrants, give them free money, free housing, free this, and free that while they do not speak German and have no desire to ever speak German.
Merkel's government "grand coalition" damn near collapsed over immigration.

How is SPD Doing? 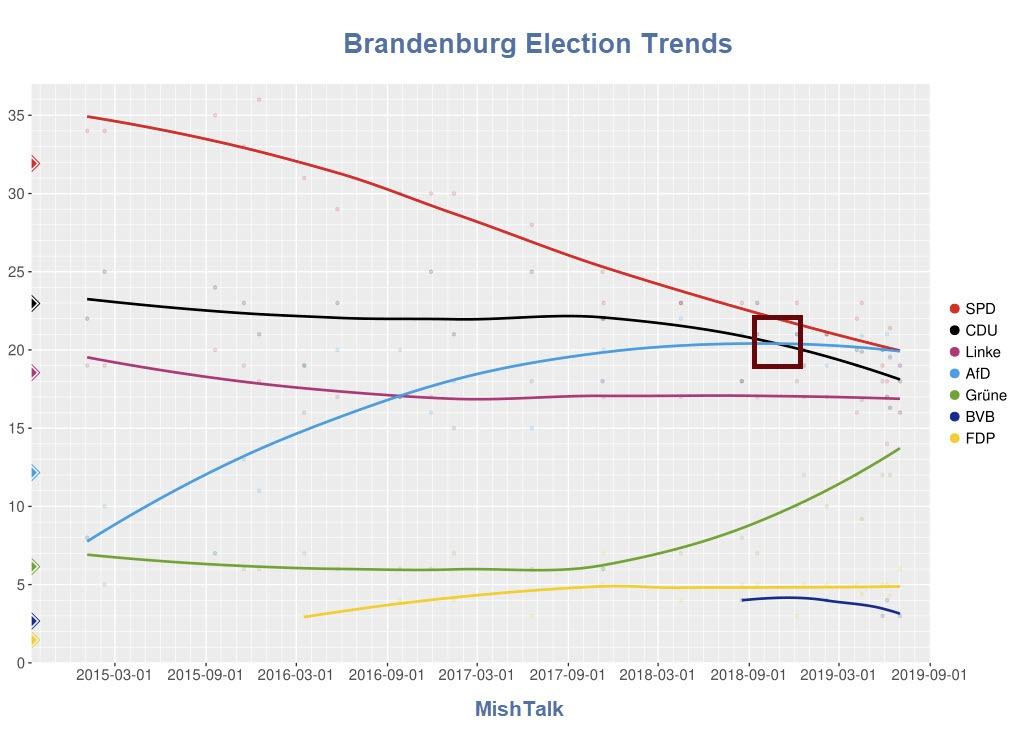 I ask "How is SPD doing" because Merkel's foreign minister Maas is a member of SPD.

Some of the demise of SPD is simply the "Merkel Effect".
The country is clearly sick of Merkel. And because of SPD's affiliation with Merkel, support for SPD has plunged like a rock thrown from the Golden Gate Bridge.
The Greens are pro-immigration but look closely.
The collapse of CDU is an anti-Merkel effect. And most of the demise of SPD corresponds to the rise of AfD, not the rise of the Greens.
Posted by seemorerocks at 15:43