RT,
17 August, 2019
The legal team of Jeffrey Epstein said they disagree with the medical examiner’s ruling that their client hanged himself. Promising their own investigation into his death, they have demanded CCTV footage from his prison cell.
“No one should die in jail,” the lawyers said in statement, which blasts the conditions in which Epstein was held at the Metropolitan Correctional Center in New York as “harsh, even medieval.”
Lawyers were “not satisfied with the conclusions of the medical examiner” on the cause of death of the alleged multi-millionaire, who stood accused of sex-trafficking underage girls. The examiner said that Epstein committed suicide in his cell on August 10 by using bedsheets to make an improvised noose.
The death swiftly prompted conspiracy theories alleging that Epstein was murdered by some of his high-profile friends over fears that his testimony could expose their involvement in the pedophile ring. What fueled the theories was public disbelief that such a notorious figure could have been left unguarded, especially after a previous attempt to take his own life.
In order to find out what really happened, the lawyers said they will conduct their “own independent and complete investigation” into Epstein’s death. They promised to take legal action to gain access to the “pivotal videos” from the prison “if they exist as they should.”
Epstein’s “safety was the responsibility of the MCC,” the lawyers wrote. “It is indisputable that the authorities violated their own protocols.”
The man was put on ‘suicide watch’ on July 23 after being found unconscious with bruises on his neck. However, he was removed from intensified supervision just a week later.
Multiple reports say Epstein was housed alone at MCC after his cellmate was transferred. The guards, who were on duty on the night of his death, are also claimed to have fallen asleep due to working overtime.
Epstein’s death is currently the subject of four federal investigations, with the night guards being among those probed. 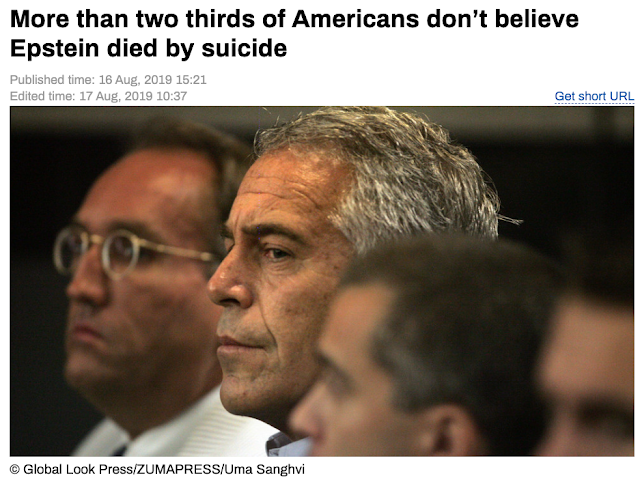 https://www.rt.com/usa/466657-americans-believe-epstein-murdered-poll/
Posted by seemorerocks at 18:45