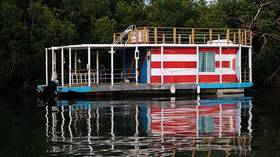 US President Donald Trump has approved an emergency declaration for Puerto Rico, instructing federal agencies to handle all disaster relief efforts on the island as it is about to be hit by tropical storm Dorian.
The Department of Homeland Security and the Federal Emergency Management Agency (FEMA) have been authorized to coordinate the disaster relief efforts “which have the purpose of alleviating the hardship and suffering caused by the emergency on the local population,” the declaration states.

See Ryan Sloane's other Tweets
FEMA is specifically empowered to “identify, mobilize, and provide…all equipment and resources necessary” to fend off the impending humanitarian crisis.
Dorian has been gathering momentum as it sweeps through the Caribbean, having already caused power blackouts and knocked down trees in Barbados and St. Lucia. It is feared that the island, which is still reeling from the devastating 2017 hurricane Maria, might sustain a direct hit from the storm, which is forecasted to reach near-hurricane strength before making landfall on Wednesday night.

The U.S. National Hurricane Center located Dorian some 300 miles of Ponce, Puerto Rico on Tuesday. The storm, with sustained winds reaching 50 mph as of Tuesday night,  is projected to become more powerful within the next 24 hours.After it touches down in Puerto Rico, Dorian is projected to go northwest to the Bahamas, moving towards eastern Florida, which it is predicted to reach on Sunday night.
Trump has faced a near-constant torrent of criticism for his handling of Hurricane Maria, with opponents and local authorities blaming the US president for turning a blind eye to the plight of the people there as many of the locals are still living in makeshift homes or ramshackle buildings and are subject to occasional power outages.
Trump has brushed off all the Maria-related criticism, instead boasting about the “fantastic job” his administration has done to mitigate the disaster and the amount of money it funneled to the island.
Trump took to Twitter again on Tuesday to hail the multi-billion dollar but ill-fated relief effort he had greenlighted for Puerto Rico, claiming it was “an all-time record of its kind for “anywhere.”’

Wow! Yet another big storm heading to Puerto Rico. Will it ever end? Congress approved 92 Billion Dollars for Puerto Rico last year, an all time record of its kind for “anywhere.”

However, his critics argue that the money allocated for the island ultimately failed to reach those in need.
Last month, tens of  thousands of water bottles intended for hurricane survivors in Puerto Rico were found sitting in a field unopened.
Puerto Rico declared a state of emergency on Tuesday, and has been placed under a hurricane and a tropical storm watch.
Posted by seemorerocks at 17:37