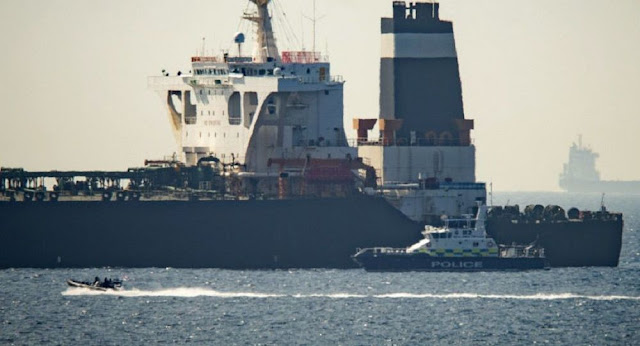 The tanker, carrying Iranian oil, was previously seized by Gibraltar authorities following a tip from the US that it was allegedly travelling to Syria in violation of EU sanctions. It was later released on 15 August, despite last-minute attempts by Washington to prevent this.
The warrant that the US Justice Department issued on 16 August to seize the oil tanker, previously known as Grace 1, was filed and registered despite an apparent mistake in the text. The warrant claims that the complaint against the ship was filed on the 16 November, instead of August, 2019. Notably, the stamp confirming the receipt of the warrant showed the correct date.
The document also uses the ship's old name, Grace 1, instead of its new one, which was adopted soon after its release from detention in Gibraltar – Adrian Darya – according to the deputy head of the Iranian Ports and Maritime Organisation, Jalil Eslami.

© REUTERS / JON NAZCA
Iranian oil tanker Grace 1 sits anchored awaiting a court ruling on whether it can be freed after it was seized in July by British Royal Marines off the coast of the British Mediterranean territory, in the Strait of Gibraltar, southern Spain, August 15, 2019.
The US issued the warrant soon after a previous failed attempt to seize the ship in Gibraltar, where it was held for over a month. According to the document, the tanker, along with all of its oil cargo and $995,000 are subject to forfeiture based on alleged violations of the International Emergency Economic Powers Act (IEEPA), bank fraud, money laundering, and supporting terrorism.
British authorities in Gibraltar detained the Grace 1 on 4 July following a tip from the US, which claimed that the tanker was carrying oil destined for Syria in circumvention of EU sanctions against the Arab Republic. Tehran vehemently denied the claims.
The tanker's detention sent Iran-UK's ties into downward spiral, with Tehran denouncing the detention as illegal and vowing to seize a British vessel in response. One such ship was detained, but due to alleged violations of maritime laws and not in "retaliation" for the Grace 1, Iran assured.

Earlier this week, the Iranian oil tanker Grace 1 was given permission to leave Gibraltar after spending a month in detention after it was seized by UK marines.
Watch Iranian oil tanker Grace 1 leaving Gibraltar, a month after it was formally detained on suspicion of breaching EU sanctions against Syria.
Commenting on the issue, acting Spanish Foreign Minister Josep Borrell claimed that the vessel was detained at the request of the United States, which has long been seeking to curtail Iranian oil exports.
The Gibraltar government later confirmed that Washington had made a last-minute request to halt the release of the seized Iranian vessel on a number of allegations.
Posted by seemorerocks at 18:41