The Australian drought - only in local media

as no water, feed prices bite 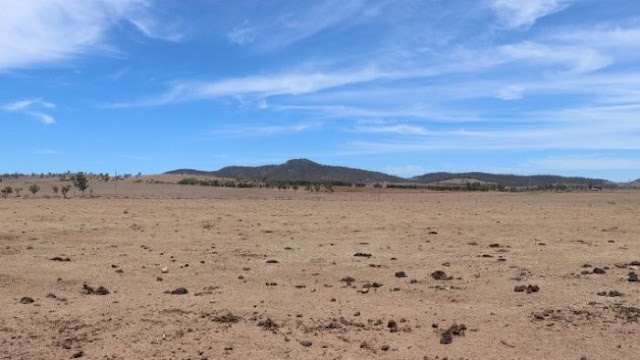 NO WATER and prohibitive feed prices mean livestock producers are facing an agonising choice - hold on and loss more money or sell up.

With the devastating drought showing no signs of easing, many producers have already made the decision to cut their losses and sell their herds.

Laidley cattle auctioneer David Stariha said the number of cattle being sold from the region was unprecedented.

"The cattle just keep on coming every week,” he said.

"Usually this time of the year numbers are down but numbers are up - we're having big sales every sale.

"People are just having to sell, they've got no choice.

"I had a person ring up last week and booked in 20 head - they ended up selling 190. They got them in the yards and just sold them - the drought's having too big an impact on them.”

Mr Stariha described the drought as "relentless” and said much of the cattle from the area was being sold out west but this would eventually have to give.

"There's a lot of people now that have already sold off all their heard,” he said.

"Guys that usually run 80-100 head don't have a beast on the property and that's very common. We're losing more every week.”

The announcement by Lockyer Valley Regional Council that it would host a conference with livestock producers to discuss support options was a positive move for Mr Stariha.

"They're on the right page doing it,” he said.

He said the forum could be an important step in helping producers in the short term.

Mr Stariha said while discounted water would be a huge help for those soldiering on, mental health support was also vital.

"The mental health impact that it's had on producers is massive,” he said.

"People's lives have just been devastated by it - turned upside down.

"People have been on their properties for second and third generations and they just cannot do it more. There's no relief.”


He said any feedback from farmers had to be taken on board, as they knew what they needed to survive, and they would likely welcome any sort of help.

"Talk to the farmers, find out what they think the best ways are to benefit them,” Mr Stariha said.

"These people - they'd be happy with anything they can get at the moment.”

LIVESTOCK owners will be able to discuss their concerns and the impact the drought is having on their operations at an upcoming forum hosted by Lockyer Valley Regional Council.

The council will put a spotlight on the drought and its impact when it hosts a Livestock Farming Drought Support Forum.

Livestock producers will have the opportunity to come together and discuss the drought next month and Mayor Tanya Milligan is encouraging local farmers to be involved in identifying support options.

"The situation for many local livestock farmers is critical and council would like to hear directly from those affected, so the community can respond more appropriately,” CrMilligan said.

"This will be an opportunity for local livestock farmers to work together on identifying meaningful drought supportoptions for the next three to six months and beyond.”

Other issues that will be discussed include: what support is already available and how to access it, how any future drought funding could best be allocated and how the community can better rally together through the drought.

The forum will be workshop-style, with participants to be seated around tables, working through a series of questions and providing collective responses.

The forum will be held on Sunday, September 22, from 1-3.30pm at the Lockyer Valley Cultural Centre.