Reflections on responses to the climate predicament

The interview I never got to give

I was invited by NZ researcher Ben Vidgen to give an interview on his new radio station. He set out a loose outline of what we were to discuss, including "Climategate".

All that was supposed to be involved was that I would ring in at a particular time and we would have a nice, relaxed conversation, "just like in a cafe".

I went to considerable lengths to prepare, including going out to buy a cellphone so I could call in without paying 35c a minute to do so - something that was attended by two visits to the shop and then to Vodafone - just to get it so I could use it.

By the time it came around to ringing in was already feeling very unwell and was told, could I ring back in half-an-hour because he had "lots to do". Then, could I ring back in 5 minutes. When I rang back there was no reply and when I did get through I could not hear properly, having been told to take off the headphones which I had prepared to help me follow the conversation.

I was supposed to just hang about until they worked out their technical problems.

This was not how I do things so when we reached about an hour after the scheduled time I just rang off and went for a walk and spent the rest of the day resting and recovering.

I had put a few thoughts together which I shall share now:

We get otherwise quite rational and well-informed people saying things like, "this is extreme weather caused by "global cooling" (sic) and not global warming".

None of this comes with a skerrick of proof and is always related back to theories about the UN, Agenda 2030 and so forth.

Some of what is claimed seems overblown to me but then again when I see what the mainstream has to say about climate change.

What we have is physical reality – actual climate change that is happening far more rapidly than anyone ever imagined.

I have been following this for too long and monitoring changes in real time for too long for there to be any doubt in my mind.

As a sidebar, I actually prefer the original term "greenhouse effect" - because that it is what it is (something that I have been aware of since the age of 12). Either that or "global warming" (or heating) causing catastrophic climate change" .

THAT is an accurate description of what is happening.

So we have the actual reality.

Mother Nature does not care a brass razoo about what humans THINK.
It simply IS.

Then we have stuff happening on the edge, all related to the response (or lack of) from humans.

On the one hand we have so called "climategate" (which Vidgen wanted to ask me about),  which is saying that the whole thing it’s just a "scam" and that "scientists are faking the evidence."

I’ve never really looked into the arguments of deniers carefully because I know what the physical reality is, but my deep suspicion is that if you asked who benefits, tit could be traced back to the oil companies.

Put simply, the deniers are the dupes of the oil and coal companies and the like (the first time I saw this was 30 years ago with a full-page article from someone in the NZ coal industry).

And then, on the other hand, we have the denial of the mainstream that will ban talk of climate change unless it is coupled with "solutions".

The only results of climate change large parts of the media will talk about relate to sea level rise - and all connected with a magic date, 2100.

Recently, information has come out that has turned 2050 into the new 2100 as it is shown that melting is happening 70 years earlier "than previously expected"

That is three generations!

Amongst the scientists we have those who literally sit in front of their supercomputers and build their models which posit "the shit hitting the fan" by about 2100, and those who are doing work on the ground based on observations.

Through the time I have been following this I have observed a debate, or rather a conflict, between the consensus-based IPCC people with their computer models that have been shown to be out by 70 years -  and those who are doing research on the ground and observing what is really happening on the ground.

This latter group are often described as "alarmists" by the former group, but are being proven correct.

One thing the denialists do have right is to say is that climate change as presented by the IPCC, governments and the media is fully linked with a globalist agenda that is corrupt.

It is linked with the destruction of the "old economy" and the bringing about of a "new industrial revolution" based on new technology.

Much of the "new economy" is predicated on having plenty of time (hence 2100), and magical thinking that is highly unlikely to bring the results that are touted and is based on a new colonialism, the prime example of which I regard to be the admonition to go completely over to electric cars, which relies on an easy source of earth minerals and the mining of cobalt from mines in countries such as the Congo using slave child labour.

This is a combination of the worst of colonial and imperialist thinking with technological utopia and magical thinking.

Part of this is the whole structure of the IPCC and the UN which goes something like this: 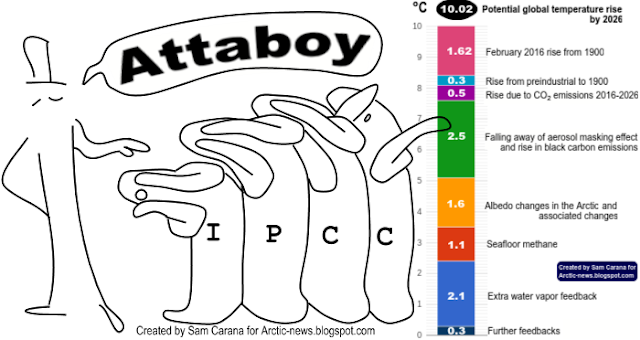 Much of the work done by scientists (and computer modellers) takes time so that it may already be out of date by the time the reports even hit the IPCC. Once the scientific papers come out, are peer-reviewed and finally hit the IPCC they have to go through a process of political consensus.

The data which comes out of the IPCC may be years out of date and then that is used by various governments to determine their policies, so the picture that we are getting is nothing like what is happening to the environment in real time.

We do not need lies by the likes of Al Gore, and the UN - which conspire to completely distort the science to the extent that the computer models are 3 generations out in their predictions.

All of this is the very opposite to the conclusions of those who believe this is "a scam".

Over the last year I have started to realise that there are other things going on as I have observed changes in our skies and looked for explanations.

Through that I have become almost convinced that there is manipulation of our weather and climate going on that is in addition to human-caused climate change.

In fact, geoengineering is being used in a futile attempt to mask the very real effects of global heating.

This is ignored by 90 percent of those who believe in "chemtrails" as a explanation - something that frustrates me at least as much as those who scoff at the whole idea.

This has led me to revise previous assumptions, and that has put me at odds with yet another group. 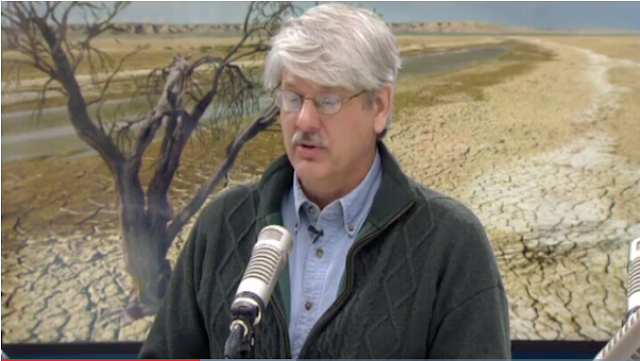 A few months ago I was approached by Kevin Hester to appear on his and Guy McPherson's radio show, Nature Bats Last.  It was, I was told, to say "thank you" for all I had done.

After the hostile visit I had a few months ago I realise it was to put it all into the past tense.

A visit from Prof. Guy McPherson- An act of rejection?

Going on the show (which was connected with "technical problems" and an inability to connect which, it was implied, was my fault, the result was far from what I thought it would be. By the time I came on air I was pretty stressed.


I was, in effect being booted out of the "tribe" that I was never truly part of.

Listening to it now it sounds more like a valedictory than a meeting of minds. Kevin Hester said I had been working on their behalf. I can say I have never worked on anyone's behalf.

What for? I will never know, because these people will never honestly say, but I have my suspicions.

I think it comes down to doing my own research that involves thought processes and conclusions that did not fit well with the ideology of the tribe, especially at a time when they have stopped doing any form of research and monitoring of the ice from people who want to go round either with their hands on their heads proclaiming "we're all going to die" or partying because the blue sea event didn't happen and we are "safe for another year"

I strongly suspect the militant and cynical atheists who think that they are, with their egos, the apex of the Universe and who think they don't need a God or Higher Principle, are going to have just as hard a time as those who will (and are) being caught like possums in a car's headlights.

My response to all of this is to stay in the present moment as best I can, from one day to the next, to keep up monitoring while I still have the energy, and most importantly to stay true to myself at the risk of offending others simply by speaking my truth.

This is not the time to start lying, either to myself or others.

The end is, indeed near, and it is time for people to get their spiritual houses in order.

Posted by seemorerocks at 19:20