As I peruse the news this morning what alarms me more than anything else is the SILENCE. Some of the people who ARE reporting on this have their own biases and so may be jumping their gun, reporting World War 111 by the end of the day.

I don’t think that is going to happen but there is no doubt that there is a build-up to war that is errily similar to 2002-3 when Netanyahu became a major voice for war and 2013 when he played a similar role.

I am particularly concerned by silence by outlets close to the Russan point-of-view like the Duran that, almost 24 hours later still have not mentioned (let alone commented on) yesterday’s attack with bunker bombs (or was it a tactical nuke?) on Syrian/Iranian positions – another act of war worse than the “allied” airstrikes a couple of weeks ago when the Russians stood aside and let the attacks happen. 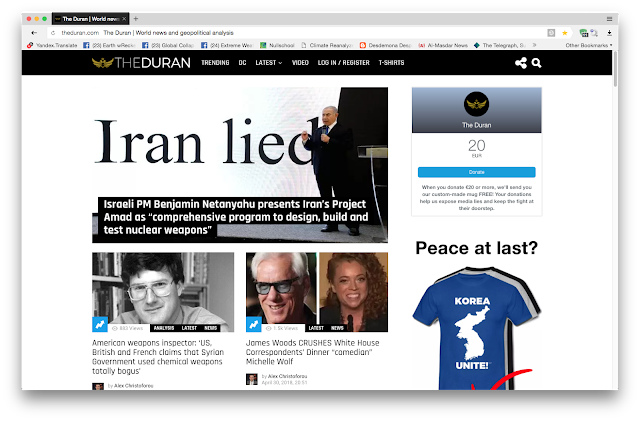 What I see from that quarter is continuing moral outrage at something that happened a fortnight ago, as well as at Bibi netanyahu's speech.

In other words nothing.

What I fear is that we have appeasement on the part of the Russians coming from a praiseworthy effort not to give way to provocation and be instrumental in the launch of World War 3. The result of not standing up now is that there will be further (and worsening) attacks such as we saw yesterday until Russian will be boxed into a corner and will have no alternative but to respond – and with nukes.

I can thoroughly recommend this interview with Paul Craig Roberts before the recent airstrikes, censored, as usual, by You Tube. I am coming round to a position where Roberts has the most realistic analysis of all.

This is highly alarming.

Listen to the interview here:

In the meantime I am grateful for coverage on this from the likes of Steven ben-Noon and Hal Turner both of whom may leap to conclusions but are providing good reporting. In covering this I have had to bypass normal channels and resort to these sources as well as Twitter.

Here is Hal Turner who has covered today’s events UP TO Bibi Netanyahu’s speech.

I shall spend the rest of the day trying to find corroborating sources and to fill in the gaps. 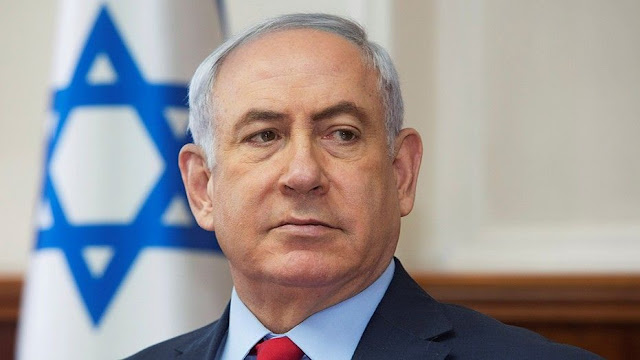 URGENT  UPDATE 11:30 AM EDT --- ISRAELI STOCK MARKET CRASHING - INVESTORS PULLING MONEY OUT AND RUNNING - NETANYAHU SPEECH ON IRAN IN LESS THAN 90 MINUTES . . . . WEALTHY SEEM TO KNOW: WAR.
In what many are saying could be an announcement of WAR with Iran, the Israeli government has announced Prime Minister Netanyahu will address his nation tonight at 8:00PM local time.
COVERT INTEL: My former colleagues in the Intelligence Community tell me that Netanyahu will reveal "dramatic" information about Iranian nuclear project. This after urgent session of the Israeli security cabinet earlier today.
According to INTEL sources, when Cabinet Members heard what is taking place, most of them (not all) respectfully but adamantly INSISTED the Prime Minister alert the nation.
My sources tell me he will reveal that over 200 large surface-to-surface missiles were destroyed at an Iranian Base inside Syria, and the _only_ purpose for missiles such as that, would be to attack Israel from Syria.  Due to the proximity of such Syria=based Iranian missiles, Israel would not have enough time to warn its people or to take defensive action in the event of a launch.
Netanyahu will tell his people that these missiles are designed for a surprise "First Strike" against Israel.  It is not yet known whether the Prime Minister will announce War.
Israel is about 7 hours AHEAD of the U.S. East Coast in terms of time zone.  So around 1:00 PM eastern US time the address to his nation should take place.
There are further Cabinet meetings planned and senior cabinet ministers are changing their schedules for tomorrow, along with military visits being cancelled.

This is very telling. It feels like we won't even make it to May 12th or 14th without some kind of major escalation taking place. May is gonna prove to be one heck of a month!
UPDATES LIKELY . . . . Check back.

ISRAELI SECURITY OFFICIALS URGENTLY BRIEFING WORLD LEADERS BY PHONE AT THIS TIME -- (Editor's Note: This is waaaaaay not good.  If Netanyahu's address to his nation was simply going to be a speech, thee would be no need or reason to "urgently brief world leaders."  The fact that such urgent briefings are taking place HINTS that Netanyahu's speech will be to tell his people he has already ordered attacks upon Iran and that those attacks HAVE COMMENCED.   Of course, this is NOT CONFIRMED, but rather merely my analysis, and I'm pretty good at this national security Intelligence stuff; which is why the FBI had me working with the on the Joint terrorism Task Force for years.   Stay tuned.  World War 3 could break out within hours.

Israel Closes Airspace Near Syria Border Ahead Of Netanyahu Speech With "Dramatic News About Iran" . . .  Israel has closed its CIVILIAN airspace near the Golan Heights and the Israel-Syria border, most likely in anticipation of one or more bombing/missile attacks on Syrian territory.
ISRAEL CLOSES AIRSPACE WITHOUT WARNING - VERY RARE

NORMALLY THERE IS A WARNING AHEAD OF TIME
Editor's Note: The only reason to tell civilian aircraft to "Divert Immediately" is because military action is commencing and fighters/bombers are ALREADY IN THE AIR! Rumors on the airspace closures are that Israel has detected hostile prep in Syria against Israel

Israeli defense officials have told their American and Russian counterparts that if Iranian-backed forces attack Israel from inside Syria, Jerusalem will not hold back from retaliating with direct strikes against Tehran or other targets in Iran.

The Israeli stock market crashing after Netanyahu's office said he'd be issuing a statement on a "significant development regarding the nuclear agreement with Iran"  Word in wealthy circles is that the rich know WAR will commence today and they are pulling out their money and running like hell.

Two Israeli opposition parties withdraw motion of no confidence in Netanyahu, due to the security situation.  (They were just given an urgent briefing, which tells us something.)

This is my own addendum
P.S (SMR)

An overnight missile attack in Syria's northern region has killed 26 pro-government fighters, mostly Iranians, a Syria war monitoring group said Monday.
The Britain-based Syrian Observatory for Human Rights said the attack appears to have been carried out by Israel and targeted an arms depot for surface-to-surface missiles at a base in northern Syria known as Brigade 47. The Observatory said four Syrians were also among casualties.
It said the death toll could rise as the attack also wounded 60 fighters and there were several others are still missing.
The attack comes amid rising tensions between Iran and Israel following an airstrike earlier this month on Syria's T4 air base in central province of Homs that killed seven Iranian military personnel. Syria, Iran and Russia blamed Israel for that attack. Israel did not confirm or deny it.

Minutes before it was scheduled to begin, the Likud canceled its celebratory Knesset opening faction meeting due to Netanyahu and several other ministers still being in Tel Aviv for a Security Cabinet meeting on the Syria strikes.
COVERT INTEL   Iran has called-up its QUDS force; a special forces unit of Iran's Revolutionary Guards responsible for their extraterritorial operations. The Quds Force reports directly to the Supreme Leader of Iran, Ali Khamenei.  Its commander is Major General Qasem Soleimani and his deputy was Hossein Hamadani. While "little is reliably known" about the force,  as of 2007, its size was estimated at 15,000 troops. The United States has designated the Quds Force a supporter of terrorism since 2007.
Israeli Emergency Cabinet meeting has ended; lasted about 90 minutes.  This was a very urgent, very serious meeting. Not about what has happened but what is planned from both sides. The flames of war just got a bit hotter.

Iran Leader To Israel: We Will Strike You in Retaliation 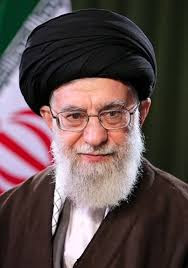 Iran’s Supreme Leader Ali Khamenei said on Monday Tehran will respond to the strikes against its facilities in Syria.

"Now for every your strike you will get retaliatory strikes," Khamenei said. The Supreme Leader warned that "the era when after delivering strikes the adversary managed to avoid a response is over."

The statement was a response to a missile strike on positions of the Syrian army and armed units of Shia militias fighting alongside with Damascus. A Syrian military source earlier told the SANA news agency that the strikes were carried out overnight to Monday against the outskirts of Hama and Aleppo.
According to Sky News Arabiya TV, the strike destroyed a large depot with Iranian weapons 10 km to the west of Hama (220 km from Damascus). The report said there were deaths among the Syrian forces and Iranian military advisers.

More from the "alarmists"

Emergency Broadcast, Mike Pompeo visits Israel and before he leaves the country bombs begin to fall on Syria. We have learned tonight that the US and British fired rockets from Jordan this could spread into a massive war Links: