"Tommy warned us about these rape gangs.

You laughed and called him a racist
Tommy will die in prison at the hands of these gangs.
You will laugh and say it served him right"
Then you will remember YOU have a daughter"


The only thing I can think of is perhaps discussing something that is sub judice. Where is the ‘incitement’??

Why the media silence?


Arrested, tried, and sentenced within an hour: Tommy Robinson gets 13 months for livestreaming outside courthouse

Arrested, tried, and sentenced within an hour: Tommy Robinson gets 13 months for livestreaming outside courthouse

Jihad Watch,
26 May, 2018
Not only that, but it is very hard to get any information at all, as the police have imposed a gag order regarding this case — obviously they know how bad it makes them look, as the darkness of Sharia-compliant totalitarianism descends upon the UK. Future generations of free Britons, if there are any, will curse the name of Theresa May as the destroyer of free Britain.
Caolan Robertson is saying that this is a death sentence for Tommy because, like Britain First leader Paul Golding, he will likely be placed in the general prison population, which is dominated by violent Muslims who will be quite happy to dispatch Tommy to jahannam.
Britain is finished, and its death as a free society is by its own hand.
An update on this story. “13 months!!!! – Tommy Robinson sentenced,” New English Review, May 25, 2018:

Caolin Robertson has now removed the earlier tweet (below) as he has been advised of the reporting restriction. 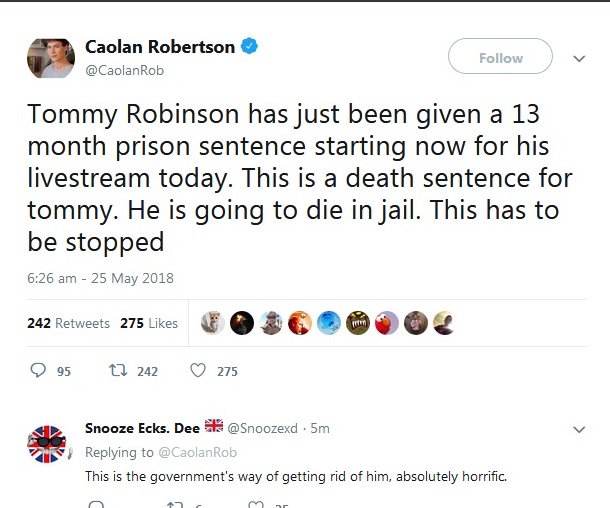 Tommy Robinson has just been given a 13 month prison sentence starting now for his livestream today. This is a death sentence for Tommy. He is going to die in jail. This has to be stopped

Tommy was subject to a suspendend sentence from an earlier matter – this has probably also been invoked, hence the length of sentence

Tommy warned us about these rape gangs. You laughed and called him a racist Tommy will die in prison at the hands of these gangs. You will laugh and say it served him right
Then you will remember YOU have a daughter #TommyRobinson

Rotherham Sex Survivor: I Told Authorities And They Did Nothing 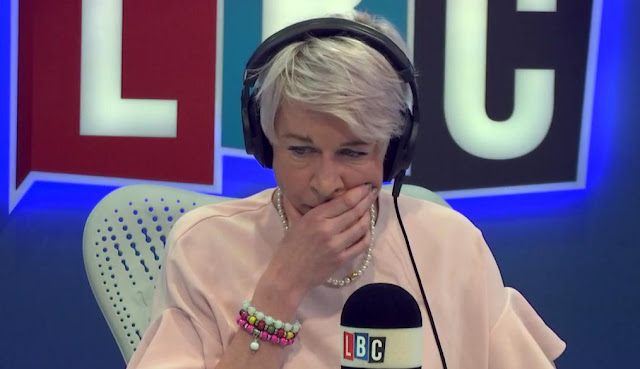 A survivor of the child exploitation ring in Rotherham called Katie Hopkins to tell her horrifying story.

Emma told Katie that she reported at the age of 13 that she had been raped, but authorities chose to do nothing - and told her not to mention the ethnicity of the assailants.


Now a mother, Emma revealed that she was delighted to have a boy, because she would have been terrified of the same thing happening to her daughter.


She told Katie: "I actually reported by abuse 14 years ago. I went to the authorities, my parents did. I sat and gave video interviews with the police, I was willing to work with them.


"I never once looked at my perpetrators for what race or religion they were. I simply looked at who they were and what they'd done.


"But as soon as I said the names, I was made to feel as though I was racist and I was the one who had the problem.


"That continued all the way through to the Jay Report coming out in Rotherham.


"I knew I wasn't racist, but that was used as a way to silence me."


Emma outlined how she went from a nice quiet family to hanging out with the Pakistani gang in Rotherham. She said it started off as exciting, but the ring soon began to take advantage of her and blackmailed her when she threatened to report them.


And when she did report them, she was let down by the authorities. She ended up having to move out of the country to stay safe from reprisals within the community.


Katie asked her whether she was pleased that, when she gave bith, she had a boy. Emma responded: "Yes. I think if I'd have had a girl, when she got to a teenager, it would have driven me mental really.

Posted by seemorerocks at 20:06