The latest on Tommy Robinsosn

Journalists in the United Kingdom have successfully challenged the reporting ban issued by a judge in the Tommy Robinson case.

Lizzie Deardon of the Independent wrote to the judge asking for the ban to be lifted and representatives from Leeds Live News made oral argumentS on Tuesday.

“I wrote to the judge asking for the order to be lifted and he said representatives of the press also made oral submissions in Leeds today,” Dearden, a Home Affairs Correspondent for the Independent, tweeted. “So to everyone accusing the ‘MSM’ of being part of some dark conspiracy, just remember that we’re the only reason reporting this is now legal.”

Robinson, a 35-year-old independent journalist and activist was arrested on Friday for suspicion of breaching the peace for his reporting and is now serving a 13 month sentence for contempt of court, as he already had a suspended sentence for a similar offense. He was arrested, charged and sentenced within five hours.

The judge also issued a reporting restriction, barring the press from covering Robinson’s case or imprisonment. Articles from the Daily Record, Birmingham Live, The Mirror, and even Breitbart News were all taken offline in the hours following his detention due to the order.

The arrest was over his livestreaming outside the trial of a child grooming gang. That trial is currently under a temporary reporting ban over concerns that the defense could successfully argue that the jury was tainted if there is public outrage over the details. That reporting restriction remains in place.

Robinson’s lawyer, Matthew Harding, told Leeds Live that his client was “mindful, having spoken to others and taken advice, not to say things that he thought would actually prejudice these proceedings.”

“Mr Harding said Robinson had been the victim of assaults while serving time in prison before and there had been ‘a price on his head’ during his last prison term with inmates being offered the reward of drugs and mobile phones to kill him,” Leeds Live reports.

Harding made this case during the hearing, but the judge stated that “people have to understand that if they breach court orders there will be very real consequences.”

Robinson is a husband and father of three.

German conservative MP Petr Bystron announced on Sunday that he is offering the political prisoner asylum.

“Freedom of speech is under attack all across Europe. I was at the AfD march in Berlin today, where people were waving #FreeTommy signs. I grew up under Communist dictatorship, and I will not let our freedoms be taken away again,” Bystron told The Gateway Pundit.

On Saturday, one day after Robinson’s imprisonment, hundreds of supporters flooded Downing St. to demand his freedom.

The arrest, imprisonment, and government-ordered media blackout of UK journalist and activist Tommy Robinson has set off a firestorm of protests around the world.

Free speech advocates and supporters of Robinson's movement from Melbourne to Berlin came out by the thousands to protest the Friday arrest outside of Leeds Crown Court while Robinson was reporting on a pedophile grooming trial via Facebook livestream. Within six hours of his detention, Robinson was slapped with a 13 month prison term for violating a prior suspended sentence for a similar offense.


“A big police van with about seven police officers pulled up and arrested [Robinson] and told him to stop live streaming,” Robinson’s producer told RT (before their article (archived) was scrubbed from the internet). “They said it was incitement and a breach of the peace.

“No peace has been breached – there were two other people there and he’s been perfectly quiet talking into his phone. [The police] said nothing about the court proceedings. It’s very strange.”

Equally as disturbing are the implications of a court-ordered media ban, making it a criminal offense for news outlets operating in the UK to cover Robinson's arrest and incarceration. In a page straight out of George Orwell's 1984, several news outlets were forced to pull articles which were published before the ban.

Mass protests broke out following Robinson's arrest - the largest of which was a crowd of thousands in the UK, demonstrating at the gates of Downing Street to demand the release of the conservative activist.

At least six demonstrations were held across Australia on Sunday in Sydney, Melbourne, Perth, Canberra, Brisbane and Adelaide.

Thousands protest the instant jailing of citizen-journalist Tommy Robinson, while social media goes dark after take-down notices. Is he out of order? Or does he have a point to make on free speech? Interesting Times for the UK. #FreeTommy #citizenjournalist

Hundreds demonstrated in the German cities of Berlin and Dresden, while German MP Petr Bystron has offered Robinson political asylum over concerns for his safety in prison.

“Tommy Robinson is a political prisoner, whose life is in clear and pressing danger. We have to do everything we can to make sure he is granted political asylum,” said the office of conservative German MP Petr Bystron in a Saturday statement provided to the Gateway Pundit's Cassandra Fairbanks. 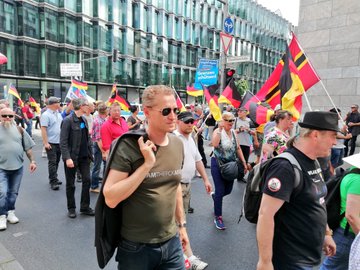 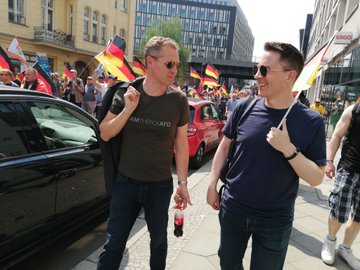 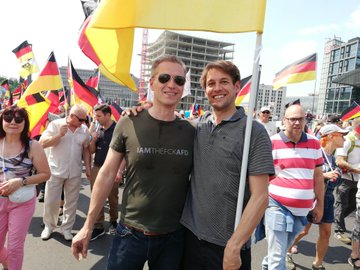 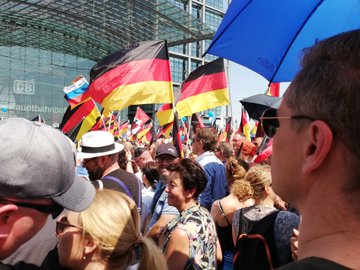 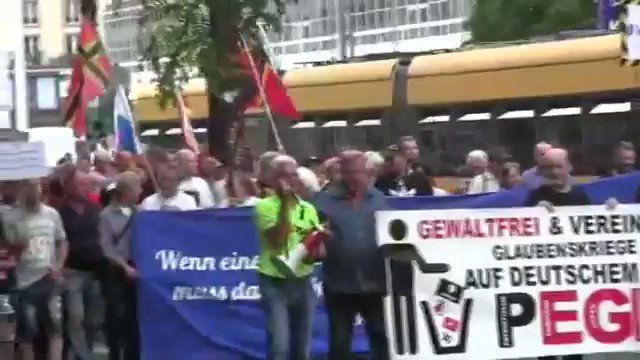 Dutch MP Geert Wilders showed up at the British Embassy in The Hague to deliver comments.

"I am here on behalf of millions. Freedom of speech is being violated all over Europe and also in Britain. Restore freedom of speech." -Geert Wilders, Dutch MP

Wilders penned a letter to the Dutch Minister of Foreign Affairs over the weekend with five questions about Robinson's situation.

Parliamentary questions to the Dutch Minister of Foreign Affairs about the arrest and safety of Tommy Robinson.

Robinson, 35, rose to fame as a conservative activist and founder of the English Defence League in Luton, Bedfordshire in 2009. After retiring from the party in 2013, Robinson has continued to advocate for British nationalism and against unchecked migration into Europe.