Israel airstrikes allegedly in response to fire from Gaza 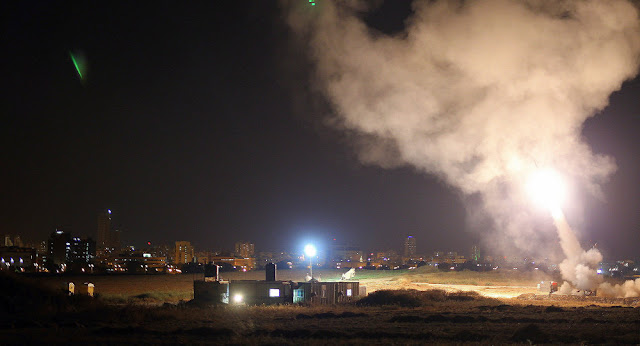 
The Israeli military is "operating in the Gaza Strip," an Israel Defense Forces spokesperson said, adding that "explosions heard" in this area are directly related to the IDF's operations.

"The IDF is currently operating in Gaza Strip. The explosions heard are related to this activity," the IDF spokesperson said on Twitter.
Palestinian media reports have also said that Israeli forces attacked targets in Gaza.
According to Israeli news site Haaretz, the Israeli Air Force conducted 30 strikes, though it's unclear if this referred to the number of IAF aircraft in the operation, the number of projectiles fired, or the number of targets attacked.
Rocket sirens have started alerting residents of potential rocket fire after the IDF announced it was undertaking a military operation.
A Snapchat video shows people laughing and joking around near a soccer field before a rocket lands nearby. "Those guys should have been [in] a bomb shelter," said Anna Aronheim, a Jerusalem Post reporter and security consultant.
Israeli reporters have shared footage of what they say is the Iron Dome defense system shooting down incoming mortar and rocket fire.
Sirens went off in Hof Ashkelon, Sdot Negev and Sha'ar HaNagev Regional Councils, the Israeli military's spokesperson noted
An Israeli public broadcaster has shared footage of what he reports is a rocket evading the Iron Dome defenses and hitting Israel.

BEIRUT, LEBANON (12:40 A.M.) – The Israeli Air Force resumed its bombing of the Gaza Strip in response to new shelling by the Palestinian forces , the army’s press service said.

The exchange of blows continues, despite the emergence of a number of media reports on the readiness of the parties to observe a ceasefire through the mediation of Egypt.

“The IDF is now operating in the Gaza Strip,” the army said.

This is the second time in the last 12 hours that Israel has launched airstrikes in the Gaza Strip.

During the first attack, the Israeli Air Force claimed that it attacked 35 Hamas and Islamic Jihad targets.

According to the Israeli military’s reports, about 70 missiles and artillery shells were fired from the Gaza Strip at 20.00 Moscow time, some of them were intercepted by the Iron Dome missile defense installations.

Tuesday’s exchange of hostilities is the largest confrontation to take place between the Israeli and Palestinian forces in the last four years.

These reports of Hal Turner's are coming from ISRAELI sources. Judge for yourself the reliability.

ISRAELI ARMY SPOKESMAN
TONIGHT WE ARE GOING
TO WAR"
Hal Turner
30 May, 2018

ISRAELI ARMY SPOKESMAN STATES 'TONIGHT WE ARE GOING TO WAR'

Iran has threatened Iraq PM Haider al-Abadi to ally with Hashid al-Shaabi (Popular Mobilization Forces - Hadi al-Ameri) or else Baghdad will be attacked with 60 car bombs in one day . . .
-------
UPDATE --IDF REPORTING IRANIAN MADE ROCKETS NOW BEING FIRED IN TO ISRAEL FROM GAZA, IN ADDITION TO MORTARS
UPDATE 7:10 AM EDT -- VERY HEAVY AIRSTRIKES IN MULTIPLE LOCATIONS IN GAZA, ALSO TANK AND ARTILLERY FIRE IN NUMERMOUS LOCATIONS
Hamas and Islamic Jihad fired at least twenty-seven military Mortar Rounds from the Gaza Strip into surrounding communities in Israel over the past few hours.  It is apparently the largest such attack against civilians since 2014, and the Israeli Defense Force (IDF) is returning fire.
Islamic Jihad is calling it revenge for their militants killed by Israel yesterday. They are threatening to keep attacking and to escalate.

There have been 2 barrages of mortar fire in the last 2 hours.

This was the most significant rocket attack against Israel since 2014. After the launching of 27 mortar rockets against Israeli civilians living in the border communities near Gaza, we can expect a substantial response from the IDF. - IDF spokesman Peter Lerner

As of about 2:00 AM eastern U.S. time, 21 locations have come under siren alert in Israel.
Israeli Prime Minister Netanyahu is holding Emergency National Security meetings.
Hamas is reportedly evacuating from key locations; pulling back to hide themselves using women and children as human shields.
This is a developing story and live updates will appear below. Please check back.

For the fourth time today Israelis have had to rush to bomb shelters as sirens sounded indicating more rockets fired from Gaza. This time near Ashkelon a town of approx. 150K.

ROCKET FRAGMENTS FOUND IN SCHOOLYARD IN SDEROT
Rocket fragments were found in the yard of a school in Sderot, near the Gaza border, after a fourth volley of rockets were fired at Israel from the Gaza Strip. The Iron Dome intercepted a number of rockets that were fired and there were reportedly rockets that fell in an open field in southern Israel.

30 AIRSTRIKES IN TO GAZA IN THE LAST 2 HOURS

ALL OF IDF INVOLVED, WITH TANK, ARTILLERY, AIRCRAFT AND NAVAL FIRE (THE 30 ABOVE IS AIR POWER ONLY - NO NUMBERS YET FOR OTHER STRIKES)

The situation in which a terror organization fires into Israeli communities is unacceptable. Since noon we have been operating throughout the Gaza Strip in a series of attacks which has not been done since Operation Protective Edge" IDF Spokesman Brig-Gen.Ronen Manelis

MORE ROCKET LAUNCHES FROM GAZA IN THE LAST HOUR THAN 2016-18 COMBINED!

FORENSIC ANALYSIS OF ROCKET DEBRIS SHOWS ***IRANIAN-MADE*** ROCKETS BEING FIRED INTO ISRAEL BY TERRORISTS IN GAZA.

Breaking Shehab news agency: Israel confirms a soldier was injured in a mortar attack against an IDF army outpost near Gaza
ONE CIVILIAN ALSO WOUNDED IN A ROCKET STRIKE - MODERATE INJURY STATUS
MULTIPLE ROCKET ALERTS - LOOKS LIKE THEY ARE TRYING TO OVERWHELM IRON DOME WITH MANY LAUNCHES
ROCKET JUST REACHED 25KM INSIDE ISRAELI TERRITORY FOR THE FIRST TIME IN YEARS
AT LEAST 3 ISRAELIS INJURED (2 severely, 1 moderately) AFTER GUNFIRE AND ROCKET ATTACKS ON GAZA BORDER MOMENTS AGO
Additional sirens sounded in the city of Ofakim and the Eshkol and Merchavim Regional Councils. More details to follow
SMS Messages have been sent to certain people to prepare to be called up for an emergency call up.
52 SIREN ACTIVATIONS IN ISRAEL TODAY SO FAR

Rocket sirens sounded in southern Israel
Emergency security meeting to be held by Prime Minister, with members of defense establishment
Israel cuts off electrical power supply to Gaza Strip.
Israel Electric Company announced that a main line & facilities feeding electricity to the Gaza Strip was damaged in a rocket attack earlier today. Due to the damage 3 power lines to Gaza have been cut off and will only be repaired once it is safe to approach the facility.
Israel Railways: disruptions in rail traffic south of Ashkelon due to Gaza fire

Energy Minister Yuval Steinitz “We may have no choice, we will have to strike in Gaza and conquer it.. and end this terrorist regime.”

Israeli Channel 7 states that Israeli will respond strongly in the coming hours to the rocket attacks on Israel from Gaza, security meeting with Netanyahu now over
Israeli internal security minister,Practice of Assasinations against Gaza commanders must return after today's events.

Iran has threatened Iraq PM Haider al-Abadi to ally with Hashid al-Shaabi (Popular Mobilization Forces - Hadi al-Ameri) or else Baghdad will be attacked with 60 car bombs in one day, according to an individual close to al-Abadi

Egypt-brokered ceasefire reportedly negotiated in Gaza, slated to start tonight.
ISLAMIC JIHAD SOURCES SAYS A DEAL IS MADE TO DEFUSE THE SITUATION AND BRING CALM; REACHED THRU EGYPTIAN MEDIATION
Commander in Islamic jihad: Mediation is ongoing and MAYBE a deal is reached within hours. The resistance condition is stopping Israel escalation and aggression against Gaza.
(Hal Turner Comment: they only call a truce to regroup and collect the stones they threw, so they can throw them again tomorrow.
In my estimation, this is not over, it's far from over.  Confirming high level meetings today. )

UPDATE 4:12 PM EDT --
Lebanon has now joined the show. Rockets coming into Israel from there!!!
BREAKING: Israeli official: NO ceasefire deal has been reached between Israel and Palestinian terror groups
NOTE: I HAVE BEEN OFFICIALLY ASKED TO SLOW DOWN MY RAW DATA REPORTING SO AS NOT TO GIVE AWAY ANY ISRAELI DEFENSIVE MOVES (LIKE AIRCRAFT LAUNCHING) BEFORE THEY TAKE PLACE.  I HAVE VOLUNTARILY AGREED TO THIS REQUEST BECAUSE REGARDLESS OF MY VIEWS ABOUT POLITICAL ISSUES INVOLVING ISRAEL, I SUPPORT ISRAEL'S EFFORT TO DEFEND ITSELF FROM ROCKET ATTACKS AGAINST ITS CIVILIANS.

Hearing from sources that Hamas has begun to massively reinforce the Gaza border with Israel. Militants may be preparing for imminent land operations.

As of this minute, it is 12 Midnight in Israel.  Let's see if the Arabs in Gaza CEASEFIRE or not.

Somehow, folks in Gaza managed to get their hands on GRAD Multiple Rocket Launcher Systems, which have begun firing into settlement areas in Israel around the Gaza Strip.  Below is a Wikipedia photo of a GRAD rocket launcher.

Leader of Hezbollah: If #Israel starts a war in Gaza, assets in Lebanon and Syria will retaliate by striking Tel-Aviv.

ISRAELI ARMY SPOKESMAN STATES 'TONIGHT WE ARE GOING TO WAR'

Multiple Intelligence sources on the ground in Israel have confirmed to me "almost continuous air strikes in Gaza by the Israeli Air Force" and have further confirmed "enormous and ongoing firing from multiple Israeli tanks."  MORE: Israel’s cabinet has moved to underground bunker for meetings now.

Israeli News Live
Israel strikes back with massive bombing of the Gaza strip after more than 70 rockets fired into Israel that has caused 6 wounded and landed even near a kindergarten center.