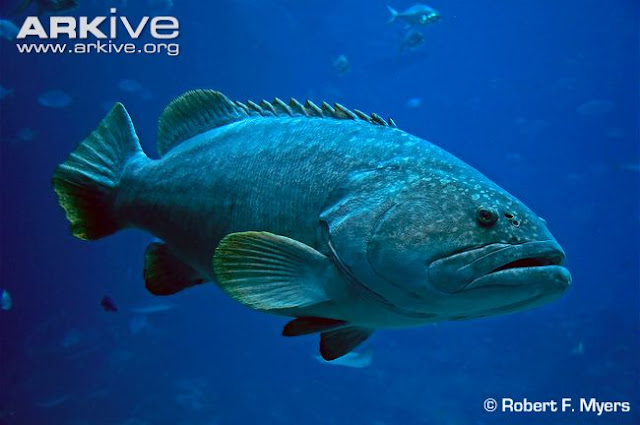 the Guardian,
29 May, 2018
Rare tropical fish from Australia have been spotted in New Zealand waters after a record-breaking hot summer and warm ocean temperatures lured the creatures across the Tasman sea.

The Queensland groper, also known as the giant grouper, is the aquatic emblem of the state and was spotted swimming around the wreck of the HMNZ Canterbury in the Bay of Islands on Sunday, more than 3,000 kilometres away from its usual cruising spots on the coral reefs and estuaries off the Queensland coast.

New Zealand experienced its hottest summer on record this year, largely propelled by a “marine heatwave” during which sea temperatures rose as much as six degrees in some areas, and 2-4 in the region where the groper was spotted.

Figures released by the National Institute of Water and Atmospheric Research found the average temperature during January was 20.3C – more than three degrees above normal.

The Queensland groper, a bony fish that can grow up to three metres long and weigh 600kg, is a protected species in Australia, was spotted and recorded by a skipper from Paihia Dive, a small coastal town in the far north of the country.

The fish are known for their curious natures, and often approach divers. Craig Johnston, owner of Paihia Dive, said it was “very rare” to see them, and the odds of their survival were slim once sea temperatures dipped below 18 degrees.

“This is unusual, I’ve been working in the industry 20 years and there hasn’t been a season like this before, it’s quite incredible,”

Johnston said Australian marine life end up in New Zealand when they “hop on” the East Auckland current, which begins life as the East Australian current and runs along the coast before making its way to New Zealand and the Pacific Islands.

The water in New Zealand was generally too cold for the fish to breed, and they would usually die by winter.

Sightings of marine life not usually present in New Zealand waters have been noted around the country this year, including kingfish in Dunedin Harbour, garden eels in the Kermadec Islands (1,000km north of New Zealand), sergeant major damselfish, striated frog fish and Lord Howe Moray in Northland and lion’s mane jellyfish in Wellington Harbour.

The heatwave also led to a boom in land-based animals, including an explosion in the rodent population, which was predicted to increase 10-fold by the spring, due to an abundance in food supply.

Whether it's giant jellyfish or swarms of translucent bead-like creatures washing ashore, there's been plenty to pique Wellingtonians' interests at the beach this summer.
Last week social media lit up with questions about chains of gelatinous blobs washing up on Petone Beach.
National Institute for Water and Atmosphere (NIWA) jellyfish expert Dennis Gordon said they were not chains of jellyfish eggs, as some thought, but a peculiar creature called a chain salp. 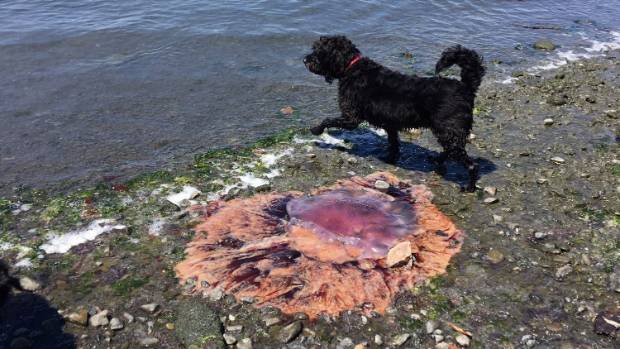 "Each of those beads can break off and function as an individual, and they will just bud off more chains," he said.

"Water goes in one end, and is pumped out the other, and there's a stomach and a tiny little brain."


The salps form chains by asexual reproduction and are totally harmless.


The same cannot be said for the over-sized jellyfish that have been found in the bay, with one Petone dog-walker photographing some of the strange new arrivals.


According to Gordon the general size of the jellies in the bay has been much larger than usual.

In the case of Petone Beach, the jellyfish pictures is of a lions mane, which can deliver a nasty sting, and is known to grow up to two metres in waters abroad.


There were three main types of jellyfish which appeared in Wellington Harbour - the lions mane, the spotted (also a stinger) and the moon jelly.

"The moon jelly is the clear, transparent one, about the size of a dinner plate or smaller. It has four purple crescents in it which you can see. That one doesn't sting."


The jellyfish will usually appear in spring, with numbers booming as increased sunshine and warmer waters increase the amount of plankton, which the jellies prey upon.

Despite being frequent visitors, Gordon said the location where the creatures reproduced was an enduring mystery.


"The way they reproduce is they put eggs and sperm into the seawater, they get fertilised, and the little larvae that forms in that fertilisation drops to the sea floor and there it metamorphoses into a little sea anemone type thing."


Sea gooseberry were also common in the bay, and to the untrained eye they looked like thumbnail-sized translucent blobs.


Look a little closer and you will see eight distinct bands of hair which turn iridescent in direct sunlight.


"They have two long tentacles that stick out into the water, they have sticky cells on them, and that's how they catch their food."


Reports of thousands of tissue-like white flakes in the shallows have also caused some concern on Oriental Bay, but according to Niwa marine biologist Wendy Nelson the flakes could be sea lettuce but she would have to see them to be sure.


Luckily for Wellingtonians, none of the local plants or seaweed are poisonous or sting