How the US protects ISIS and al-Qaeda


Syria - U.S. Moves To Protect Al-Qaeda And ISIS in Daraa

The Syrian government and its Russian ally plan to clean up the southwest region of Syria around the city of Daraa. The move should open the M5 highway, Syria's lifeline, between Damascus and Jordan and secure the border with Jordan as well as the demarcation line with the Israel occupied Golan Heights.

The operation was supposed to start in a day or two, but the U.S. has now threatened to intervene. As the southwest Daraa governorate is infested with a large Islamic State (ISIS) group as well as al-Qaeda and associated groups the U.S.move must be interpreted as protection for these terrorists.

On July 7 2017 The U.S, Russia and Jordan agreed to set up a de-escalation zone in southwest Syria. The parameters were not publicized and the implementation lagged. Russia had offered to let its military police supervise the zone but the U.S. rejected that. The opening of the important M5 highway to Jordan which was originally part of the plan did likewise not happen. The ceasefire in the region was broken several times. There was also infighting between ISIS and al-Qaeda.

In November 2017 the presidents of the United States and Russia met and agreed to a Memorandum of Principals which covered southwest Syria. The memorandum was not published.

The neo-conservatives at the Institute for the Study of War (ISW) disliked the agreement. It headlined Southern Syria Deal Fails to Constrain Iran, al Qaeda. Israel had demanded that no groups associated with Iran should come near the zone, but no such rule was agreed upon. ISW also noted:

Al Qaeda has exploited the ‘de-escalation zone’ to develop a new durable safe haven along the Syrian-Jordanian border.

Neither al-Qaeda nor the Islamic State are covered by the de-escalation and ceasefire agreement. UN Security Council resolutions 2249 and 2254 demand that all UN members fight Al Qaeda, ISIS and individuals and groups associate with them. It calls upon UN member states "to eradicate the safe haven they have established over significant parts of Syria".

At that time ISW published a map of southwest Syria which shows the strategic positions taken by ISIS (grey), al-Qaeda (brown) and aligned groups (light brown): 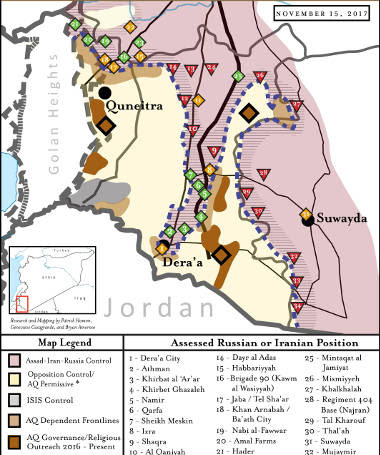 In December 2017 the U.S. stopped payments to "rebels" in the south west. Some of the groups, including al-Qaeda, receive money, weapons and fire support from Israel.

In April 2018 ISW published a new version of its map of the area. Amusingly al-Qaeda had vanished from it: 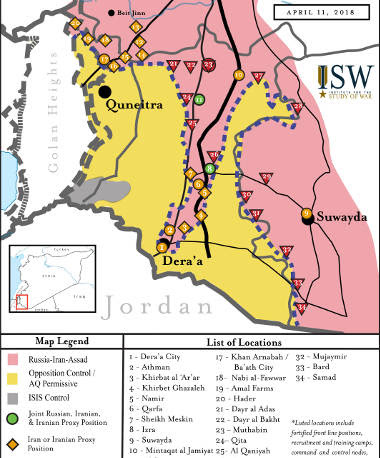 Over the last days Syrian helicopters have dropped leaflets over "rebel" held towns in the western part of the rebel held areas. They demand that the rebels give up fighting and reconcile with the Syrian government.

The Iranian ambassador to Jordan Mojtaba Ferdowsi-pour publicly declared that Iran has no role in any military operation in south of Syria. He added:

'After ending its mission in Syria, Iran will not remain in Syria and whenever Syrian government ask us, Iran will leave the country.'

It is obvious that the Syrian government and its Russian allies have all rights to fight ISIS and al-Qaeda independent of any de-escalation agreement. The UNSC resolutions even demand that. But the U.S. thinks different.

The United States is concerned by reports of an impending Assad regime operation in southwest Syria within the boundaries of the de-escalation zone negotiated between the United States, Jordan, and the Russian Federation last year and reaffirmed between Presidents Trump and Putin in Da Nang, Vietnam in November. The United States remains committed to maintaining the stability of the southwest de-escalation zone and to the ceasefire underpinning it. We also caution the Syrian regime against any actions that risk broadening the conflict or jeopardize the ceasefire. As a guarantor of this de-escalation area with Russia and Jordan, the United States will take firm and appropriate measures in response to Assad regime violations.
...

One wonders what "firm and appropriate measures" the U.S. has planned for. Strong words? Cruise missile attacks? Nukes?

I have not seen any reaction yet from the Syrian or Russian side.
---
[Moon of Alabama is currently asking for donations. Please support this site.]