The terrible (and deteriorating) human rights situation in Britain 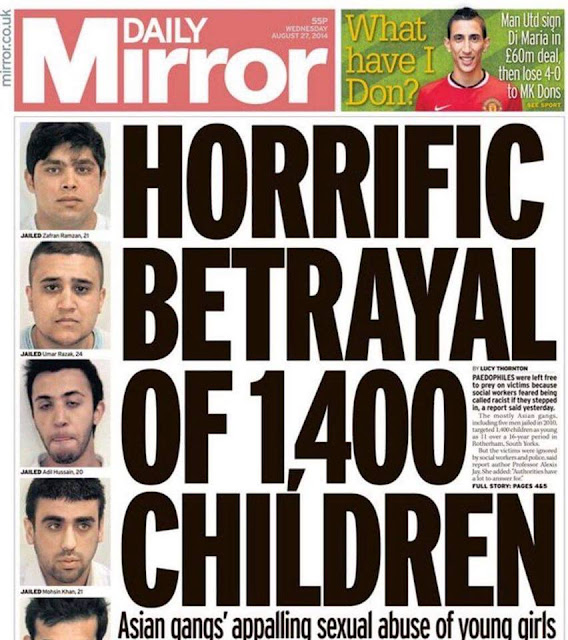 I have spent some wakeful hours thinking about recent events in Britain, trying in vain to make sense of things. Why is it that concern about sexual abuse and paedophilia are regarded somehow as a right-wing thing. The Left quite correctly points to atrocious human rights abuses (especially of children, in Israel but they completely ignore the most atrocious abuses at home.

Much of my attention has been focused on the case of Tommy Robinson and through that I have become aware of a evil can-of-worms which centres around paedophilia and the abuse of girls by Muslim (yes, Muslim!) grooming gangs. Tommy Robinson and his like could never be my political travelling mates – it is obvious that many of these people are zionist and quite happy to gloss over the war crimes of Britain from Afghanistan to Syria.


And yet, for all that it is clear that they are pointing to something very real and disgusting and that the British State is coming down hard on them for essentially blowing the whistle on an unspeakable evil while at the same time ignoring the crimes and who is committing them.

Meanwhile this is the message of Theresa May to the Muslim community. I doubt that she wished happy Christmas or Easter to her Christian community.


My theory and I don’ have too much (apart from deductive logic) to back it up is that we essentially have two stories. Abroad, the Empire has its own strategic interests in the Middle East and are more than happy to bomb and destroy the lives of Muslims in their thousands. They also aid and abet the evil regimes of Israel, Saudi Arabia and the gulf states. At home, they deadly afraid to “offend” their own Muslim populations.

Britain, especially, has been in a parlous state for some time – essentially bankrupt – and kept afloat by money from the Saudis and others. They are also involved in lucrative arms deals with these same companies – and thereby are complicit in war crimes in places like Yemen. The British government is unwilling to bite the hand that feeds them and so has allowed the Saudis, in particular to set up mosques and supply their own preachers that have been the one guilty of real hate speech. This has seen limited exposure on British television (all going back several years,nothing recently) but absolutely nothing has happened except that the government has doubled down on a campaign of harassment of those like Tommy Robinson who speak out.

My suspicion is that the authorities are terrified that if they do not stomp out any criticism of this lamentable situation they will have riots on their hands - started by Muslim mobs. I have heard quite plausible stories that the local imam will turn up at the local police station and say that if they not let one of their people go they will foment riots.  There are even stories that Muslim communities are able to tell the police who can patrol in their areas and who cannot.

All of this points to the deep social collapse of British society that accompanies economic stagnation, deep political corruption and financial crimes being carried out by the CIty of London. This is why we have a deteriorating human rights situation in Britain of which the Julian Assange and Skripal cases are just the most obvious.

Because his supporters will be perceived to be racist football hooligans by the liberals who inhabit leafy suburbs free of the social problems of working class areas like Luton, Leeds, Rochdale and of the Muslims that they bend over backwards to defend and because the liberals don't seem to be particularly concerned by cases such as the Rochdale and Leeds pedophile and "sexual grooming" (judging by the lack of coverage outside the tabloid media) the case of Tommy Robinson will be largely and studiously ignored.

And then there are cases such as the young victim of abuse who was imprisoned in a secret trial and kept in awful conditions that are detailed in articles below.

They never even see the light of day.

Here are just a few news stories to illustrate my point:

I listened to Katie Hopkins whom I had only known through attacks by the press. Turns out she is a lot more reasoned (and reasonable)  than I had been led to believe.

This speech by Tommy Robinson on his political suppression and the conditions he had (and has) to endure in British prisons came as a very unpleasant revelation to me.  It has to be seen in light of the cases below

Tommy Robinson of The Rebel.media was barred from giving this speech five times by various universities. It's about his experiences in "the British police state.

Here is the latest on his case.  The judge who sent him to prison for 13 months for 'contempt of court' didn't even bother watching his livestream. 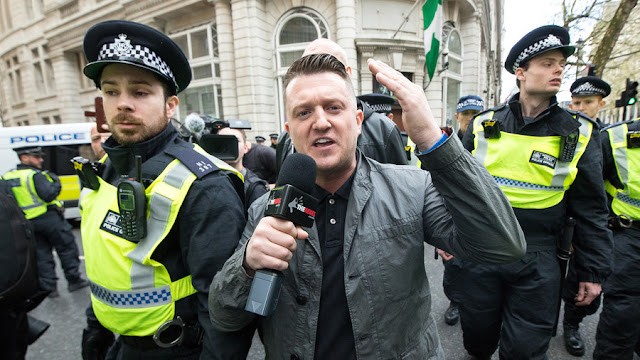 THE JUDGE who jailed Tommy Robinson for 13 months admitted he watched little of Robinson’s Facebook live stream that was used as evidence that Robinson was in “contempt of court.”

According to Robinson’s producer Caolan Robertson, who was in court during Robinson’s sentencing, Judge Geoffrey Marson QC admitted that he barely watched Robinson’s livestream, despite it being the reason he was arrested.

“The number one most significant thing that actually caused a little bit of a gasp in the courtroom from a couple members of the press was when the judge actually admitted that he hadn’t watched the full livestream of Tommy talking,” Robertson said on the Alex Jones Show on Tuesday. “He only watched a very, very brief moment of it before he made up his mind [to imprison Tommy.]”

In contrast, during the arrest, the police told Robinson he was “creating a breach of peace” based on “the content of what you’re streaming:”

In other words, the content the judge never bothered to watch.

It seems that Judge Marson didn’t base his decision to imprison Robinson exclusively on the evidence presented.

Additionally, Robinson and his film crew were reporting outside the courthouse where the Muslim grooming trial was almost over, and, according to Robertson, they were careful to only report on facts of the case which were already public given that Robinson was previously accused of committing contempt last year.

Interestingly, RT reported on this before the outlet scrubbed its article due to the judge’s gag order against press covering the arrest – meaning that this simple fact was kept hidden from the public:

RT spoke to Robinson’s producer, Caolan Robertson, about the confrontation outside of Leeds Crown Court and Robinson’s subsequent arrest.

“Their case has been going on for about a year,” Robertson said. “Tommy had all the publicly available information… and on that live stream he repeated the information that was already public. We were very careful with language [as to not risk being held in contempt of court].”

The judge imprisoned Robinson under the assumption that his reporting would cause a mistrial by influencing jury opinion. But since Robinson was reporting on publically available facts – and thus facts already available to the jury – how could this be accurate?

And to declare a mistrial, a judge would have to look at what information had been leaked and whether it could have reasonably swayed the opinion of a jury.

Since Judge Marson admitted he had never bothered to look into the content of Robinson’s livestream, how could he know that Robinson’s reporting was evidence of jury tampering?

And if Judge Marson wanted to keep a public attention away from the trial, he completely screwed that up by fueling an international news story with his arrest of Robinson and his sequential gag order against press coverage.

Judge Marson helped Robinson by shining a supernova of a spotlight on the trial which Robinson couldn’t have done alone; in short, Judge Marson created a Streisand Effect.

This story is from today. Great timing! 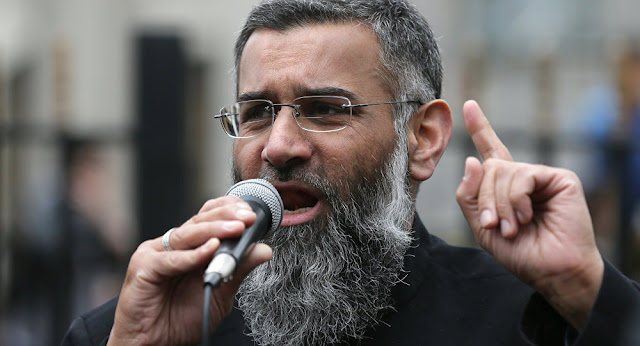 Mr Choudary who was imprisoned for urging Muslims to support ISIS and terror groups was sentenced to 5 years in jail, however, he is expected to serve just 2 and a half years.
It’s reported that Choudary is at a ‘separation centre’ in HMP Frankland.

The Police have expected a large backlash when he is released.

“It is likely to encourage some of his followers to become more vocal and defiant in their extremist behaviour,” ‘The Sunday Times’ quoted a Scotland Yard source as saying.

This story from another pedophile trial illustrates the double standard. Secret trials and solitary confinement for the whistleblowers/activists while sexual predators get legal aid to fight against deportation.

Anger as members of Rochdale grooming gang get legal aid to fight deportation... after already receiving £1m to unsuccessfully defend their criminal charges 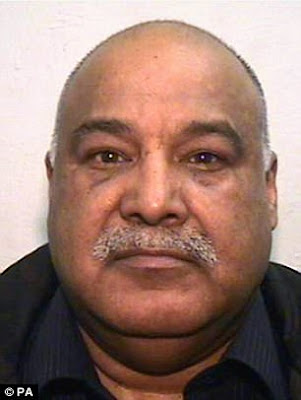 And here is another case - from a year or so ago - of a victim of horrendous abuse being treated as a dangerous criminal.

Melanie Shaw Given Two Years Following Secret Court Hearing
Desperate Letter To The Public From Political Prisoner Melanie Shaw
The Nottinghamshire child abuse whistleblower's treatment in jail has once again degenerated into something out of Solzhenitsyn, or worse. 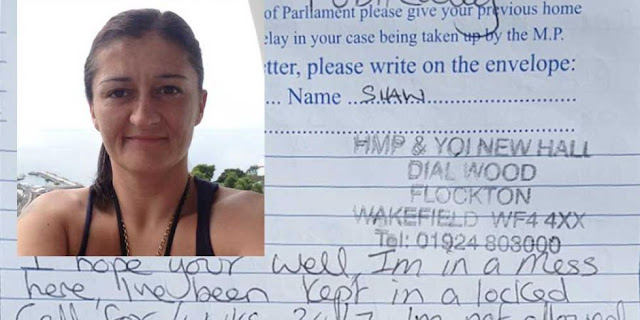 This morning, I received one of the most harrowing letters I have read in my life. It came from Melanie Shaw's prison cell.

UK Column News stands by its description of Melanie Shaw as a political prisoner convicted of undisclosed crimes in a secret hearing.

The clarity of both her handwriting and her analysis throughout this letter reconfirms to me that she is of clear mind and is being subjected to a cynical psikhushka regime to break her spirit and discredit or delete her testimony of Establishment child abuse in the Thatcher era.

Many of the prison "staff" who have neglected, mocked and abused her (including by threatening effective rape in her cell) at various East Midlands jails appear to be private corporate employees and/or to lack any suitable warder training, and they certainly seem to have no shred of humanity or intention to abide by the common law...