Syria Holds French US and Israeli Prisoners of War 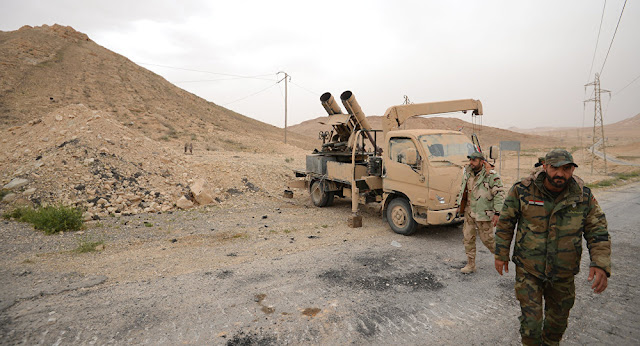 During a Sochi meeting with his Syrian counterpart Bashar Assad, Russian President Vladimir Putin stated that it is necessary for foreign armed forces to pull out from the country, as the Syrian army has achieved success in fighting against terrorism and is kicking off the political process.

Sputnik has discussed the foreign military presence in Syria with Akram al Shalli, an expert from the Syrian Crises and Preventive Wars Office.

"Vladimir Putin's statement during a meeting with Bashar Assad about the need to withdraw foreign contingents from Syria breaks the dreams of the aggressors, as if they could still try to accomplish their goals in the region by proxy criminal mercenaries," Shalli told Sputnik.

Al Shalli went on to say that the Syrian army had detained hundreds of foreign intelligence officers, including from the United States, the United Kingdom, Arab states and Israel.

“For example, there are about 300 only French soldiers of different ranks. We see attempts to pressure the Syrian government to free the captive foreign soldiers. But these dreams are not destined to come true, because now the odds are in favor of the government's forces and its allies,” he stressed.

The analyst has also touched upon the latest missile strikes by the US, France and the UK against Syria in response to the alleged use of chemical weapons by government forces in the city of Douma last month.

“Even the latest missile strike on Syria did not cause significant damage; the aggressors had reported the targets of the attack in advance. This was done so that the Western leaders could save face to their people," the analyst said.

According to Shalli, the detention of foreign military officers gives a double advantage to the Syrian government: firstly, they failed to implement their goals, and secondly, it is an additional trump card at the negotiating table with foreign forces.

"The Syrian peace settlement directly depends on the situation on the battlefield. And now the aggressors are constantly retreating, they are unable to launch any offensive on the army's position. Therefore, the Syrian government can set forward its terms," the analyst concluded.

The US-led international coalition has been conducting airstrikes against Daesh* targets in Syria since 2014 without a UN mandate or authorization from the Damascus government.

The US and France have reportedly enhanced their military presence in the war-ravaged country, with Paris in turn having promised support for the Kurdish militia, pressured by Turkish forces. The Syrian government has repeatedly stated that the coalition and Turkish forces in the country are "illegitimate" and has demanded that "invading forces withdraw immediately from the Syrian lands they have occupied."

Iran to Stay in Syria as Long as Damascus Wants - Tehran

Instead, in early May, President Recep Tayyip Erdogan announced new operations to come, in addition to the Euphrates Shield, its first direct military intervention in Syria to push Daesh away from the Turkish border, as well as prevent the advance of local Kurdish groups, and Operation Olive Branch in the city of Afrin to clear Turkey's Syrian border of Kurdish groups, which it believes are linked to the Kurdistan Workers' Party (PKK), listed as a terrorist organization by Ankara.

On May 20, the Anadolu news agency reported that French special forces had installed six artillery batteries north of the Baguz village in Deir ez-Zor privince, held by Kurdish militia in line with President Emmanuel Macron's earlier promise to support the Syrian Kurdish units.

The United States has also repeatedly been reported to have dispatched military columns and set up new bases in Syria shortly after President Donald Trump declared that the American forces would be leaving Syria “very soon” and “let other people take care of it” instead. His remarks contradicted earlier comments made by high-ranking officials at the Pentagon and State Department, claiming that US troops would maintain an open-ended presence in Syria.

The views expressed in this article are solely those of the speaker and do not necessarily reflect the official position of Sputnik.

*Daesh, also known as ISIL/ISIS/IS, is a terrorist group banned in Russia and many other countries.

Declared the spokesman of the Iranian Foreign Bahram Qasim, on Monday, his country's refusal of any call to withdraw the Iranian forces or militias from Syria, saying that “Iran will remain in Syria at the request of Damascus”.

Said Qasim in a press conference “no one can force Iran, something, Iran will remain in Syria as long as the demand of the market. standing and continuous”, in reference to the invitation of the Russian President, Vladimir Putin, last Thursday during his meeting with his Syrian counterpart Bashar al-Assad, to eject the foreign forces from Syria, including the Iranian forces.

The Russian media quoted the Russian president's Special Envoy for the Syrian settlement, Alexander freed, to permit Putin, about the withdrawal of foreign troops from Syria for all actors except Russia.

Said free, said, “this permit is for all groups to foreign military, which exist on the territory of Syria, including Americans, Turks, Hezbollah, and the Iranian people”.

And Iran's marginalization because of the Russian role in Syria, where location detection "tab you" of the Secretary of the expediency Council of Iran and Commander in chief of the former Revolutionary Guards, Major General Mohsen rezaei, last week, Presidents Putin and Bashar al-Assad, are working with the west to develop a political solution to the Syrian crisis through the Delete Iran from the Syrian scene, and that the Islamic Republic of Iran is the victim's elder to resolve the Putin of his decision to adopt the principle of Geneva for a political solution.

He stressed that the meeting which brought together Syrian President his Russian counterpart, Vladimir Putin, recently in Suzhou city, to be followed by the development of extremely important on the regional scene in general and on the Syrian Arena special, explaining that the repercussions of the events will reflect in particular on the presence of Iran on the coast of Syria, and that Moscow began to bargain with the West through the exclusion of the Islamic Republic of Syria.