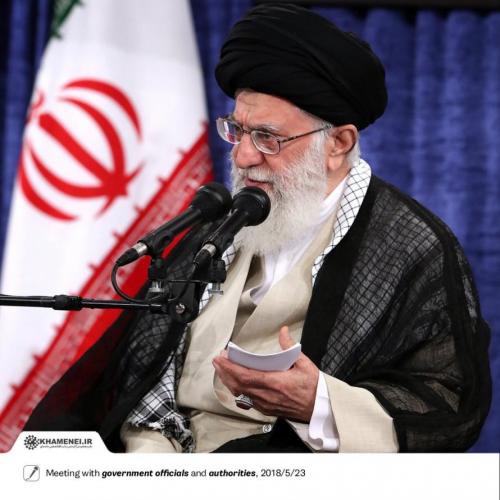 Two days after US Secretary of State laid out 12 draconian conditions for the US enter into a new nuclear deal with Iran, among which that Tehran must stop enrichment of uranium and never pre-process plutonium, allow nuclear inspectors "unqualified access to all sites throughout the country", withdraw all of its forces from Syria, end its support for militant groups like Hezbollah in Lebanon, stop sending arms to the Houthi militia in Yemen, release all U.S. citizens, and cease its threats to destroy Israel", Iran responded by listing several conditions of its own
In his first statement since Pompeo's Wednesday speech, Iran's Supreme leader Ayatollah Ali Khamenei set 7 conditions for the European nations if they want Tehran to remain in the agreement.

In the wake of Washington's threats to target EU firms dealing with the Islamic Republic amid US sanctions, the Iranian leader said that - first and foremost - European banks should guarantee and assure trade with Iran.
"European banks should safeguard trade with the Islamic Republic. We do not want to start a fight with these three countries (France, Germany and Britain) but we don't trust them either, Khamenei said. "Europe should fully guarantee Irans oil sales. In case Americans can damage our oil sales... Europeans should make up for that and buy Iranian oil."

Khamenei laid out the full list on Twitter on Trump's favorite social media network, remainder of continued on twitter where in a brief tweetstorm, he unveiled the following demands of Europe:
In conclusion, Iran's Supreme Leader warned that "if the Europeans hesitate in responding to our demands, Iran is entitled to resuming its nuclear activities. When we find out the #JCPOA has no benefits, one of our options is to resume cancelled activities."

Khamenei.ir@khamenei_ir
If the Europeans hesitate in responding to our demands, Iran is entitled to resuming its nuclear activities. When we find out the #JCPOA has no benefits, one of our options is to resume cancelled activities.


And so with both the US and Iran listing out conditions they both know will never be met, it is clear that not only will the US not return to the deal, but the EU may end up exiting the deal as well. Which means that as the "nuclear activity" wildcard returns, so will the threat of constant Israeli attack; it also means that any traders who are quick to price out geopolitical risk in the middle east may be surprised in the not too distant future.