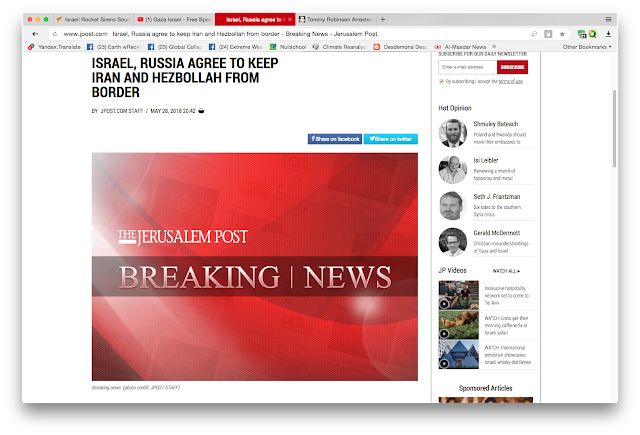 ISRAEL, RUSSIA AGREE TO KEEP IRAN AND HEZBOLLAH FROM BORDER

The Israeli Jerusalem Post claims that "after months of diplomacy between Jerusalem and Moscow, the two sides reached an understanding that Iran should be kept away from Israel's northern border with Syria, Channel 2 News reported on Monday evening.

According to the report, Israel and Russia agreed the Syrian army will be allowed to re-take control of southern Syria up to the border with Israel. Iran and Hezbollah, though, will not be permitted to take part in the takeover."

Kevork Almassian discusses this report by elaborating the upcoming offensive of Daraa and its implications on the Syrian conflict.

Israel loves to pretend that it is an important country which can move other governments to do its bidding.

During last fall, when Russia, Jordan and the U.S. negotiated about a de-escalation zone in southwest Syria, Israel demanded to exclude Iranian troops  and militia supported by Iran from a 40 or even 60 kilometer zone from the occupied Golan heights. Later Israel media announced success: Russia agrees to keep Iran, Hezbollah forces away from Israeli borderwrote JPost in October.

But such an agreement was only rumored by Israel. It was never made. Israel had demanded an exclusion zone but neither Syria nor Iran accepted that. The Russian/U.S./Jordan agreement was not published but it obviously included no such clause. In November 2017 Hizbullah successfully fought Syrian "rebels" in the Beit Jinn pocket, a stone throw from the Golan Heights. Iranian advisers have regularly visited and advised Iranian paid pro-government militia, marked green on the map, near the Golan line. Now Israel tries the same trick again. It sets expectations and announces agreements where none exist.

Russia fears Israel's strikes in Syria will undermine Assad's rule. Israel believes Moscow may agree to move the Iranians 60 kilometers away from the Israeli border

The change in Russia’s position has become clearer since Israel’s May 10 military clash with Iran in Syria and amid Moscow’s concerns that further Israeli moves would threaten the stability of Syrian President Bashar Assad’s regime.

Russia recently renewed efforts to try to get the United States involved in agreements that would stabilize Syria. The Russians might be willing to remove the Iranians from the Israeli border, though not necessarily remove the forces linked to them from the whole country.
...

After months of diplomacy between Jerusalem and Moscow, the two sides reached an understanding that Iran should be kept away from Israel's northern border with Syria, Channel 2 News reported on Monday evening.

According to the report, Israel and Russia agreed the Syrian army will be allowed to re-take control of southern Syria up to the border with Israel. Iran and Hezbollah, though, will not be permitted to take part in the takeover.

This is again nonsense for at least two reasons.

1. Russia has no way to keep Iran out of Syria or to tell Iranian advisors and militia where to go or not to go. The Syrian government will not do away with its best ally, Iran, which came to its help before Russia came in and will continue to help while Russia lowers its presence in the conflict. Were Russia to play "either-or" hardball with the Syrian government the decision would likely be against Russia and for Iran.

2. Iran already announced that it will not take part in the upcoming Daraa operation in southwest Syria.

Damascus, May 23, IRNA – Iranian Ambassador to Jordan Mojtaba Ferdowsi-pour said on Wednesday that Iran has no role in military operations in southern Syria and has no presence in the area.

Iran is concentrating the other militia it supports in east Syria for the continuing fight against ISIS and the U.S. occupation forces. (Hezbullah will stay where it is.)
The Iranian announcement was ignored by other media.
The shrewd Russian foreign minister Lavrov used the Iranian decision to offer a deal to the U.S.:

Russia said on Monday only Syrian army troops should be on the country's southern border with Jordan and Israel, ..
...


"Of course, the withdrawal of all non-Syrian forces must be carried out on a mutual basis, this should be a two-way street," Russian Foreign Minister Sergei Lavrov told a news conference in on Monday.

The U.S. is holding the border station of al-Tanf at the border triangle of Syria, Jordan and Iraq. In the same news conference Lavrov accused the U.S. of hiding ISIS forces in a nearby refugee camp. When Lavrov says "the withdrawal of all non-Syrian forces must be carried out on a mutual basis" he is offering the (already announced) Iranian pull-back from southwest Syria in exchange for a U.S. pull-out from al-Tanf in the southeast.

The Israeli defense minister Liberman was asked to come to Moscow on Thursday for talks with the Russian defense minister Shoigu. The Russians will likely reinforce earlier warnings against Israeli overreach in Syria. They will also press Israel to pull its strings in Washington in favor of the "mutual bases" deal.