Is Congress going to authorise war against Iran?

You try finding anything on this on mainstream media. At least some people are talking about this. 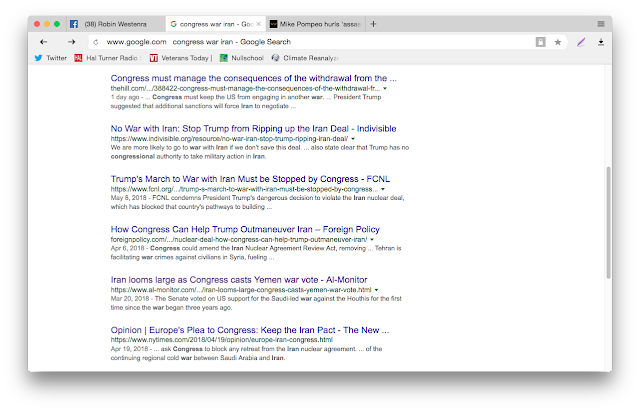 To his credit Tucker Carlson is, so is Hal Turner. Where is the anti-war movement.
CONGRESS DEBATES WAR WITH IRAN - May 22, 2018

Rep. Tulsi Gabbard (HI-02) spoke on the floor today urging support for her amendment in the 2019 National Defense Authorization Act (NDAA) that upholds Congress’s constitutional power to declare war. The congresswoman’s amendment strikes the language of Section 1225 of the FY2019 NDAA that authorizes the Secretary of Defense and the Secretary of State to develop and implement a strategy to counter the “destabilizing activities of Iran” and only afterwards inform Congress. The amendment will be on the House floor for a vote tomorrow, May 23.

National Defense Authorization Act (NDAA) that upholds Congress’s constitutional power to declare war. The congresswoman’s amendment strikes the language of Section 1225 of the FY2019 NDAA that authorizes the Secretary of Defense and the Secretary of State to develop and implement a strategy to counter the “destabilizing activities of Iran” and only afterwards inform Congress.
The amendment will be on the House floor for a vote tomorrow, May 23.

Congresswoman Tulsi Gabbard said:
“Make no mistake – the authorization in Section 1225 of the underlying bill authorizes our U.S. military to go to war with Iran, which is one of the main reasons why I voted against this bill in committee. This provision authorizes the Secretary of Defense and the Secretary of State to ‘develop and implement a strategy with foreign partners to counter the destabilizing activities of Iran.’
“The provision does not define what destabilizing activities they want our troops and taxpayer dollars to counter. It does not define a clear objective or end-state for our troops to achieve. In addition, this provision shuts the American people out from this decision entirely by circumventing Congress’s constitutional responsibility to declare war and giving unilateral power and unending authorization to ‘counter Iran’ to this and future Administrations – without defining in any way, shape, or form what the objective really is.
“It sidelines Congress and the American people entirely, with the only requirement being that the Administration report to Congress after their plan is being implemented, and only for the next 4 years, while the authorization for war has no expiration date.
“It gives after-the-fact license for what is already happening in the Middle East. Since 2015, without express Congressional authorization, US troops have been providing direct military support to Saudi Arabia in Yemen through information sharing, logistical support, and refueling Saudi warplanes which have dropped U.S.-made bombs on Yemeni civilians. The most recent attack was on a Yemeni wedding party, with two rounds of bombing killing more than 20 people and wounding dozens of others. This Saudi-led interventionist war has created one of the worst humanitarian disasters in history, worsening a situation that has led to mass starvation, cholera outbreaks, devastation, thousands of civilian deaths, and tens of thousands of injuries.
“It gives total authority to the Administration to keep US troops in Syria, or any other country in the Middle East, as long as they deem it necessary – an intention clearly stated by members of this Administration. To name a few examples, UN Ambassador Nikki Haley said last month that US troops would stay in Syria indefinitely until their goals are accomplished – namely to counter Iran. National Security Advisor John Bolton said in a 2015 op-ed entitled ‘To Stop Iran’s Bomb, Bomb Iran’ that ‘the United States could do a thorough job of destruction, but Israel alone can do what’s necessary. Such action should be combined with vigorous American support for Iran’s opposition, aimed at regime change in Tehran.’ Secretary of State Mike Pompeo recently advocated that the US will ‘crush’ Iran with economic and military pressure unless it changes its behavior in the Middle East.
“It’s clear that if left unchecked, war hawks in the Trump Administration will drag our country into more Middle East wars, leaving destruction in its wake around the world and here at home. Trillions of taxpayer dollars have already been spent on these regime change wars in the Middle East since 9/11. Rather than dumping more taxpayer dollars in these wars as this provision authorizes, we should instead be investing in rebuilding our communities right here at home.
“For too long, the US has engaged in military adventurism and interventionist wars, sending our troops overseas, with no clear objective or end state. ‘Countering Iran’ is not an end state that our military or diplomats can achieve. Without a clear objective, you end up in endless war. So what is the objective of this authorization for war? Is it regime change in Iran? Regime change in Syria? More war against Iran in Syria? Yemen? I strongly urge my colleagues to consider the serious consequences of Section 1225 being enacted because it would authorize any or all of these actions. It is Congress’s responsibility and constitutional role to declare war. The American people have a right to a real debate on such a declaration. I urge my colleagues to support the passage of my amendment.”
Congresswoman Tulsi Gabbard (D-HI) is a leading voice for peace in Congress, advocating against counterproductive, regime-change wars, and standing up for Congressional authorization before military action. Most recently, she joined a bipartisan coalition of 88 Members of Congress urging President Trump to consult and receive authorization from Congress prior to ordering the use of US military force against Syria. She has also advocated for ending the regime change war in Syria and condemned US support of Saudi Arabia in the Yemen civil war.
CONGRESS DEBATES WAR WITH IRAN - May 22, 2018


Mike Pompeo hurls ‘assassination’ charges at Iran, but nobody knows what the hell he’s talking about
The US Secretary of State accused Iran’s Quds Force of targeted killings, yet Iran experts can’t name a single example
Ricky Tysdale

the Duran,
23 May, 2018
America’s chief foreign negotiator has a message for Iran: stop assassinating people.
The problem is, nobody from security experts to Iranian dissidents has any idea what the hell he means.

The Guardian picks up the story:

Mike Pompeo’s claim that the Iran’s Revolutionary Guard is carrying out “assassination operations in the heart of Europe” has bewildered security experts and Iranian exiles, who say they are not aware of any evidence for the allegation.

The new US secretary of state referred to the alleged assassinations in his first major speech on Monday, but devoted just a single line to it amid a litany

Experts told The Guardian there haven’t been any assassinations in which Iran is even considered a suspect, since the early 1990s.

Even the State Department’s spokeswoman was dumbfounded (which admittedly, is not a rare occurrence):

Asked about Pompeo’s statement, the state department spokeswoman, Heather Nauert, said: “He has information and access to information that I do not. I am not able to comment on that in particular but I can tell the secretary has assured me that there is a basis for that point in his speech and he stands firmly behind that.”

US diplomats specialising in Iran were taken by surprise by Pompeo’s allegations.

The startling charge comes at the same time as Pompeo’s announcement of a list of 12 impudent demands on Iran, most of which have almost no connection to geo-political reality.

Maybe Pompeo has spent too much time on the phone with Bibi Netanyahu lately, and accidentally confused the ongoing killing and abduction activities of Israel’s secret service, Mossad, with those of Iran.

On December 21, 2015, Israel killed 12 people in Damascus, including two Iranian intelligence officers, and several members of the Lebanese group Hizbollah.
Israel has even eliminated targets inside Iran itself. On January 11, 2012, Mossad was blamed for killing an Iranian nuclear engineer, Mostafa Ahmadi-Roshan, using a bomb in Tehran.

Mossad also is believed to have assassinated an Iranian general, Hassan Tehrani Moghaddam, who worked on Iran’s ballistic missile program, on November 12, 2011.
Nor is Europe excluded from the field of Israeli operations. Also in 2011, Mossad abducted Palestinian Dirar Abu Sisi from a train in Kharkov, Ukraine, and took him to Israel. Ironically, he was accused of having knowledge of the kidnapping of an Israeli.
So while nobody can name a single assassination conducted by Iran in the last 25 years – not least of which in Europe – multiple Iranians have been killed by Israel in the last decade, including inside Iran itself.

Yes, it seems Mike has definitely been hanging out with Bibi too long.

Of course, Donald Trump’s (or is it Netanyahu’s?) new Secretary of State has been waging a war of words against Tehran since long before he took over the top spot at Foggy Bottom.

Formerly one of the most jingoistic members of congress, Pompeo, “first in his class at West Point”, has argued for more forceful and aggressive US foreign policy towards Iran, Syria, and Russia – to name a few.

Posted by seemorerocks at 09:07