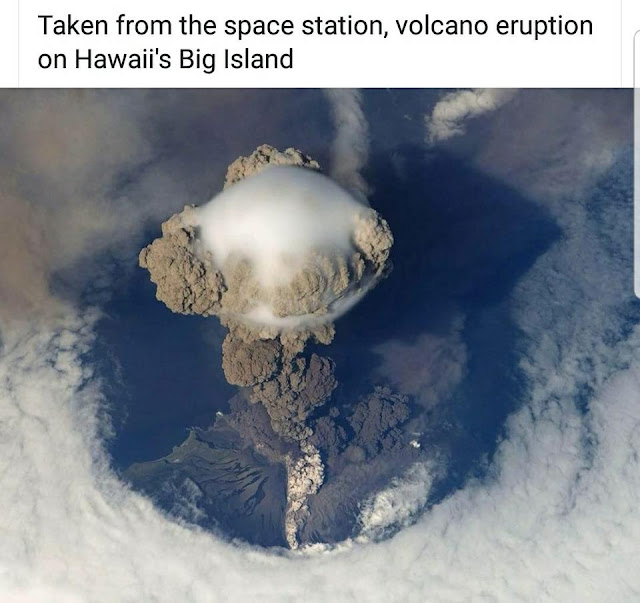 I do not want to be a fear-monger but have always operated from the assumption it's better to be more informed rather than yes.  Why is it that the media is happy to scare people with stuff that could happen some time in the future but refuse to adequately inform people of actual dangers.

I posted an article by Hal Turner which I have decided to take down.


He has indicated that government sensors indicate that 2/3rds of ENTIRE Southern Flank of Hawaii is breaking off and Pacific-wide Mega-Tsunami is possible.

You can read his earlier piece here:

There is a a lot of denial of this possibility (and comments from that corner are very arrogant and rude - along the 'fake news' line, but here is a scientific video from 6 years ago that posits this very possibility

I am no scientist (and certainly no geologist) but I have seen enough evidence to suggest that that part of the island is sufficiently unstable to make this scenario POSSIBLE.

Here is another video.

Powerful rivers of lava are threatening homes, roads and a highway in the lower Puna area where volcanic activity is steadily increasing.

Officials are going door-to-door to clear the area, and they are asking everyone to remain away.

Earlier in the afternoon, civil defense officials reported that at the current rate, lava could cross Highway 137 in as little as four to seven hours. Officials also said that the road may be closed at any time without notice.

Highway 137 is one of a few ways out of the area for residents in Lower Puna, the other route — Highway 130 — is currently only open to residents, and has already begun developing cracks.

The Highway closure would impact thousands of residents trying to get in or out of the lava-affected areas. Residents between Kamaili and Pohoiki are being advised to decide if they want to voluntarily leave the area, although they are not in immediate danger at this time.

There are now three shelters open on the Big Island for those who do choose to evacuate along with at least 1,700 other residents in the lower Puna area.

USGS scientists also announced on Saturday that fissures are now merging and connecting to other lava flows in the area. Fissures 16 and 20 have merged together and are producing a very voluminous line of spatter and lava fountaining.

The combined lava flow from fissure 20 advanced 1,000 feet in less than an hour early Saturday morning, and is traveling toward the coast at a rate of 300 yards per hour. The flow is now about about a mile and a half away from the coast.

On Friday, four people were airlifted to safety and at least four homes were destroyed in lower Puna on Friday and early Saturday as new fissures and older ones created lava flows, spit out towering lava fountains that lit up the night sky and set off thunderous gas explosions heard for miles around.

On Friday evening, civil defense officials said a fast-moving lava flow had crossed Pohoiki Road and was threatening an isolated area with at least 40 homes. Four people were subsequently airlifted out by county and National Guard helicopters, and four homes were destroyed.

Since the eruptions started more than two weeks ago, some 22 fissures have opened in lower Puna, claiming at least 44 structures in the Leilani Estates and Lanipuna Gardens subdivisions.

The eruptions took a particularly dangerous turn on Friday, with at least five separate fissures spitting out fresher, hotter lava from Kilauea's summit.

"With fresher, hotter magma, there's the potential that the lava flows can move with greater ease and therefore cover more area," said Janet Babb, USGS geologist, earlier in the day.

The incredible eruptive activity, which has been ramping up in recent days, comes as geologists say it remains unclear how long the eruptions will last.

Scientists have confirmed, though, that lava now spewing into lower Puna is new — from the quickly-emptying lava lake at Kilauea's summit crater some 20 miles away. The first eruptions into lower Puna were sending older lava from a 1955 flow into the community.

"It's been like hell," said resident Ikaika Marzo, who has been helping get much-needed information to those in lower Puna.

He described the sounds of lava in the area as 10 or 20 jets taking off at once and right in your backyard. "It's like huge grenades going off," he said. "It shakes the whole community."

"Leilani Estates evacuees must be alert to possible decreased availability of access," civil defense authorities said. "No access is allowed at his time for residents of Lanipuna Gardens due to high levels of dangerous volcanic gases."

And officials said while Highway 137 remains open, residents from Isaac Hale Beach Park to Kalapana should prepare for voluntary evacuation if the thoroughfare becomes threatened.

They're urging residents across the Ka'u District and Puna to be prepared for rapid changes in air quality because of the potential for ashfall or higher concentrations of sulfur dioxide.

Jim Kauahikaua, USGS geophysicist, said the amount of gas spewing from outbreaks in Leilani Estates and nearby Lanipuna Gardens is about the same as the amount that comes out of Halemaumau Crater. The difference? The crater isn't in the middle of residential communities.

"The thing to remember is this is putting out as much sulfur dioxide as Halemaumau does normally," he said.

Geologists are also monitoring widening cracks in a number of roadways in Leilani Estates, ground zero for the ongoing eruptions.

Steve Brantley, of the USGS, said the large cracks, which have torn roads apart in some places or created gaps of 1 yard or wider, are an indication that magma is continuing to enter the rift zone.

"The rift zone is being forced apart," he said. "I think clearly it points to the potential for additional eruptive activity" in lower Puna.

Marzo said he saw a crack on Nohea Street widen from about 3 feet on Thursday morning to about 10 feet wide later in the day. He also said that about 40 yards of the road sank.

"These cracks are definitely taking a toll on people getting to their homes," he said.

The developments underscore the scope of the disaster in the area, which has upended lives, destroyed homes and shows no signs of stopping.

In lower Puna, residents say the eruptions have turned their community into a "war zone."

"Everything is so uncertain. It's really nerve-wracking," said Debbie Kalaluhi, who can see the ongoing eruption of fissure no. 17 from her backyard. "You're very on edge. You have to really see it to believe it."

Mandatory evacuations remain in place for the Leilani Estates and Lanipuna Gardens subdivisions, home to about 2,000 people, but not everyone has heeded them and authorities haven't forced people to leave.

About 300 people are staying at three American Red Cross emergency shelters, while hundreds more residents are staying with friends and family.

Talmadge Magno, Hawaii County Civil Defense administrator, said Thursday that about 20 homes remain occupied in Leilani Estates — a fact that he expects will change as volcanic activity continues to cut off roads, gobble up utility lines and send toxic fumes into the air.

"Lava has a way of moving people," he said.

A presidential disaster declaration has been issued for the ongoing Kilauea eruptions, which have changed the landscape of a Big Island community, destroying dozens of homes, covering roads and gobbling up utility lines.

Tina Neal, USGS scientist-in-charge at the Hawaiian Volcano Observatory, has said there's no's telling how long the eruptions will continue.

Authorities have compared the eruptions of Kilauea along the south rift zone to volcanic activity in February 1955, in which at least 24 separate volcanic vents opened up and lava covered about 3,900 acres.

Back then, coastal communities from Kalapana to Kapoho were evacuated and "sections of every public road to the coastline were buried by lava" before the eruption abruptly stopped in May 1955.

The last time lava threatened Puna was in 2014, when a flow closed roads for weeks in Pahoa, forced evacuations and claimed several structures, including one home.